West the Best for Aussie in 85cc at WJMX

You are here: Home / News / West the Best for Aussie in 85cc at WJMX
Back 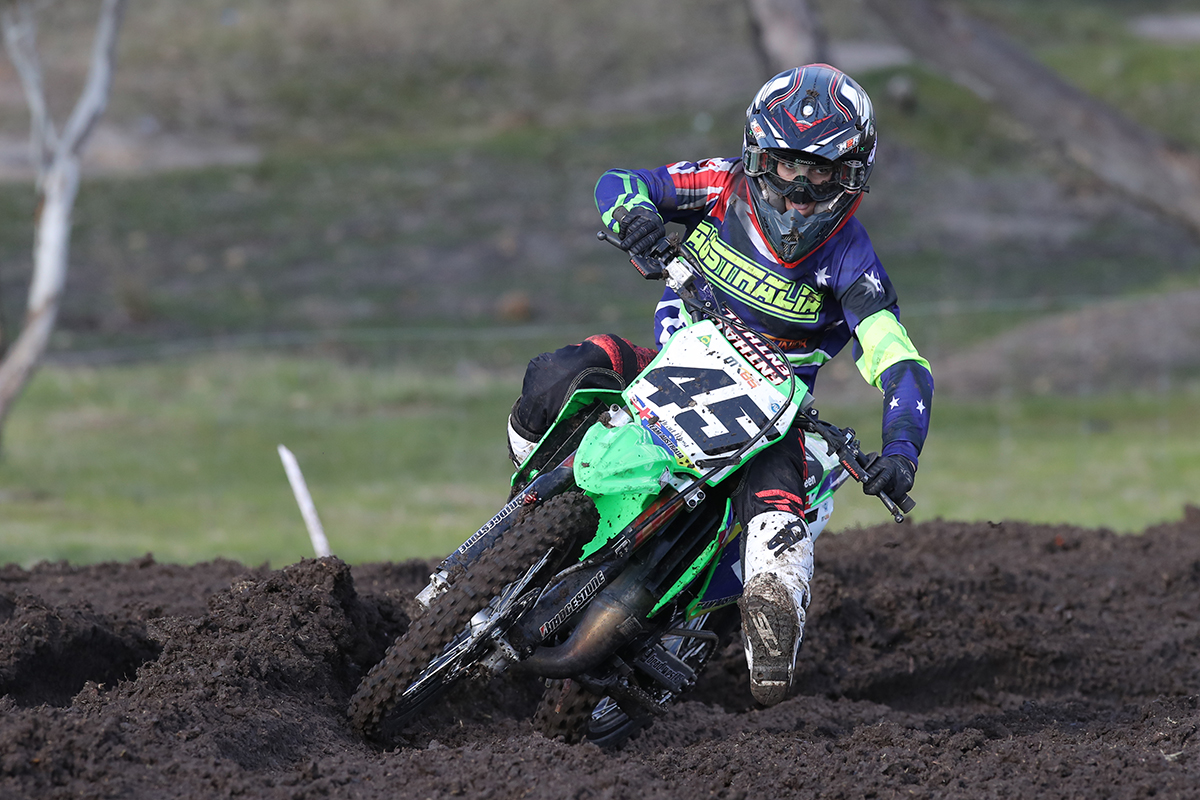 In the 85cc class here at the 2018 FIM World Junior Motocross Championship (WJMX) it was Brad West who led the way for the Australian riders, grabbing two top ten finishes on the weekend to grab eight overall. West’s efforts over the weekend saw him finish moto one in ninth and then he bettered that in moto two with an eighth-place finish.

Race One:
The first race of the day saw the riders battling a wet and slick track, but it was West who handled the condition the best for the Australian riders to come away in ninth. It was completely smooth from West who’s helmet visor was just hanging on by a thread by the end of moto one.

Zac Watson found his way into the top ten with a smooth ride aboard his Yamaha, finishing just behind West in tenth position.

Jackson Camilleri was the next best of the Australian riders as he collected 13th position on his KTM. Not far behind Camilleri was Ty Kean who finished 15th.

Ryder Kingsford just missed a top 20 finish as he finished 22nd, but a hard luck story was Connor Towill who got stuck behind the gate at the start, but he made his way back through the field to finish 23rd.

Race Two:
The second race of the day for the 85cc class saw West not get a great jump but a daring move around the outside saw the Kawasaki rider move into the top three on lap one. West was mixing it with the top five for a number of laps but just didn’t have the speed of the front few, settling for a well earned eighth position.

Similar to race one, Watson on his Yamaha rounded out the top ten. Just outside the top ten came Kingsford in 11th and behind him was Kean in 12th position.

The next best for the Australian contingent was Mancinelli who crossed the finish line in 16th position, his teammate Holding was just behind Mancinelli finishing 17th.

There was a pair of aussies who rounded out the top 20 with Alexanderson finishing in 19th whilst Jack Mather just couldn’t chase him down and finished in 20th.  A good result for Mather who was a non-starter in the first moto.

Just out of the top 20 was Towill, who had good speed through qualifying and practice but just couldn’t find his best today, settling for 22nd. Williams finished just behind Towill in 23rd position.

To see how all the Australian riders faired head to live timing, MA Website, MA Facebookor the MA Instagram.