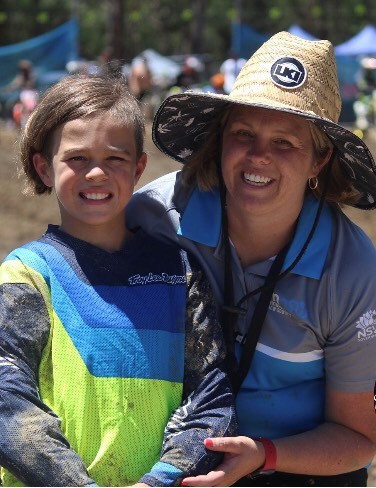 What got you into motorsport and volunteering?

It’s a funny story actually. My husband bought my son a motorcycle many years ago when he was six and we were invited to have our son ride at the local club. We didn’t know anything about the sport, but we all headed down to the club and supported our son! I was always really passionate about being there for my son and supporting his activities!

Taking him to the local club to learn to ride also ensured he was supervised in a controlled environment.

My son then became interested in riding Motocross, so we changed over to a Motocross club. I loved it so much that I got involved in the club, and have become quite involved in coaching, race secretaries and the like.

Nowadays my son races at a separate club to where I predominantly help out, so I don’t get to watch him compete as much as I would like.

How long have you been a volunteer with MA?
This year marks six years volunteering!

What’s your favourite thing about volunteering?
Giving back to the sport!

Most memorable moment whilst volunteering with MA?
Without a doubt being awarded Volunteer of The Year from Motorcycling New South Wales in 2017! It was really lovely to find out that the nominations came from six other clubs who recognised me for my support!

Best experience as a volunteer (best event etc.)?
I think my best experience has been seeing the Dirt X Series grow to where we now have over 300 competitors entered this year! This series also sees our club hire a track from other clubs, and this has now developed a really supportive and cohesive community in our area.

Best advice you’ve been given?
Preparation is key

Favourite discipline?
It would have to be Motocross!

Favourite track?
If I had to pick just one, it would be Mount Panorama Motor Racing Circuit. It’s such a beautiful area, where you can see the surrounding Valley and farms.

What 2019 event are you most excited for?
I am most excited for this year’s Dirt X series, which marks the series’ 10th Our next round is in Dargle, which is such a beautiful location in which to celebrate the huge milestone!