Tickets On Sale For Three Days Of Non-Stop Historic Racing

You are here: Home / News / Tickets On Sale For Three Days Of Non-Stop Historic Racing
Back 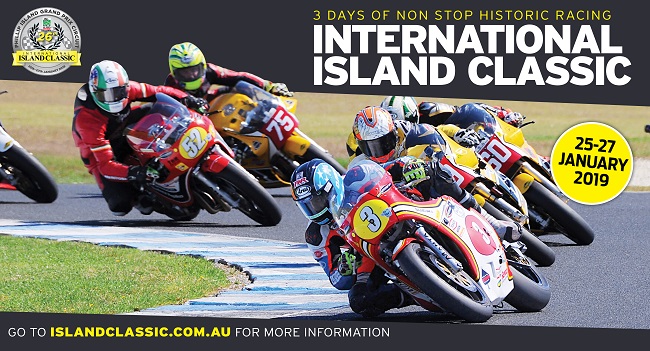 If you love bikes, there’s nothing closer to pure heaven than immersing yourself in a world of motorcycles, mechanics and memorabilia at the iconic historic event, the International Island Classic at Australia’s Phillip Island Grand Prix circuit.

Now in its 26th year, the Classic will once again roll into the island for the Australia Day long weekend from Friday to Sunday January 25th-27th, with 56 races on the agenda and tickets available now from www.islandclassic.com.au.

A celebration of a century of motorbikes, the event is a true bike fest with close to 500 bikes racing and on display, including old Indians, Nortons and Vincents through to vintage Triumphs, Harleys and Ducatis. There’s six historic categories from pre-WW1 bikes through Vintage (1920-1945), Classic and Post Classic (from 1946 to 1972) and the more recent Forgotten Era and New Era classes fighting for class honours and the Phil Irving Perpetual Trophy.

They all race hard, but when it comes to the dog-eat-dog competition the focus is on the International Challenge. Now in its 15th year, the Challenge will see defending champion Australia take on the USA and New Zealand on bikes manufactured between 1973 and 1984, piloted by riders boasting loads of experience and exceptional talent.

Teams from Australia, the US and NZ will fill the International Challenge grid for four, six-lap races, with the Aussies ready to defend the title they wrestled back from the UK in last January.

Captain Rex Wolfenden has released his team of star recruits including the squad’s ace performer of 2018, Adelaide’s David Johnson, who led the Aussies back to the winner’s circle after three years lagging behind the Brits. Johnson will be back on the Suzuki XR69, hoping to emulate his 2018 performance which included two wins and two seconds en-route to being awarded the Ken Wootton Memorial Trophy for best individual performance.

Also, back in the saddle after an Island Classic hiatus will be Isle of Man specialist Cam Donald and Melbourne’s Jed Metcher on the T-Rex Racing Honda.  Metcher, who just took out the Australian Historic Championship at Broadford in November, will race the Honda he campaigned to victories at the Island Classic in 2016 and 2017.

“At Broadford my bike felt amazing, and we have a bit of further development for the island.  I’ll be ready,” said Metcher who has taken a break from his international racing career to focus on his Race Center business in Melbourne’s Brunswick.

“I love the Island Classic, I just love the atmosphere.    I love the enthusiasm of generations of people who are in love with their motorcycles and just enjoy everything on offer from the paddock to the track.

“And of course, the racing is tough.  But it is friendly competition.  You know the sun shines, it’s Phillip Island, everyone who there is into it.  The Island Classic is really a good place to be.”

The Island Classic is the perfect Australia Day getaway without breaking the bank. A three-day adult ticket for the Island Classic, purchased in advance, is just $82, and free for children 15 and under (accompanied by a full-paying adult). You can camp at the circuit for four nights for just over $20 per night (with kids once again free) which is a bargain in anyone’s language.

Add it up and you can have a four-day weekend away, with four nights of on-circuit camping, and three days entry to one of the world’s great historic bike meets for the grand total of just $164* per adult and you can bring your kids for free!

Tickets for the 26th running of the International Island Classic, the largest historic bike meet in the southern hemisphere, are available on islandclassic.com.au or at the gate.