You are here: Home / Motocross / The Fourth edition of the Ride Green Cup this year in Australia FIM Junior Motocross World Championship
Back 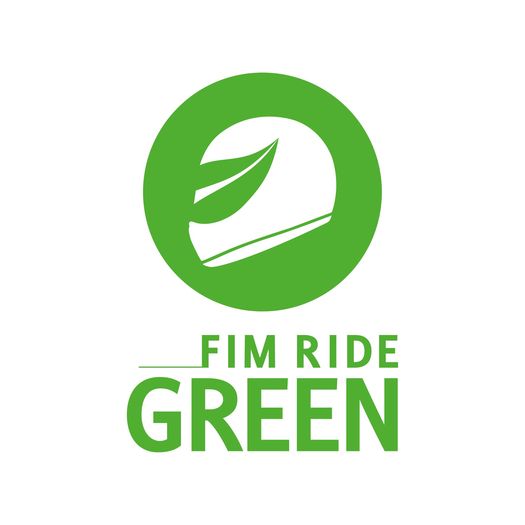 Dooen Recreation Reserve in Horsham Australia will be the perfect venue to host the FIM Junior Motocross World Championship in 2018 and the fourth edition of the Ride Green Cup, which is focused in raising awareness and incentivising the environmental education of the young participants, their teams, family circle and the fans in their communities and countries. The Ride Green Cup is part of a series of sustainable projects promoted by the Fédération Internationale de Motocyclisme (FIM) between its various world and regional Championships.
This year the Ride Green Cup will be presented with the full support of Horsham Motorcycle Club, Motorcycling Australia, the championship promoter Youthstream and coordinated by the CID/FIM.

The organisers of the contest have this year incorporated new activities that promote a positive environmental behaviour both in and out of competition.

This year the competition for the Ride Green Cup is based on the current World Environment Day theme of fighting pollution from non-appropriate use of the plastic in the world, reflected in the slogan:

“BEAT PLASTIC POLLUTION – If you cannot reuse it, refuse it” 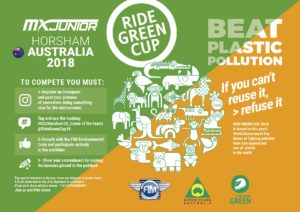 The team who wins must comply with a series of requirements concerning their environmental behaviour inside and outside the track and also to promote this behaviour among their sports circle and fans and will be invited to the podium to receive the award.

The jury will be composed by personalities and experts of the sustainable field.

Kattia Juarez, International Sutainabilty Director: “For the FIM, young riders represent a responsibility not only in sporting matters, security and fair play, but it also they represent for us the responsibility to show them the path to a sustainable sport. We are proud to launch the fourth edition of the Ride Green Cup, which every year becomes more popular among the participants and organisers. The ride green cup has a very important purpose: Education, awareness, respect and responsibility. The main actors are the younger riders who become the best representatives and examples through an environmental education designed for our younger riders. In a fun and competitive way we are raising awareness and establishing actions that lead to the sport being more sustainable. Our desire is that our sport becomes a vehicle for these values and good practices are applied at home and as a consequence the riders are an example for their community.”

David Luongo, Yousthstream Vice President: “Motocross has always been linked to the nature, so it is very important to respect it and to have conscience that our different actions can have a big impact on it. In our behaviour, our way of acting we are contributing to preserve it. Thank to FIM Ride Green Cup project, Youthstream is also very proud to be part of this education program where the kids will be taught in an enjoyable way on how to respect the nature and minimizing their impact while practicing their favourite motorsport. »