You are here: Home / News / The Broadford Bike Bonanza reaches its tenth year milestone.
Back 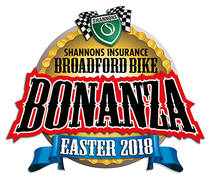 Shannons Insurance recognises a good thing when they see it and have stepped up to sponsor the tenth running of the cult classic that is now the Shannons Insurance Broadford Bike Bonanza (SIBBB). The initial concept to get out old bikes (anything pre-1990) left sitting under dust and rust in sheds and onto a track in a relaxed format has stood in good stead as the riders and spectators religiously set aside the Easter weekend as a must attend pilgrimage.

This tenth anniversary will see the ever-popular Speedway section run with a tribute to the legendary Neil (Billy) Street OAM, 1932-2011 and his contribution to Speedway as a rider, manager and engine manufacturer. Seven-time Speedway World Champion Jason Crump will be riding in tribute to Street, as will his dad Phil Crump on the four valve SR4 bikes Neil built. Loads of other stars have signed on too and the speedway exotica coming out is mind blowing.

The Vincent marque will be well represented on the road circuit with the brothers of the World’s Most Expensive Motorcycle coming out, recreated Series A models, the Irving Vincent show from the brains of the Horner Bros and the howling supercharged speedway sidecars from the Heavyside stable.  If these machines don’t get the hairs standing up on the back of your neck, I don’t know what will.

If Ron Angel hasn’t got the worlds most exclusive collection of exotic rare road racing motorcycles I don’t know who has. He has packed the RR ‘A’ Garages with $3M worth of motorcycles you have never seen and won’t see again once they leave this event.

The Trials bikes return with a special set of sections, the Enduro boys have a special track neighbouring the circuit and out into the Tallarook bush on Sunday, Racing BSA Bantams (possibly the most used, abused and tuned to within an inch of their lives motorcycles) will be on display and on the tracks, the Minibike Reunion dinner on the Friday after the exclusive use of the MX track on the Friday arvo will complement the huge Show ‘n’ Shine in the MX sheds too.

If that isn’t enough then the Saturday night Gala Dinner and interviews with International RR legend Barry Smith, Isle of Man TT sidecar riders Mick Alton and Chrissy Clancy, the Crump family, Phil Irving’s widow Edith and the presentation of the Motorcycling Australia Awards will keep you amused.

Catching the free shuttle buses around the circuit gets you to all the tracks, and you’ll hear the expert commentary of the indefinable Bob Johnstone at the Speedway, and the dulcet Will Hagon at the Roadrace. Say hi to ‘Sir Al’ Cathcart too as he cruises around the pits too.  Don’t miss out on the tenth anniversary of SIBBB.