You are here: Home / News / Monson/Summerhayes Complete Rare Double at Gillman Speedway
Back 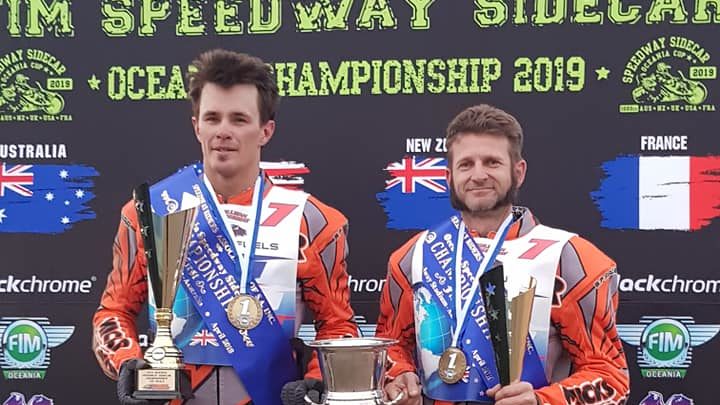 Warren Monson and Andrew Summerhayes have completed a historic back-to back win at Gillman Speedway, adding victory in the re-run 2019 FIM Oceania Speedway Sidecar Championship yesterday to their win in the 2019 FIM Speedway Sidecar 1000cc World Cup on Saturday. The pairing had a dominant weekend, winning all but one of their heats across the two events.

The pairing finished the night unbeaten in the heats, before taking out the final ahead of Brodie Cohen and Damian Egan in second place, Mark Plaisted and Ben Pitt in third. Shane Hudson and Adam Constable were the remaining crew in the final.

The final itself was a dramatic affair, requiring six restarts and two exclusions to finally leave Monson/Summerhayes and Cohen/Egan to battle it out between each other. By the time the chequered flag went out for the final time, it was Monson/Summerhayes on top once again, to leave them FIM Oceania Speedway Sidecar champions as well as World Cup winners.

Monson was thrilled to add the FIM Oceania Speedway Sidecar Championship to his trophy collection from the weekend. “Just as happy as last night!” he said on the podium. “It was very hard for us tonight, the track was very hard to read, and we just had to push through it.”

“I don’t think I’ve ever been in a final that had that many restarts! But we came through on top, so we’ve got to be happy with that.”

Defending champion Darrin Treloar had a day to forget, after finishing third, second and first in his first three heats he was struck with mechanical issues and took no further part in the event.

For more information visit www.gillmanspeedway.com. Follow FIM Oceania and Australian Speedway Championships on Facebook to keep up with all the latest news and information.