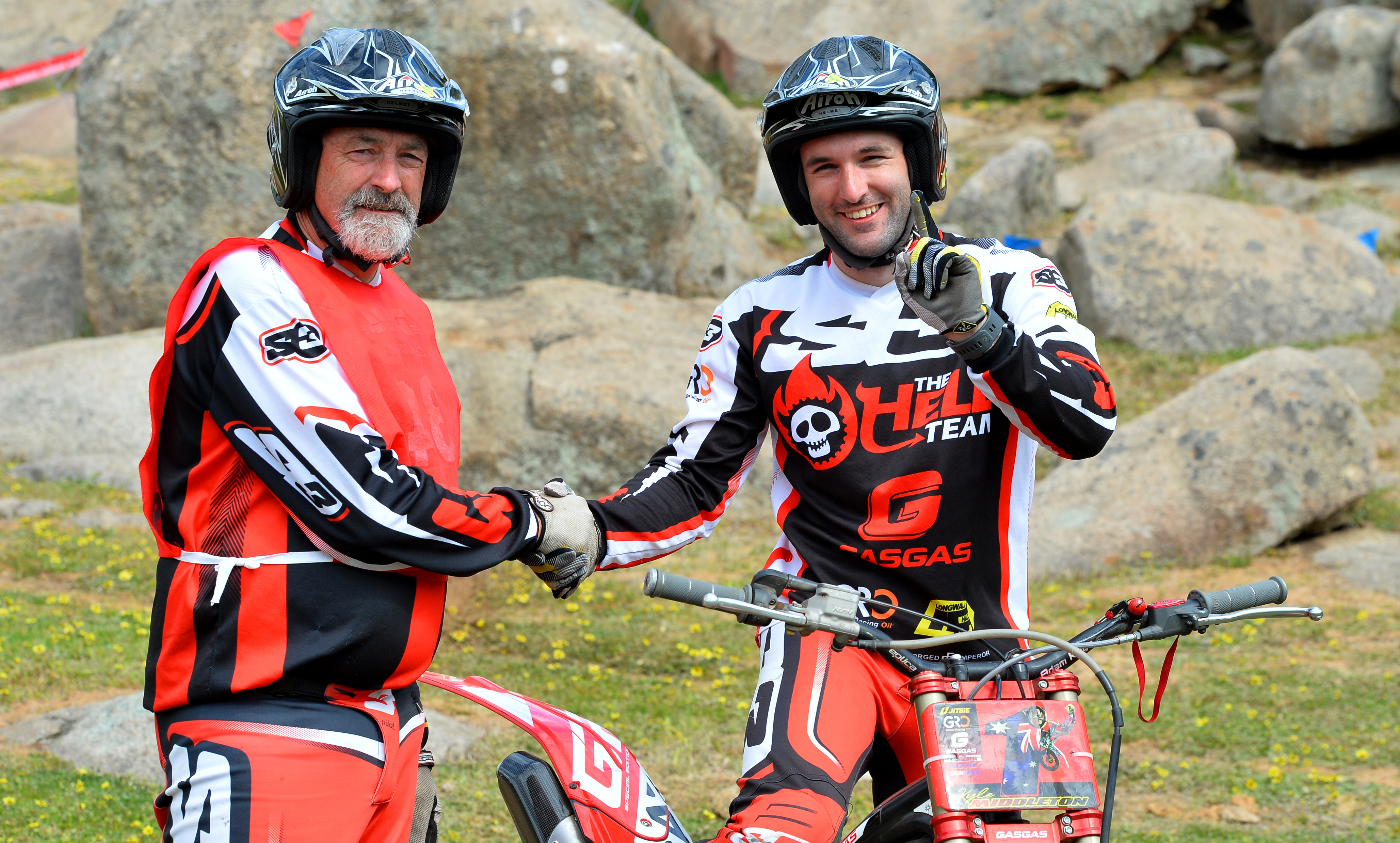 He came, he saw, he conquered. 28-year-old Kyle Middleton once again has re-written the history books by becoming the first rider to win six straight Australian Solo Championships, after he crushed his rivals at the 2018 Delecca’s Australian Trial Championship at Sedgwick in Victoria.

After scoring 14-points on Saturday, the New South Welshman went on to score 25-points on Sunday, which saw him finishing on top of the points tally with just 39-points to his name.

While Middleton performed so well against the competition, he didn’t feel as good yesterday, as he did on Saturday. This was simply because Middleton felt a bit ‘off’, as he was tired from the opening day of action.

Middleton’s second lap saw him digging deep, which went to plan for him. However, he started to have a couple of bad sections, which damaged his overall score a bit. Otherwise, it wasn’t too bad for Middleton, who entered the weekend with a bit of self-doubt.

The reason behind Middleton’s self-doubt was because after he came back from this year’s Scottish Six Day Trial in May, he returned back to Australia with a lot of injuries.

Since then, Middleton has really struggled with his body. There have been points this year where he honestly has thought to himself that he didn’t know if he would have even been able to do the Australian Trial Championship, as he didn’t train much this year.

“I guess all the stress was for nothing, because I rode fairly well this weekend,” expressed Middleton, who rates his sixth championship as his best, purely because it has been the hardest to win.

“I came into this weekend with a bit of self-doubt, however, once I got halfway through the first lap on Saturday I understood that I was riding quite well. To be able to win this year’s championship is a great feeling, but most of all it’s a massive relief,” added Middleton. 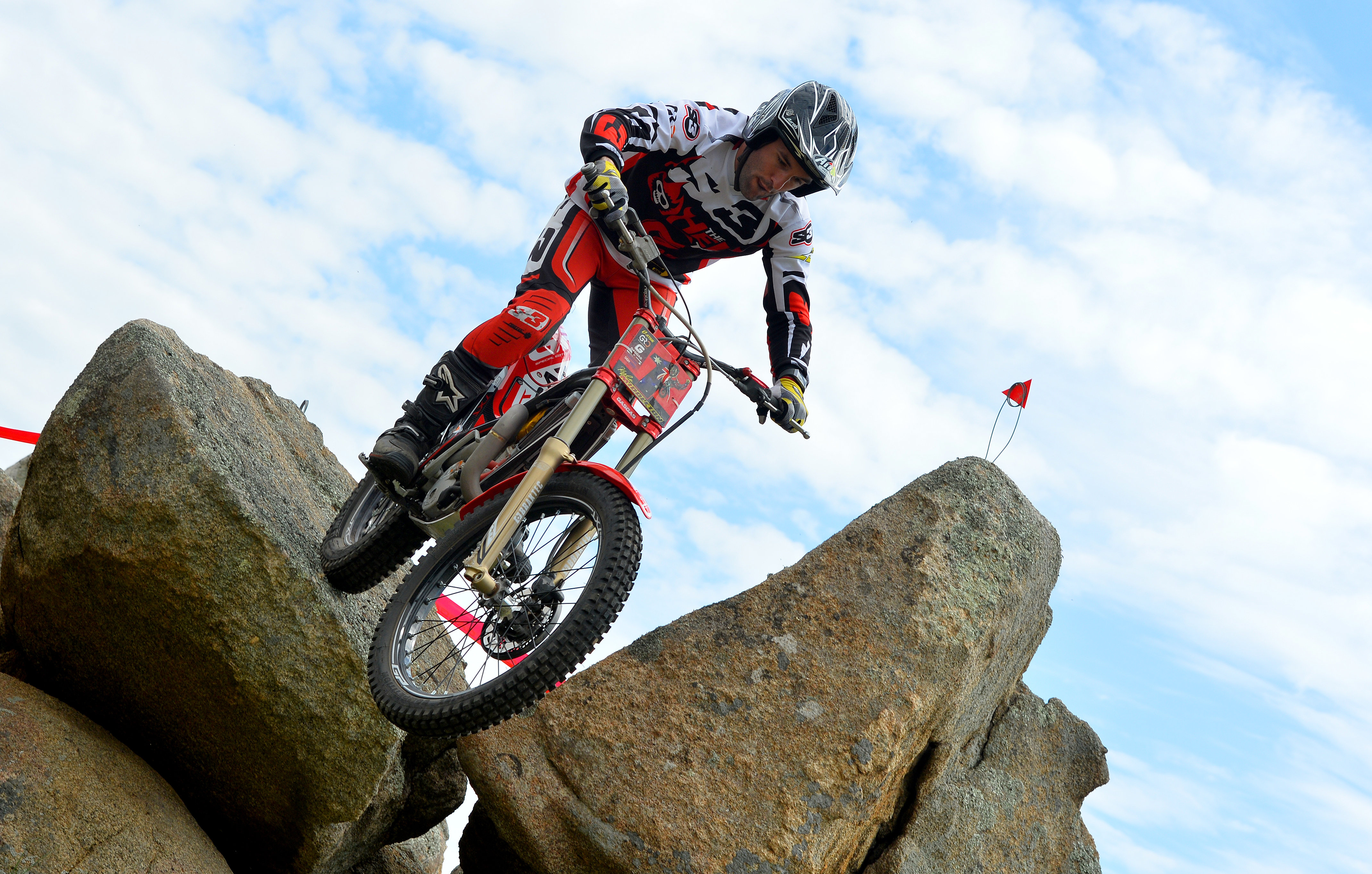 Middleton has declared that he will be back in 2019 to try and defend his championship, and hopefully make it a seventh straight title.

“As next year’s championship will be held in Tasmania, for sure Chris [Bayles] will be a tough person to beat, we will be riding in his ‘own back yard’. Hopefully in the off-season I’ll take a bit of time off and try and get my body right. If we do that, we should be more than fine,” concluded Middleton.

66-points off Middleton in second place was young gun, Connor Hogan, who continues to impress and has proven that he is a future star of the sport.
It was a bit of an up-and-down weekend for the 18-year-old, who hails from Bangor, in South Australia.

Hogan enjoyed some good laps and some laps which weren’t quite good. However, all in all he was pretty happy with how the weekend went.

“I managed to pull it together in the end, so I’m happy to walk away with second overall,” said Hogan, who scored 57-points on Saturday and 48 on Sunday.

When asked what he thought about the sections, Hogan replied with; “I found the courses fairly difficult and testing. Some sections were very much like what I rode while in Europe, but most weren’t. They were what you expected to be like at a place like Sedgwick. The sections were a lot of fun to ride.”

Overall however, Hogan walked away from the Australian Trail Championship more than content, as he didn’t have much expectations. Hogan, who finished fifth overall in last year’s Solo Championship just wanted to improve from last year, which he certainly did.

The next challenge for Hogan is to try and win the championship, which he is not getting to ahead of himself, just yet.

“It would be nice to be able to battle for the championship next year. In saying that, Kyle is an amazing rider, so it will be hard to knock him off his perch anytime soon. To be able to beat Kyle and take the championship would be ideal. I’ll keep working and hopefully one day it might happen,” finished Hogan. 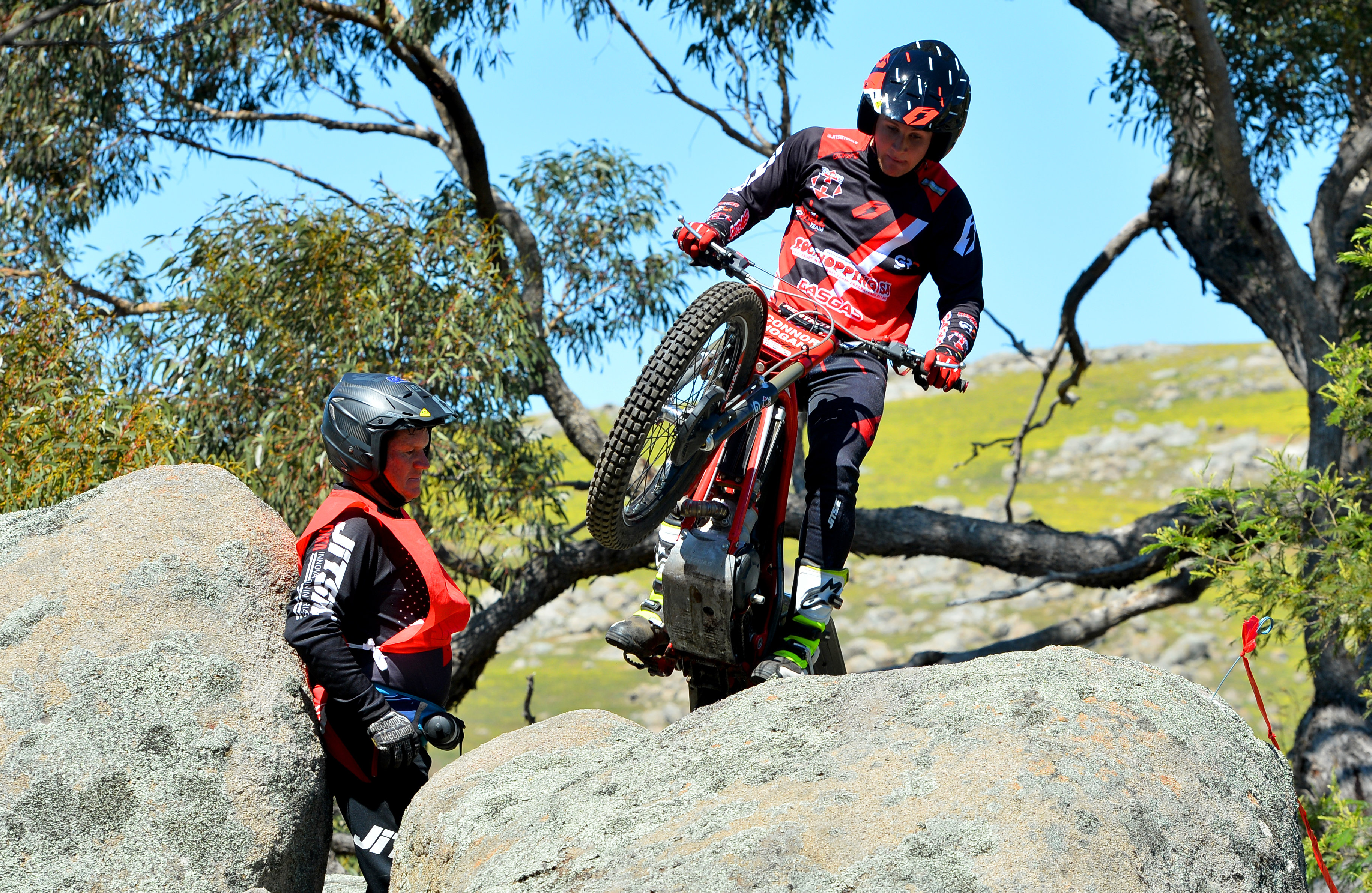 Just three points off Hogan was the 38-year-old, Colin Zarczynski.
Zarczynski certainly had a better day on Sunday, than what he had on Saturday.
On Saturday, Zarczynski suffered massive cramping’s in his hand, to the point where he couldn’t even open his own hand.

“I spent a lot time trying to fix my hand overnight,” explained Zarczynski.
“My hands did come a lot better than Saturday afternoon. Today, I looked after myself a lot better in terms of nutrition wise. In saying that, that issue did throw an extra spanner into the works.”

Zarczynski openly admitted that he felt as if he could have done a little bit better throughout both days.

“I know even the winners probably say the same thing as well. But, I’m just disappointed in myself a little bit. Maybe the preparation wasn’t as good as it could have been. Overall, I’m still walking away. All the issues over the weekend, they were just rider issues. There wasn’t anything else. It was all me,” finished Zarczynski. 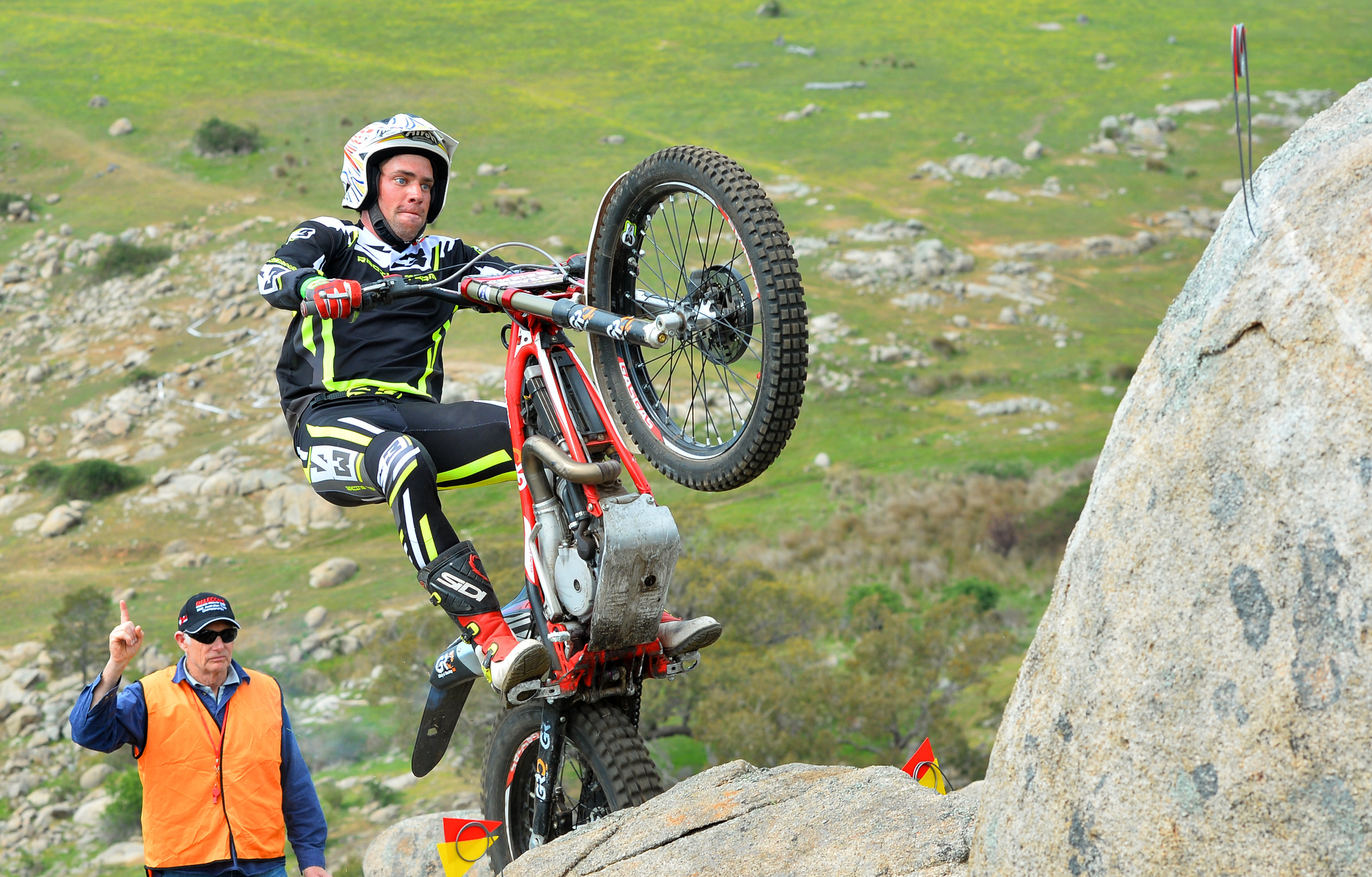 Tasmania’s Chris Bayles finished fourth overall with 131-points in the bank.
Bayles, who was more than happy with his riding over the course of the weekend, unfortunately had a couple of unlucky situations throughout both days. Bayles’ chain came off twice in the first section and on the same rock.

“It’s a bit disappointing, but I’m really happy with how I rode this weekend,” said Bayles, who felt quite good aboard his Gas Gas 300 machine.

Rounding out the top five was South Africanis Bruce Le Riche, who was nine points behind Bayles.

Kristie McKinnon kept her fine form going into the second day of racing by racking up a total of just 6-points for the day, which saw finishing with a grand total of 14-points and her ninth Australian Championship in the Women’s category.
McKinnon expressed that the sections on Sunday were a little bit tougher than what they were on Saturday, which suited her even more. 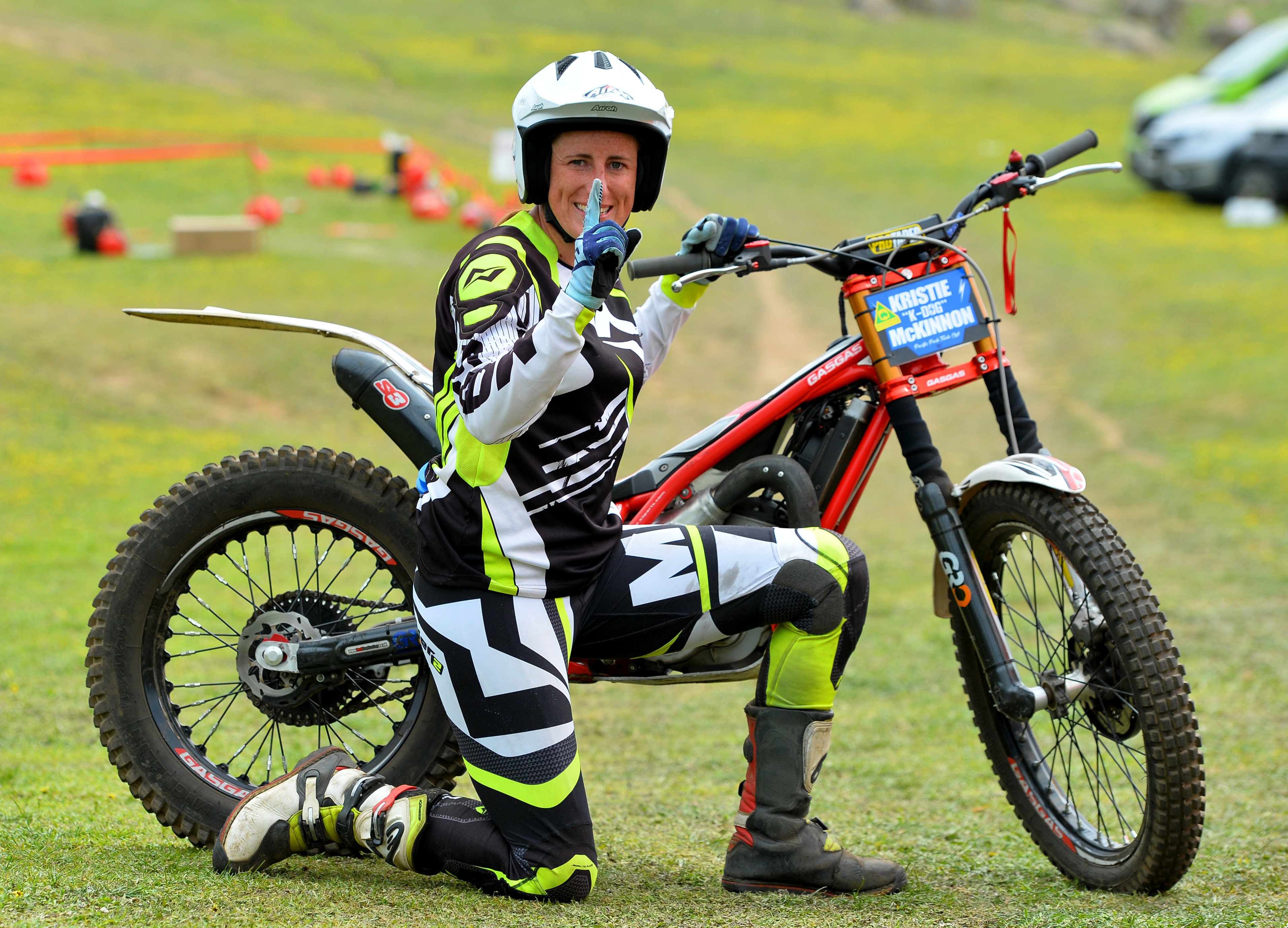 “I really enjoyed the sections out there today, as there were some nice steps to play on. It was simply a magic day,” said McKinnon.

McKinnon clearly came into the weekend as the favourite to win the championship, which she has lived up to expectations. But, was she expecting to finish the weekend with a ninth Australian championship to her name?

“Anything can happen in Trials. In saying that, I definitely feel as if I spend more time on the bike than anyone else. I definitely feel like I have put the work in, so I was feeling pretty confident just with the fact that I know that I had done the hard work and put the time in.”

McKinnon explained that’s it’s pretty special to win an Australian Championship. However, she still rates her second championship, which she won in 2009, as her favourite championship as she won it at Pacific Park in New South Wales which is her home ground.

“This championship is not any less special. I have definitely had a whole lot of fun at Sedgwick this weekend. On top of that we have had solid group of girls all riding at a high level, which is always good,” finish McKinnon.

Michelle Coleman finished second on 73-points, while Lillie Yiatrou finished third on a count back with Nicole Casey, as Yiatrou got 14 cleans to Casey’s 13.
Completing the top five respectfully was Jenna Lupo with 159-points.

Taking out the Junior 12 – under 16 Championship was Tom Woodhouse, which marks his first ever national championship.

Woodhouse has a remarkable day on Saturday, by racking up 4, 6 and 3 points throughout his three runs, which handed him just 13-points for the day, while on Sundayit he scored 9, 3 and 10 points which saw him scoring a total of 22, giving him 35-points in all.

Woodhouse explained that Sunday’s sections were definitely tougher than Saturday, as there was a lot of big obstacles and tight turns.

“Overall, we had a pretty good day,” said Woodhouse on Sunday.
“It was just unfortunate that made silly mistakes on my first and third lap and didn’t use the points wisely. Thankfully, my second lap was very good, which enabled me to keep my score low.”

Woodhouse labelled his first ever national championship as the “best feeling ever!”
“To win the championship is such a great feeling, as it’s what I have been working towards for the whole year. So to get it done is simply unreal,” added Woodhouse, who will depart Australia in two weeks’ time and head to New Zealand to take part in the FIM Oceania Challenge.

Finishing in second and third was Alex Cowan and Maverick Ford.
The 2019 Australian Trial Championship heads to Mt Joy in Tasmania, which is scheduled for 12-13 October.

For a full detailed on the overall championship, head to trials.com.au 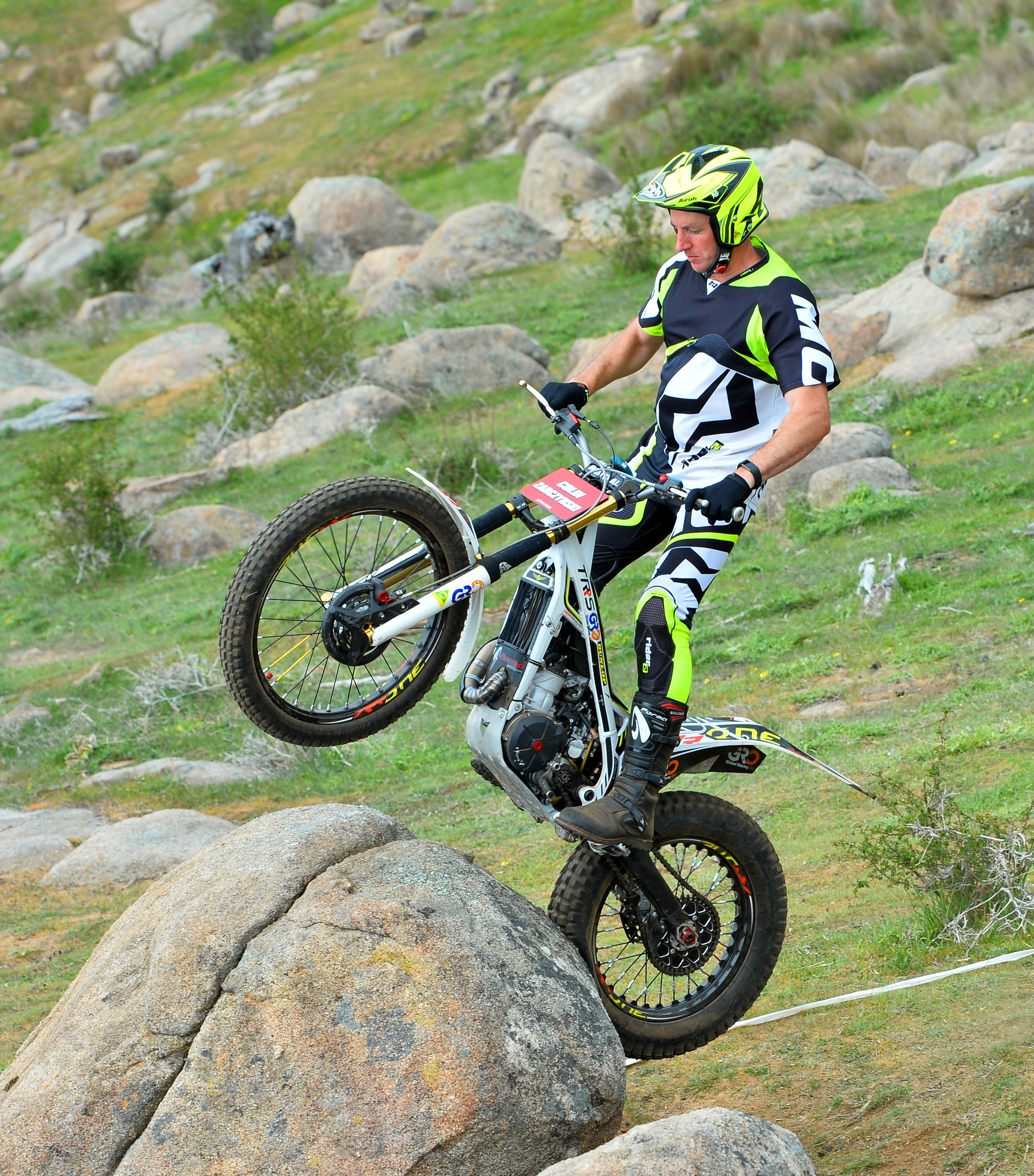