You are here: Home / News / Local motorcycle rarities coming out for the Shannons Insurance Broadford Bike Bonanza at Easter
Back 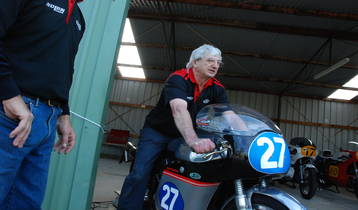 Local collector exhibits his ‘crown jewels’ for this event only.

Tucked away in the arid hills of Broadford is a treasure rarely seen. Unobtrusively looking like any number of local farms with a dam, sheds and wide verandaed house, what’s hidden out of sight would shock any motorcyclist with any interest in the history and the sport of road racing.

This Aladdin’s Cave of rare exotica is only opened using the magic word of its owner, Ron Angel. To be shown the contents is to be accepted into the rarefied sanctum of a trusted ‘friend of Ron’

Ron began racing successfully in the 1960s and started supporting other riders in the 1970s and with his profitable dealerships in Melbourne, began the path to his current Ron Angel Classic Racing team.

What is surprising about his current collection is that he took an extended break from motorcycling for –years while he built a comprehensive agricultural business. Ron only returned to collecting rare motorcycles about 15 years ago.

Now the impressive thing about all this background is that for three days every year at the Shannons Insurance Broadford Bike Bonanza (Easter – at the State Motorcycle Sports Complex, Strath Creek Rd.) you will be able to see 30 of these amazing machines. After that, they’ll be back in the cave, unseen.

That this man, publicity shy, would let such ‘unobtainium’ out of his sight shows his trust in the motorcycling fraternity and the respect we have for the engineering marvels that they are.

Come and see these rare beasts before they are locked away for the viewing of a few select eyes only.