You are here: Home / Road Race / Herfoss The Man at Hidden Valley Raceway​
Back

Troy Herfoss (Penrite Honda Racing, Honda CBR1000SP) has proven to be the man to beat once again, taking the overall victory in the YMI superbike class at Round 4 of the Yamaha Motor Finance Australian Superbike Championship presented by Motul Pirelli (ASBK) at Hidden Valley Raceway, Darwin. Herfoss took second in race one but took the win in race two after having a scintillating battle with Troy Bayliss (Desmosport Ducati, Ducati 1299 FE) in both races.

Herfoss pushed through the tough conditions and extended his championship lead; “That was epic, racing with Bayliss is something different, it was such a good battle, but we had similar pace all weekend just in different sectors of the track. A big congrats to my team and our sponsors I couldn’t have done this without them,” finished Herfoss.

Sadly, for Bayliss after breaking through for his first ASBK victory, race two was going to plan until lap number 16 when he ran wide of the YMI corner and dropped to third position. The problems continued for Bayliss after running wide as he slipped back to seventh position but his pole position and race one win, was enough to grab him second overall.

Bryan Staring (Kawasaki BCperformance, Kawasaki ZX-10R) enjoyed a consistent weekend taking out third overall with a third in race one and a second in race two, his best performance since taking out round one. 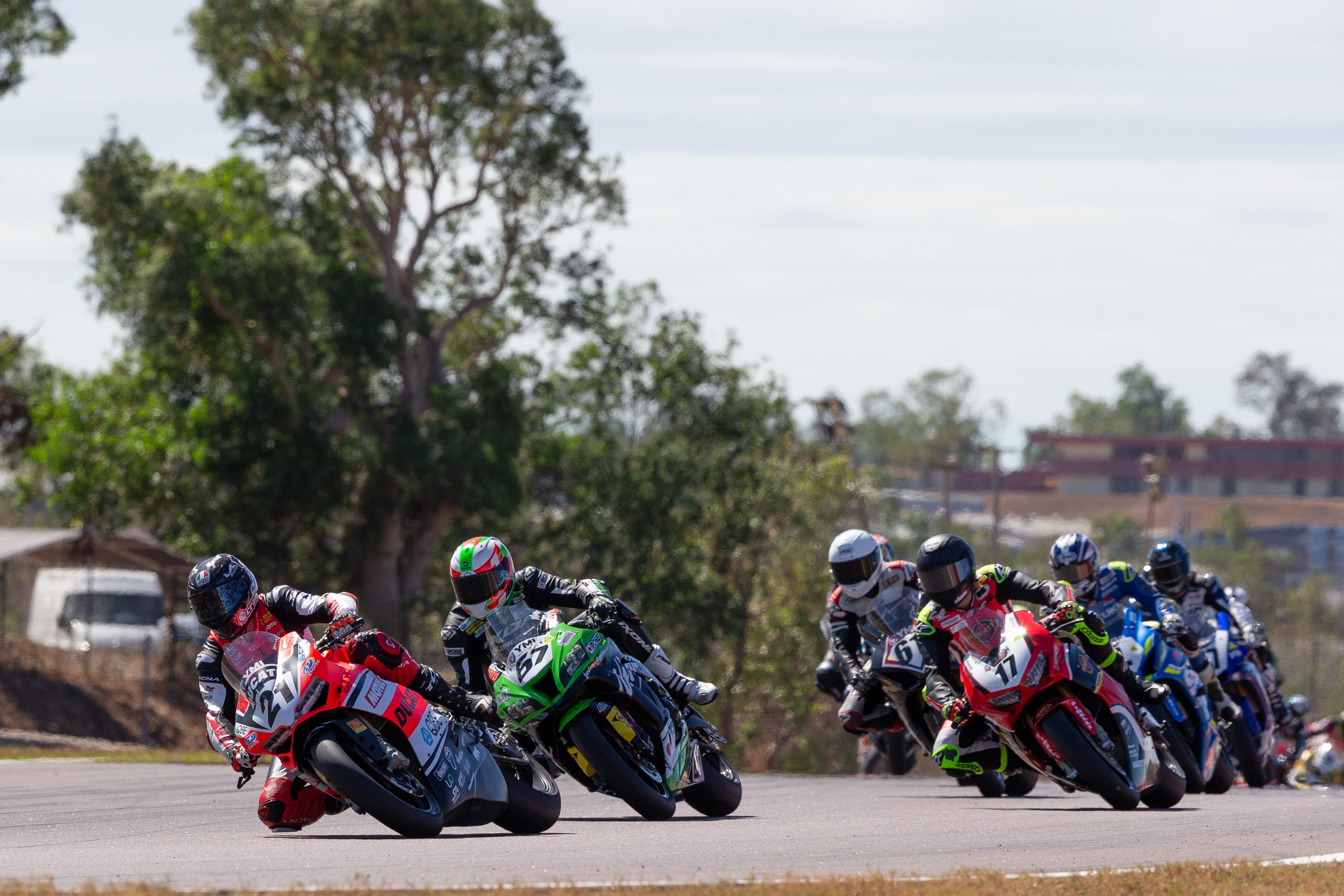 Race One
Bayliss (Desmosport Ducati, Ducati 1299 FE) takes out an ASBK YMI Superbike victory with a clinical display leading from start to finish at Hidden Valley Raceway and holding off a fast finishing Herfoss during an intense final lap in Darwin.

Bayliss got a great jump in the restart after a red flag and started to put in a good gap between the field and himself, his lead got out to 0.8s before Staring and Herfoss slowly started to make ground on Bayliss after lap 11.

Herfoss and Staring duked it out for second position, before Herfoss made the move down the 1.1km straight on lap 14 and set his sights on race leader Bayliss.

The final lap was a battle with Bayliss making his Ducati as wide as possible as Herfoss looked for any opportunity to make the pass, but it would be the Three Time World Superbike Champion who would cross the line first and claim his first ASBK
victory.

Bayliss was thrilled to take out his first ASBK victory; “I owe that performance to my team, it was a big call to bring an old fella on board. A massive shout out to all our sponsors and the team for putting me on a bike this good. I feel pretty good and that was a tough and physical race but ill be giving it my all in race two this afternoon,”
finished Bayliss.

Staring would settle for third after battling with Bayliss and Herfoss throughout the 16 laps, and Wayne Maxwell (Yamaha Racing Team, YZF-R1M)  would finish in a lonely fourth position as he was just under six seconds behind Staring.

Glenn Allerton (NextGen Motorsports, BMW S1000RR) put in a solid performance on his BMW and rounded out the top five finishing eight seconds off the pace of race winner Bayliss.

Leading the way for the privateers was Arthur Sissis (SA Demolition & Salvage, Suzuki GSX-R1000R) who finished in ninth to show great speed and that effort will give him great confidence for race two. 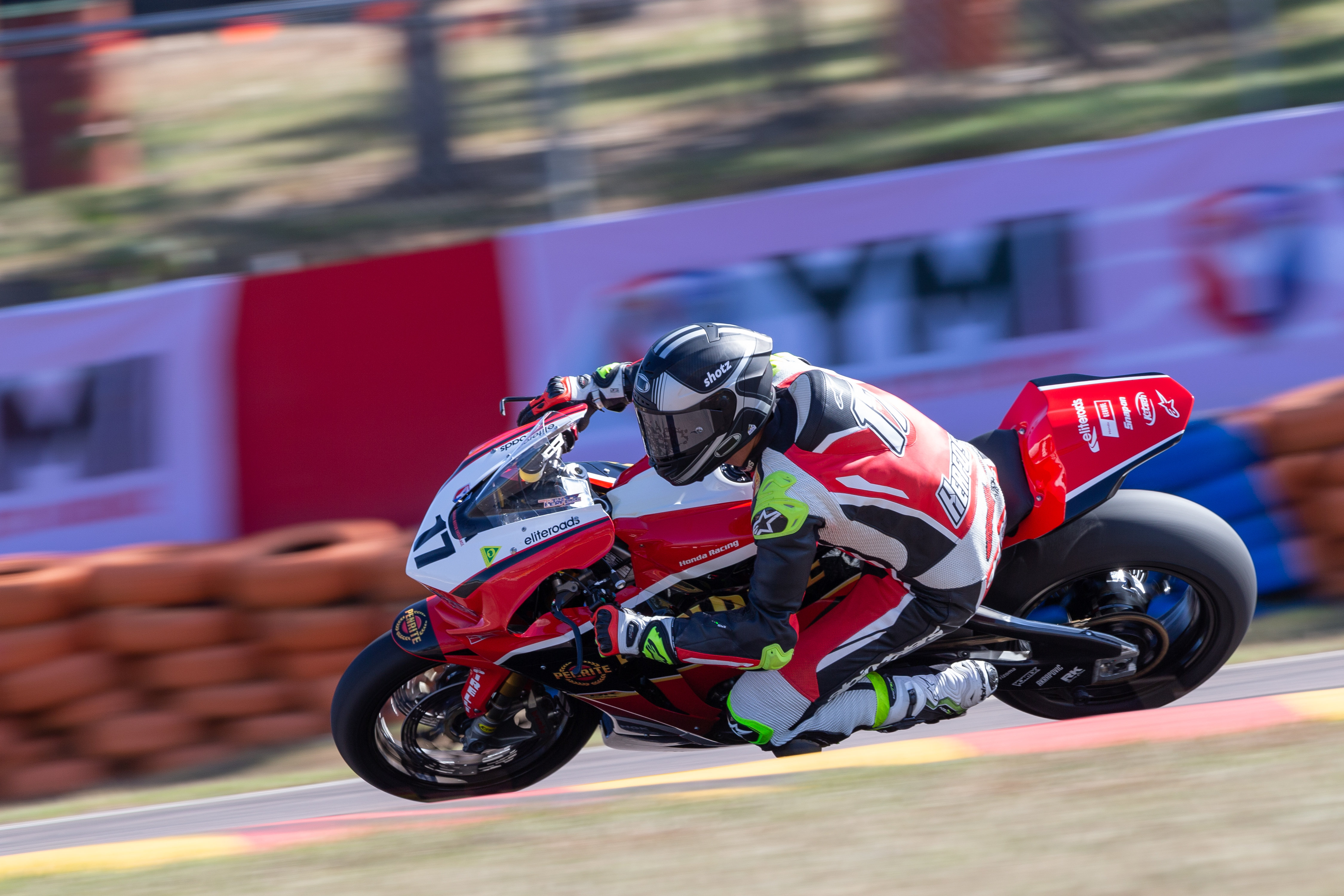 Race Two
Herfoss takes the win, but it was a battle for the ages for the first 16 laps between Herfoss and Bayliss, with the pair pulling away from the field and duking it out for the lead. Bayliss was leading the race and looking solid with great speed. A mistake on lap 16 at the YMI corner let Herfoss through and he didn’t look back.

With the mistake from Bayliss, Staring was able to get by as well and collect a well deserved second place finish.

Bayliss continued to have a tough time after his mishap and slipped down to seventh position, but Maxwell reaped the rewards and grabed the last spot on the podium and grabbed valuable championship points.

It was a drag to the line between Maxwell and his former teammate Allerton, but Allerton would have to settle for fourth.

The defending YMI Superbike Champion, Waters rounded out the top five in what was a tough weekend for the Suzuki rider.

Herfoss has now pushed his YMI Superbike Championship lead with 205.5 points, Maxwell maintains his spot in second with 176 points and Bayliss now moves into third position with 157 points.

The next time the YMI Superbike are back in action will be for Round 5 of ASBK at Morgan Park Raceway, QLD on 17-19 August.