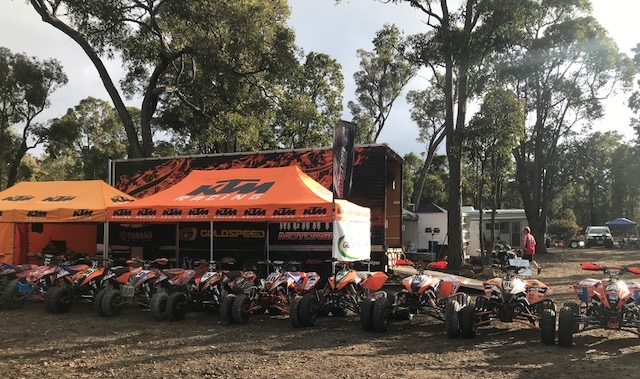 DAY One of the ATV Motocross Nationals kicked off at Collie Motorcycle Club’s Stockton Park Circuit earlier today under perfect weather conditions leaving the viewing aspect nearly as spectacular as the racing itself.

With many competitors and spectators camping together at the picturesque track since Thursday and after the previous days “Meet and Greet”, the atmosphere was unusually relaxed for a National Championship as practise and qualifying got underway.

An action packed day of racing proceeded from there with all classes racing two rounds on Day One. The racing was fast, the track prepped perfectly and after a few deep ruts formed the competitors gave the spectators the thrills, and a few minor spills, that they came to see.

Excitement replaced any residual nerves and tension once the riders headed into round one of racing which began with the crowd thrilling “Hole Shot Heroes” followed by the rising star classes of the 50cc Demo and the Jumbo Demo class and the 200 Air Cooled Only support class before the championship rounds began.

Young Isabelle Maton, rider #36 from Wanneroo Junior MCC, competed in the Air cooled class today and showed a level of strength and determination that left commentators, spectators and fellow competitors in awe after a racing incident saw her struggling to complete her race.

During Isabelle’s ordeal she never gave up even though she was very emotional and exhausted but the crowd and the commentators encouraged her all the way, later in the day Isabelle spoke about what had happened.

“In Race 2 today I managed to push my 250cc Raptor to its limits, coming around a corner in my first lap I managed to fight my way through a tangle of bikes. I was running 2nd behind the leader who I managed to overtake and push myself to 1st for the whole lap. I was then overtaken by another competitor putting me back to 2nd spot.”

“After holding onto 2nd I was then battling to hold onto this position with the rider right behind me. Unfortunately I found myself bottomed out in the deep, wet sand of Collie. I tried my hardest to push, pull, lift and bump my bike but it would not shift. Once I was found some extra muscles I was able to cross the finish line. I never gave up I was determined to the end”.

When asked what she liked so much about racing quads, Isabelle said “I love racing my quad because it’s exciting and I get to spend time with my friends and family that have the same interests”.

The 60cc to 90cc Competition Class kicked of the beginning of the ATV MX National Championships for 2018 and after each class completing two thrill seeking championship rounds this is how the end of day one panned out:

Day One-Results after Rounds 1 and 2:

In Race 2 of the Hybrid Class #37,Jae Dowsett, fought his way through from 5th place to 1st place in the first lap, an awesome effort in itself. But Jae wasn’t satisfied with 1st place, he kept powering on through a field of 15 riders, lapping them one by one right up to 5th place. Another lap and he would have been on his second round of lapping!

The Stockton Park circuit consists of sand, gravel and clay, is approximately 1.8km long and is regarded as a reasonably technical track and is extremely challenging. Although the track is being prepped again tonight, deep ruts have formed and the racing will be tougher and less predictable.

One of tomorrow’s undoubtable and ongoing battles will be between long-time rivals Luke Gaisford and Christopher Bosnakis.

Christopher ended today in the lead by only 3 points and said afterwards “I am off to a really good start. I am going to carry this momentum into tomorrow and hopefully get the championship back”

Luke Gaisford, the 2017 Australian ATV MX #1, commented this evening, “ Day one was good with 2nd place finishes. We have three motos tomorrow and I’m hoping to get some wins in tomorrow”

Luke who has travelled the world competing and won multiple state and national ATV Quad Championships and Sportsman of the Year Awards also said, “Motocross is a family activity and one of the most exciting features of an event like this is the opportunity to camp out at the track with family and friends”!

With strong contenders in all classes and many of the racers having previous nationals experience, tomorrow’s racing promises to be even more exciting, kicking off with the Pro Championship Class.

Now that Day One is out the way riders are primed and ready to do battle with Australia’s Best and to see who will be crowned the next Australian ATVMX champion in their respective classes.

Member for Collie-Preston and Minister for Sport and Recreation, Mick Murray, accepted an invitation to officially attend the 2018 ATV MX Nationals and will be present to award trophies at the trophy presentations at the conclusion of the event tomorrow evening.

For more information go to www.qrwa.com.au

Full Event Results are available on My Laps: https://speedhive.mylaps.com/Events/1601208

The circuit is located on Piavinnini Rd, about 7km east of Collie and adjacent to Stockton Lake.