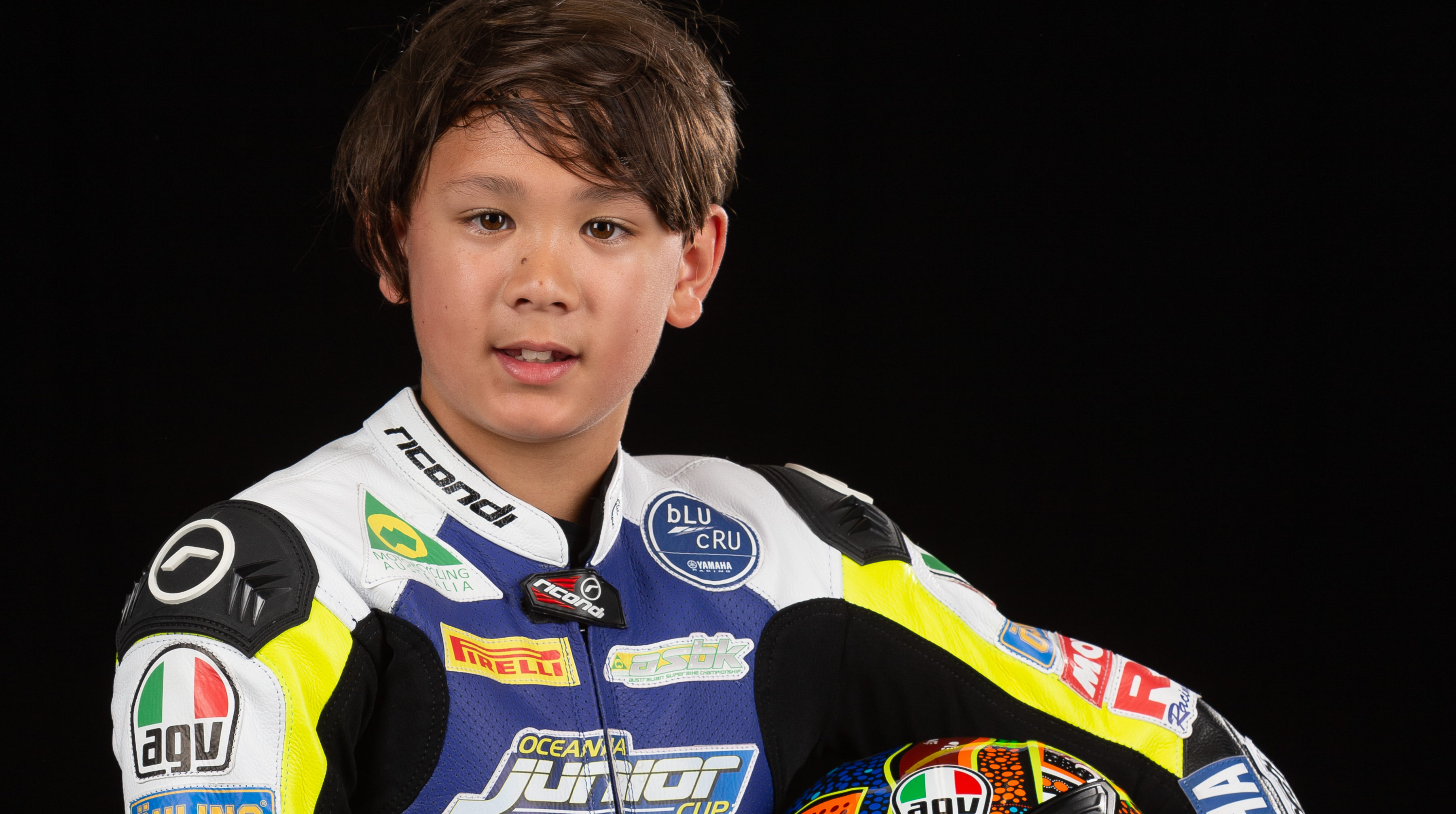 When you land at Morgan Park Raceway, Queensland for Round 3 of the bLU cRU Oceania Junior Cup on 5-7 July, be sure to keep an eye out for number 55 as the class of 2019 screams around the track. Flying under number 55 is Victorian Varis Fleming, who oozes an equally rambunctious and focussed attitude toward racing, home life and school, and is this week’s bLU cRU Oceania Junior Cup rider in profile.

Originating in Motocross (MX) and Flat Track, Fleming has taken to Road Race like a duck to water. As he continues to familiarise himself with the Yamaha YZF-R15, his confidence grows in leaps and bounds. Emulating his sporting idol, Valentino Rossi, Fleming is one to keep tabs on as he climbs up the leader board before the final round in Eastern Creek, New South Wales.

Tell us about where your love for motorcycle racing began and why?
When I was younger, I saw my dad doing bike racing and I wanted to get involved in the sport. So that’s really how it all began. I think I love this sport so much because I’ve grown up around it and it’s a part of me!

Tell us about the first time you hopped on a motorcycle.
The first memory I have was when I was at a MX track – I was five – and riding a Honda Peewee 50. I was a bit nervous, because it was my first time, of course, and I got stuck because it was very muddy. Then, when I got unstuck, I was going up a rocky hill and my chain got stuck in the rocks. So I had to wait there until my dad came to help me get moving again.

I did MX twice in total before moving straight into Flat Track, which I did until I turned 10. Then I got my Road Race licence, which I’ve being doing ever since. Nowadays, I do both Flat Track and Road Race competitively, alongside the likes of my mate (and fellow Oceania Junior Cup competitor), Archie McDonald.

So I’m a bit busy with all my racing, and I just have to juggle training, racing and school work. But my school is very understanding about my commitments, which helps massively.

Thinking back, tell us about one of your favourite memories growing up when it comes to motorcycling?
My favourite memory was when I won the 2016 Australian Junior Dirt Track titles at Broadford! That day included a crash with one of my mates, where I accidentally took both of us out. During that I race I came last, and then the next race I won!

Another favourite memory is winning the 2018 Victorian Dirt Track titles in Albury! 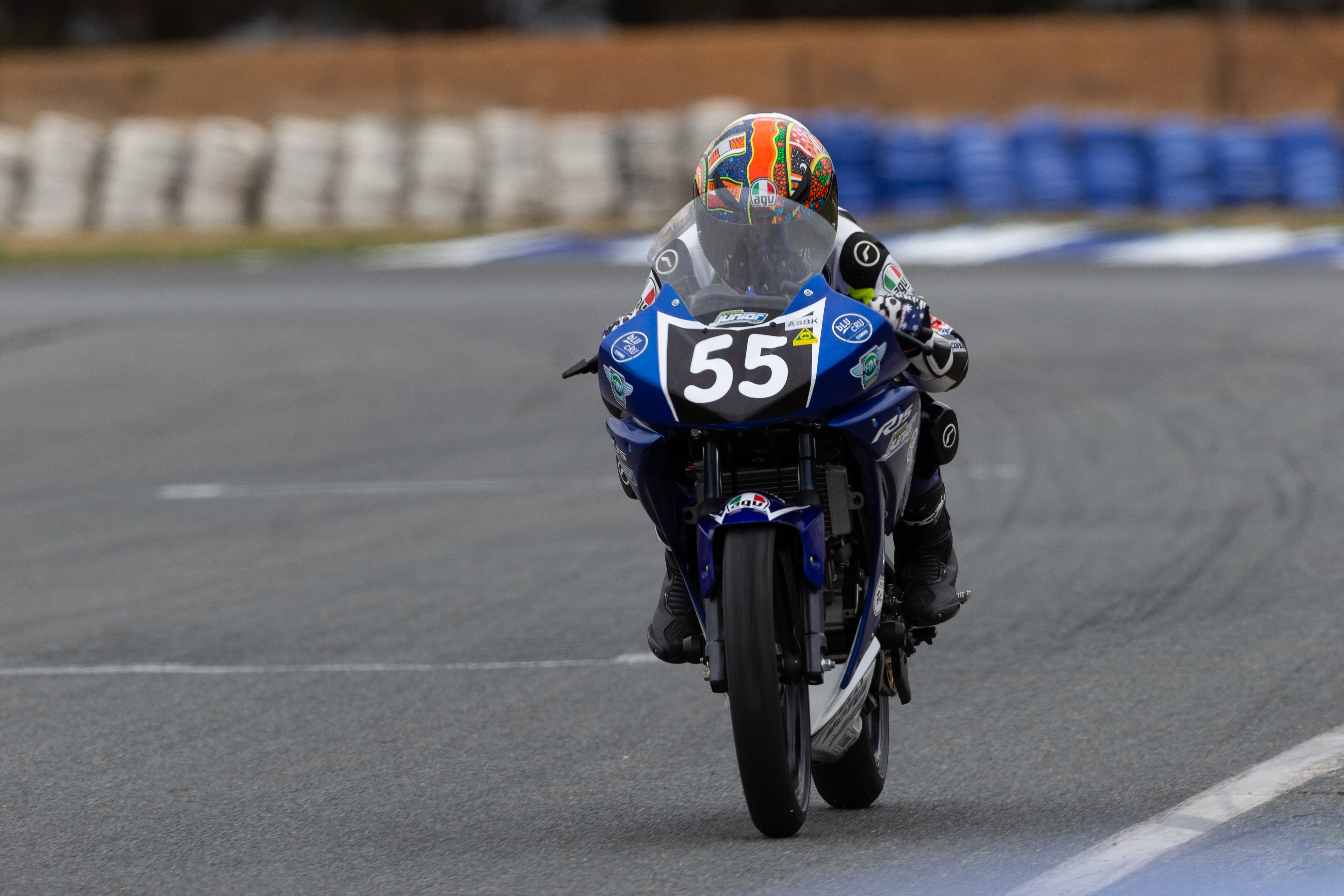 What career do you hope to end up in? For example, WSBK or MotoGP racer?
I want to get through the Oceania Junior Cup first and then get picked for things like the Red Bull MotoGP Rookies Cup. From there I want to get into the MotoGP as young as I can. I think it’s really important to start working toward MotoGP at the earliest age possible!

Tell us who your sporting idol is. How have they impacted you and your love for motorcycling?
My sporting idol is Valentino Rossi. I love his thinking, his crazy character and talent in racing!

I try and copy his style. I know I’m not there yet in being exactly like him but I’m working toward it! I think the main thing I try to copy as well is his thinking, especially during a race and getting his line right.

What have you learnt from the bLU cRU Oceania Junior Cup?
I’ve gained so many experiences! I love this opportunity and I’m getting my head around the game, which will hopefully see me up in the top end of the leader board toward the end of this season.

With Ohlins, I’ve been learning about suspension and what happens when you lower or lift the bike, which is really cool!

I’m also learning a lot from Damian Cudlin, especially because he has all that experience from being in the MotoGP.

Tell us about your bike, helmet, leathers, gloves and boots. How are you adjusting to the new bike? How do you find the products that have been chosen specially for you?
I love the bike! I’m still getting to it but without a doubt, I love it! I’m just getting my head around Road Racing in the past month, so I’m keen to see where I end up on the leader board by the end of the season. It’s been a major learning curve moving from Flat Track to Road Race, but I’m definitely getting the hang of it and gaining more and more confidence as I spend more time on the bike.

The same goes for everything we receive by being in the Oceania Junior Cup, like the leathers, gloves, boots and helmets! The Ricondi leathers were a bit tight to begin with, but they’re super comfortable now and I love wearing them! I needed an adjustment with my helmet but having AGV’s help we’ve now got a super comfortable fit which is awesome! 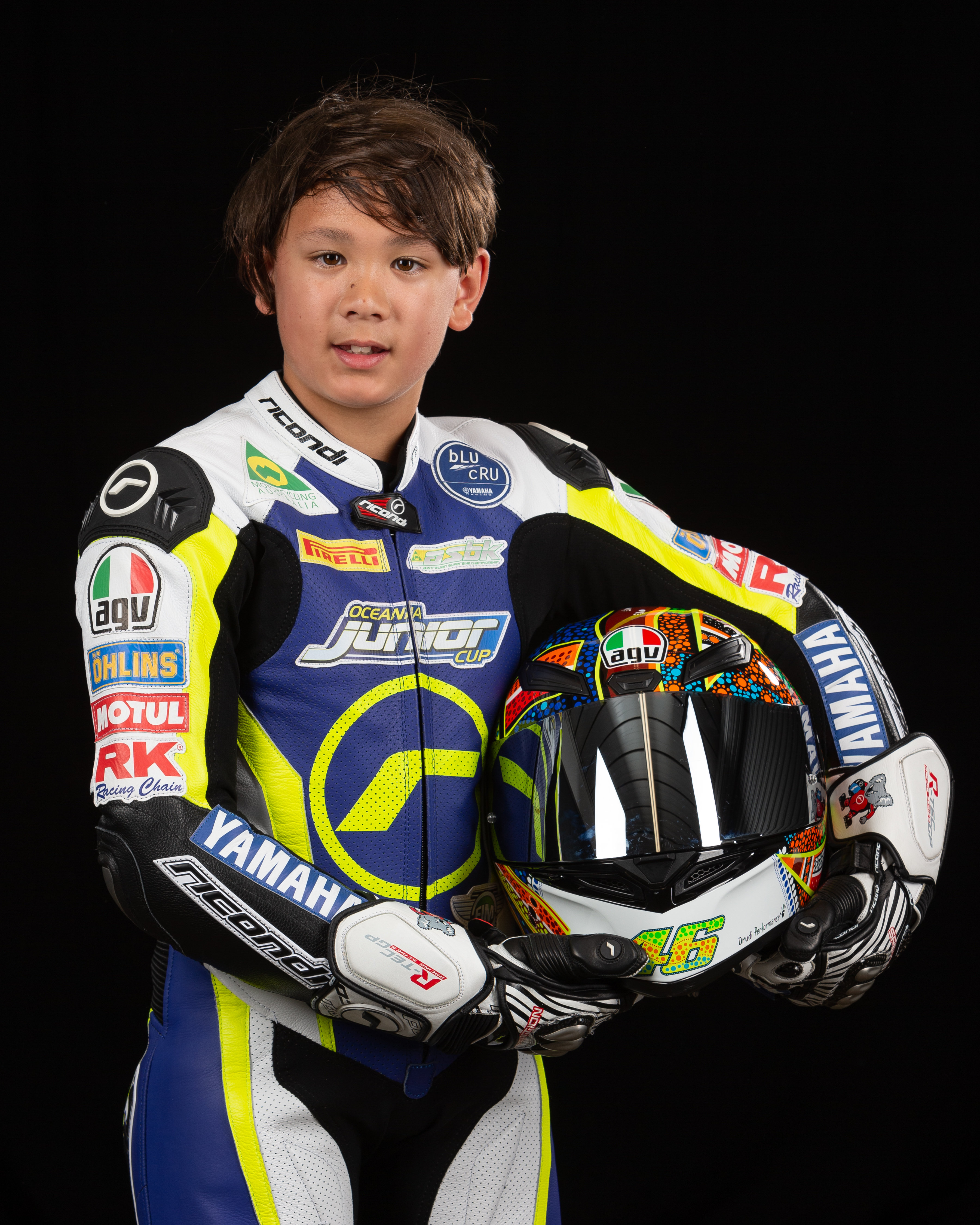