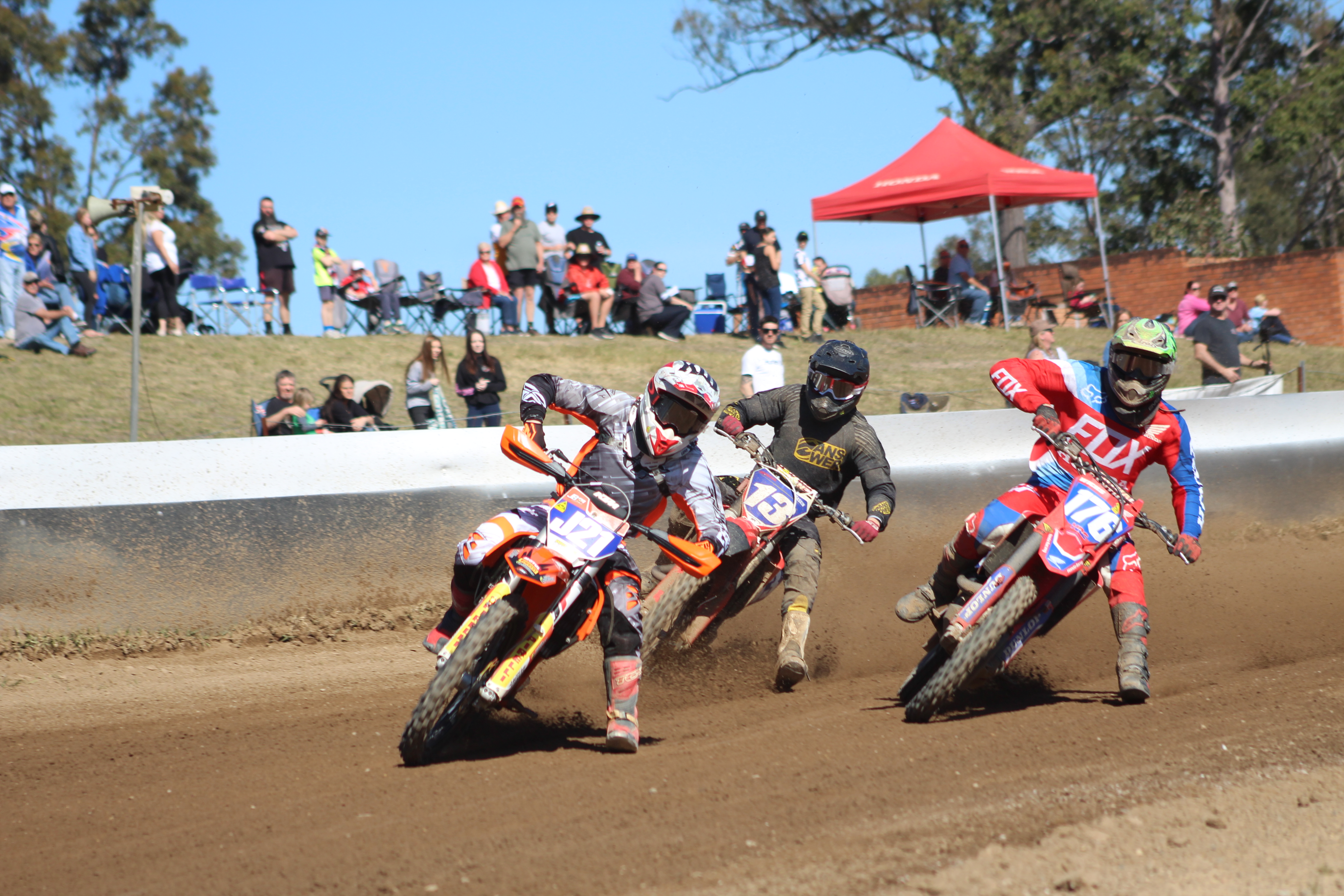 Six weeks and 1200 kilometres apart,  the outcome was the same with Jarred Brook scoring three class wins at the 2019 Australian Senior Dirt Track Championships staged by the Hunter Motorcycle Club at its Barleigh Ranch track last weekend (October 5 / 6).  That was a repeat of what the Gympie based North Brisbane club rider, Brook had achieved  previously at Mildura in this year’s Australian Senior Track Championship meeting.

While the stark results show that Brook triumphed in the MX Open, Pro 450 and Pro Open classes, it cannot show how hard Brook had to work against the classy line-up of assembled talent, and how good Brook was in achieving another hat-trick of title wins.

Of his 12 heat races Brook won 10, he had a flat tyre while leading another and suffered one defeat at the hands of Townsville rider Kayden Downing.

The three finals produced some memorable racing with positions constantly changing as Brook was forced to come from behind more than once.
At the end, only three other riders joined Brook on the presentation rostrums.

Another Townsville rider Damien Koppe split Brook and Downing in the MX Open, before Downing and Cowra rider Daniel Wicks chased Brook home in the other finals.

It was Brook’s first win in the Pro 450 title so he now gets him name inscribed on the Duke of Edinburgh Trophy for that success. 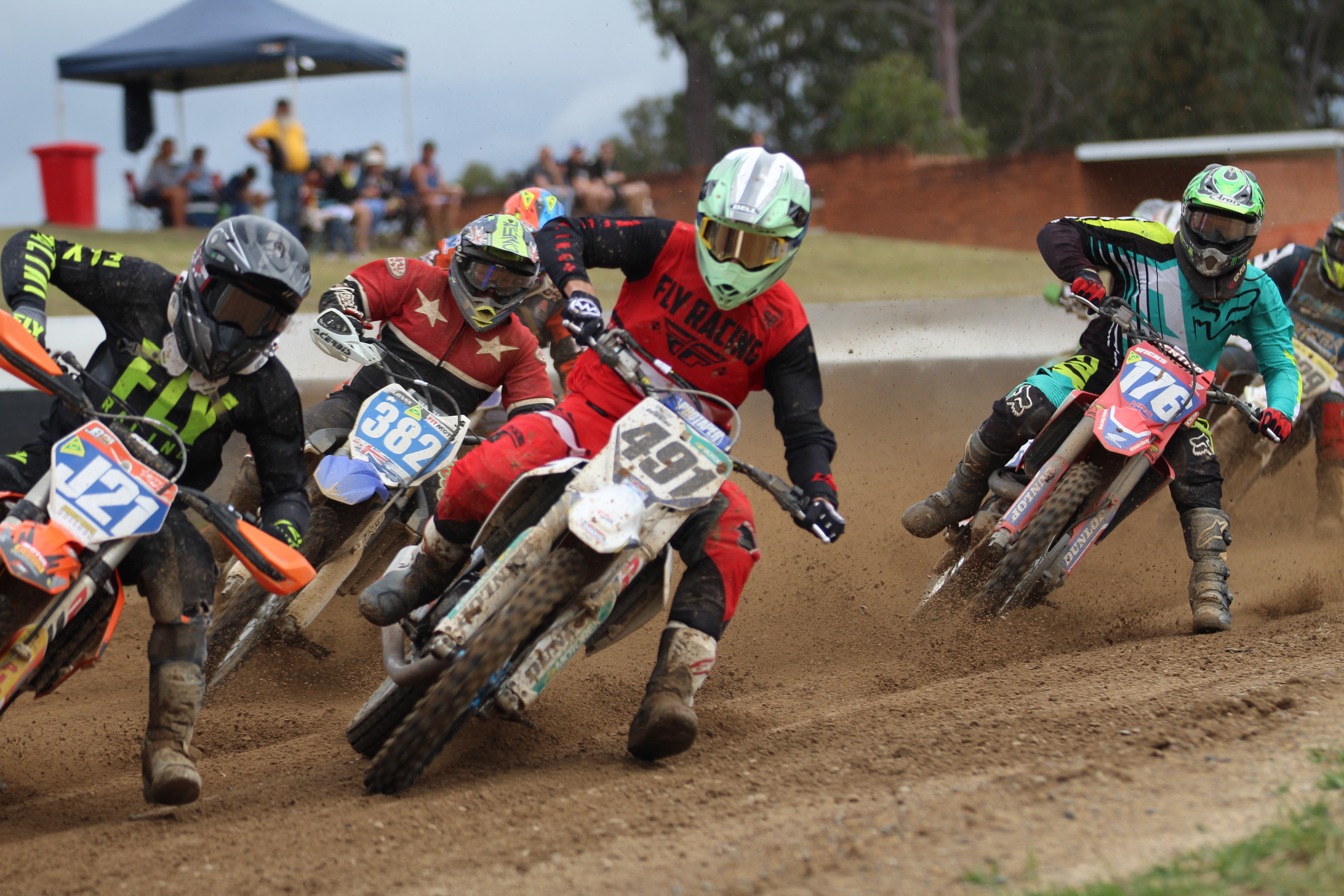 Downing was left with the most to lament as he spent more time leading Brook than any other rider, but could not beat him home in the finals.

With such a quality line-up of riders there were certainly no ‘losers’, but a championship meeting always give riders a chance to reflect to see where they are at and what they need to do to step up.

As some riders had a busy schedule of races which culminated in rapid-fire racing on Sunday afternoon fitness did play a part with a few seeming to fade during the six-lap finals.

The most disappointed rider must have been Lake Macquarie rider Michael Kirkness who won three classes in the 2018 title meeting at Gunnedah.

This year he recorded a fifth placing, fell while leading the repechage in another and was excluded for jumping the start in the other final.

Kempsey rider James Chapman stood atop the rostrum for the Pro 250 class after beating Kurri Kurri duo Angus Hutchinson and Harrison Ryan, the latter having been unbeaten in the heats.

Harrison Ryan did have some consolation as he shaded clubmate Hutchinson to win the Under 19s title.

The crown in the Dirt Track Sidecars did not change hands in 2019 after Darren Fien was a cut above his rivals, this year with former champion rider Adam Liebke as his passenger with their name also being inscribed on the Duke of Edinburgh Trophy .  Veteran combos David Grainger / Trevor Gaze from Maryborough and Darryl Woodhead / Sean Fuller from Gunnedah filled the minor placings, in both cases many years after the riders had first won the championship. 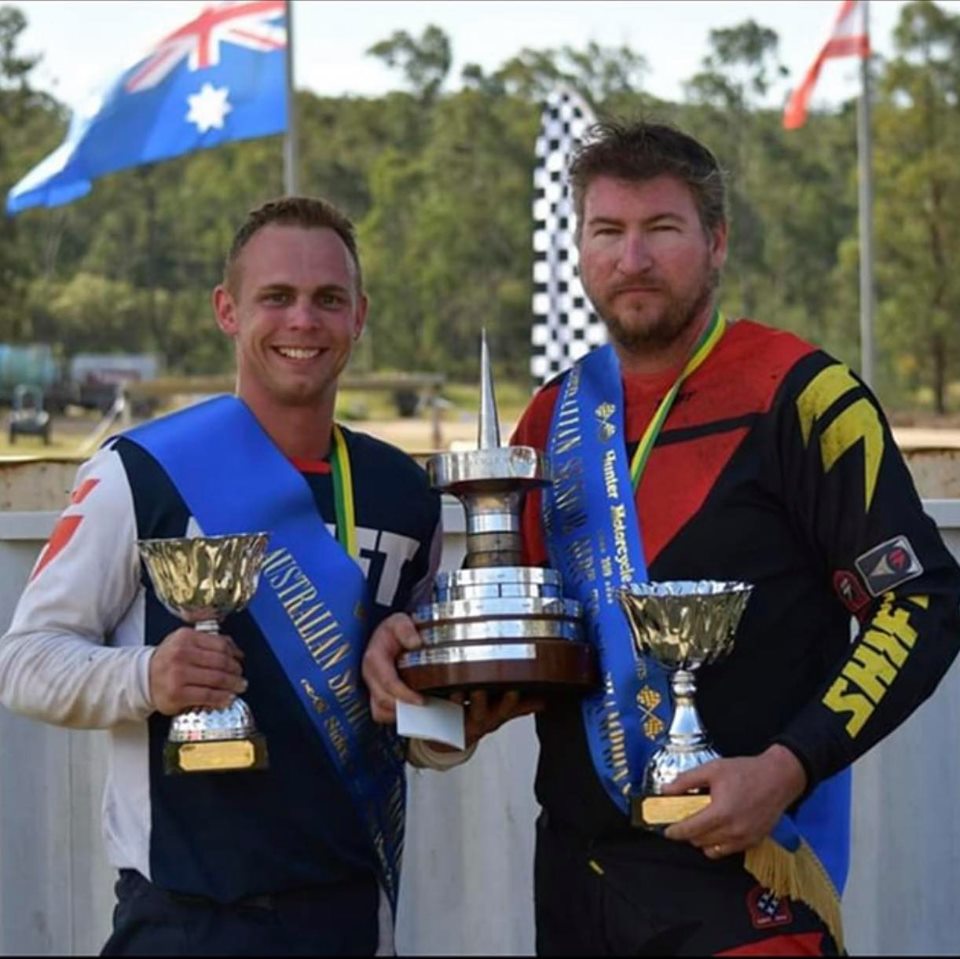 In support classes Jason Griffin topped the Over 35s while junior winners were Victorian Max Berry in his last junior meeting, Cameron Dunker and Lachlan Russell.

After a delayed start due to rain on Saturday morning the meeting produced high quality action with thrilling climaxes in all classes.