You are here: Home / Juniors / Australian Junior Speedway Championship Wrap Up
Back 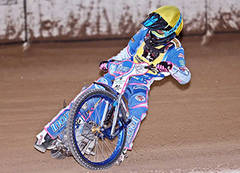 Keynan Rew has had a weekend to remember claiming both the Under-16 125cc and 250cc titles at the Australian Junior Speedway Championship in Mildura.

Rew was the fastest rider all night at Olympic Park speedway, only dropping one point in both the 125cc class and the 250cc classes.

Rew was thrilled with his results; “ It was good winning back to back titles on the 125cc, but to win the 250cc was great after a mechanical mishap made me miss practice, but we sorted it out and it all came together in the end,” The 125cc and 250cc Champion shared.

The 250cc class saw the winner of the B-Final Jacob Hook, step it up in the A-Final to finish second behind Rew, with Liam May in third place and Brock Tregea finishing in fourth.

Connor Bailey got the better of Rew in the 125cc heats but couldn’t replicate it in the A-final, finishing second. Cordell Rogerson rode well to finish in third, whilst James Pearson rounded out the final in fourth.

New South Wales won the battle of the states, with the team of Maurice Brown and James Pearson combining for 24 points to finish two points clear of Queensland pair Cordell Rogerson and Flynn Nicol. Victorian pair Connor Bailey and Patrick Hamilton rounded out the podium in third position.

Race Referee, Brendan Gledhill was thrilled with the team racing; “It was great to see the Juniors riding in their teams and looking out for each other, a highlight was the blocking from Bailey to help his team-mate Hamilton get the win,” he added.