You are here: Home / News / Aussie Toby Price in Third as Dakar Nears Grand Finale
Back 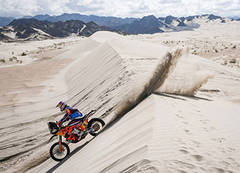 Toby Price’s chances to win the 2018 Dakar Rally have been dealt a blow as the 12th stage was cancelled overnight, with safety concerns being raised by the riders. Despite missing out on the opportunity to close the gap, Factory KTM rider Price still sits in a very competitive third outright. With only two more days remaining, the clock is ticking to secure another Dakar win.

As it stands, Price’s teammate Matthias Walkner leads the competition, amassing an advantage equating to over 30-minutes. With only two more days to ride, Austrian rider Walkner find himself in a commanding position to take the Dakar win. Residing in second position is Argentinian rider, Kevin Benavides.

Price in a sensational performance, took the victory for stage 11. It was a commanding display from the Australian, managing to devastate the competition and gain 11 minutes on Walkner.

The victory was a massive recovery after unfortunately losing a massive amount of time in stage 10, with Price experiencing navigation issues. Price managed to put the disappointment behind him and fight back for the win in the next stage.

Toby sharing after the stage 11 victory; “It’s good to get a stage win! Today we just needed to try and see if we could claw back a little bit of time, and I think we’ve done that, but it’s still going to be tough from back where we are! In the first week, I was quite conservative, but now I’ve attacked some more. To be still in the race after our horror Stage 10 and heading towards the finish line is a pretty big achievement for me. My goal is to stay on two wheels, not make anymore big mistakes and see what that gives us at the finish line!”

Fellow Aussie and Yamaha rider, Rodney Faggotter resides in 18th position, with Scott Britnell further back in 61st.
Foggotter saying; “An enjoyable day (stage 11), but yet another tough day of riding. My biggest disappointment so for is that it has taken more than a week to get in the groove, despite best efforts in training during the build up! The dunes of Peru owned me to a certain degree. Perhaps it’s all part of being a ‘Dakar rookie’. Now only two stages left. I’m in the groove and a little disappointed the stage was cancelled. Let’s see what’s left in this adventure…”

To keep track of our Australian riders compositing at the Dakar Rally head to https://www.dakar.com/en
Photo Courtesy of Dakar Rally