You are here: Home / News / #AmericasGP Race. Fantastic podium for Jack: P3 after a stunning race.
Back 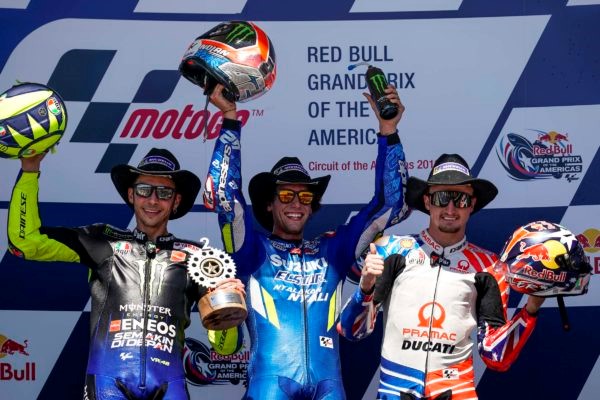 A weekend that can’t be forgotten. Jack Miller conquered a sensational podium finishing in third place after having been fighting for a long time for second position and Pecco Bagnaia was the protagonist of a very consistent race clinching ninth place and the first Top 10 in his MotoGP career.

Pramac Racing celebrates a spectacular Grand Prix of the Americas with the team protagonist on and off the circuit thanks to Automobili Lamborghini – title sponsor of the American round – which allowed riders and staff to drive fantastic Lamborghini Huracan and Urus.

With this result, Jack climbs to sixth place in the World Championship (29 points) while Bagnaia takes 7 points (9 in total, 14th place) that allow him to stay close to Quartararo (-8) for the “Rookies Championship”.

Despite the unfortunate double 0 in Qatar, Pramac Racing (38 points) is now only 3 points behind Lcr Honda, the first Independent Team in the MotoGP standings.

“I am very happy with this result. The feeling with the bike was very good all weekend. I got off to a good start and this allowed me to be in the front group right away. I thank the team because they have done a great job not only this weekend but since the beginning of the season”