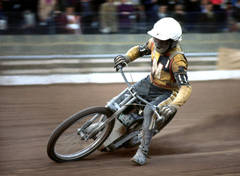 The 2018 Shannons Insurance Broadford Bike Bonanza (SIBBB) is going to be a very special event in so many ways this year, with this year marking the Tenth Anniversary of the Bike Bonanza. One of the main themes of this year`s Bonanza is a celebration of Neil Street (OAM 1931-2011) and his contribution to Speedway as a rider, manager and engine manufacturer.

Neil Street was a very accomplished Scramble, Grasstrack and Speedway rider. He is known the world over more so in speedway and with his Grandson 3 times World Speedway Champion, Jason Crump and Son in law Phil Crump the Street name has a habit of coming up in conversations regarding speedway anywhere in the world.

Neil revolutionised the equipment used in the sport through its adoption of his invention of the first 4-valve engine into speedway. This was known as the SR4 “Neil Street Conversion”

We are hoping that this coming SIBBB at Easter will see the largest amount of Neil Street SR4 motors and frames ever on display at one time in the world.

Guest riders coming to the Bonanza this year include 3 times World Speedway Champion Jason Crump making a return and also Aussie legend Phil Crump. Other world class riders coming such as Leigh Adams, Mick Poole and Cameron Woodward were all a part of the Neil Street Testimonial speedway meeting held at Broadford in 2002.

Other riders from that meeting yet to confirm their appearance this Easter are Craig Boyce, Jason Lyons and Matt Jones.

An added bonus this year is the return of Crewe rider Gary Flood plus Phil Herne who was in the Aussie team with Phil Crump that won the Speedway World Cup in 1976 at White City Stadium London.

Rod Hunter of RH8 Motorcycles has again stepped up to the plate and has supplied a Rolling Chassis plus an SR4 Neil Street conversion for Jason Crump to ride at the Bonanza.  Jason`s dad Phil is currently preparing this engine and the crowd will be amazed at how quick these original bikes go.

John Heavyside will be bringing all of his Vincent’s this year and Peter Tolley and Doug Cotterell will put on a spirited demonstration during the Speedway Spectacular held on the Saturday of the event between 4 and 6 pm. Jason Carter and his immaculate Romsey sidecars will also be a part of this year`s Bonanza.

There is a strong rumour that during the Speedway Spectacular this year an SR4 shootout involving Jason Crump, Phil Crump, Mick Poole and Jason Stewart is on the cards.

Also in the Speedway Spectacular this year we are fortunate to have riders such as Jack Morrison, Aiden Clare, Jay Herne and Mark Jones all on uprights.

Last but not least in true Romsey fashion a very special bike will arrive in the pit area covered from all eyes with a blanket awaiting its unveiling. This bike has been prepared specially for this event by Herbert Jackson Racing and is believed to be the only one of its kind left in the world.

In years gone by one off specials were wheeled into the Romsey pit area covered over with a blanket. The air of mystery this created was incredible as everyone could not wait to see what engine had been fitted to a longtracker this time.

If you have never been to a SIBBB then this is definitely the one to be at.