You are here: Home / News / Twelve Champions Crowned on Final Day of 2019 KTM AJMX
Back 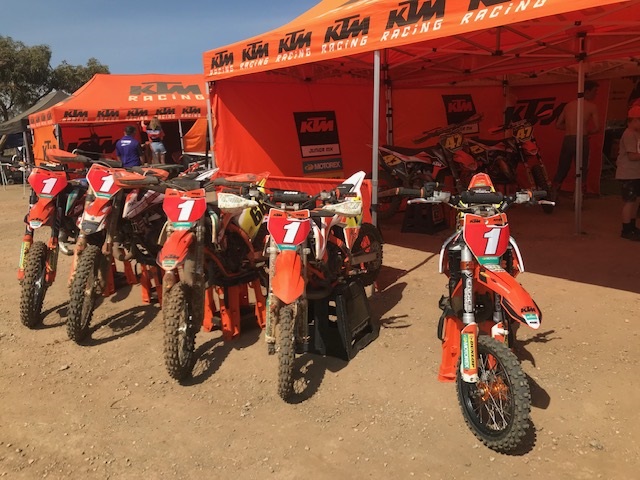 The Championship decider day of the KTM Australian Junior Motocross Championship (AJMX) being held at the Motocross Riders Association in South Australia saw plenty of thrills, battles and celebrations as 12 national titles were decided in what was an incredible day of racing.

The Motocross Riders Association club in Gillman has been blessed with exceptional weather conditions all week and the track has produced top notch racing. It has been a proud week for the sport, as the country’s elite junior motocross athletes were crowned!

The Motocross Riders Association, officials and volunteers are to be commended on the professionalism and efficiency in which the week-long event was conducted, and the daily track preparation and maintenance ensured the safety of all competitors.

With what was once again the Banana Bender Show, West charged to victory beating rival and fellow Queenslanders Deegan Mancinelle coming through with a close second and Jackson Camilleri rounding off the top three for the last final for this class.

The third and final race for the 65cc 7-U10 class was won by Queensland’s “Mr Consistency” Cooper Downing with an impressionable fast lap time of 2:14.508. Fellow Queenslander Peter Wolfe came second and local rider Cooper Ford (TAS) crossed the line with a strong third, to seal the championship win.

Queenslander, Charli Cannon has dominated this class and the final moto to take the Junior Lites – 13-U16 Girls Championship in fine style. The massive 210 points Cannon clocked up was more than enough to seal the deal and she won the final race by over 5 seconds. Cannon was followed by Victorian Madison Healey for second and Taylah McCutcheson rounded up the top three for their final race.

The third final and probably the most hotly contested class of the KTM AJMX saw New South Welshman Hixson McInnes prove to be the surprise package in the third final of the 85cc 2st/1500 4st 9-U12 class. Not only did Hixon have the fastest lap time of 1:56.285 but he also took the win over Queenslander Jet Alsop in second and West Australian Kayden Minear who took third place for the final and the overall win of the championship.

Charli Cannon from Queensland made it a clean sweep once again in the Mini Lites BW 12-U16 Girls final to grasp the title, completing the week with a dominant 18-second victory. Taylor Thomson from New South Wales pulled through for another consistent runner-up placing ahead of Queenslander Taylah McCutcheon.

New South Welshman Blake Fox has sealed the 125cc – 15yo championship, despite coming third in the final moto and winning one final. It was Queenslander Levi Rogers who took victory in the sixth final, followed by local champion Alex Larwood who had the fastest lap time of 1:45.589 and Blake Fox (NSW) followed him 8 seconds later to take third. 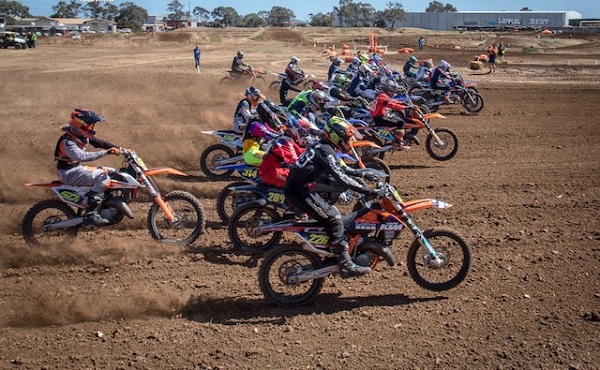 The championship battle for the Mini Lites BW – 12-U14 could not have been any closer, with the only 3 points between the top three! Ryder Kingsford was awarded the championship on countback, after finishing fourth in the final race.

It was New South Welshman Byron Dennis stormed home to take the chequered flag in the final race for this class, with a fastest lap time of 1:53.500, Queenslander Branden Plath crossed the line under 2 seconds later to take second and Cody Kilpatrick from New South Wales rounded up the top three.

New South Welshman, Benny Novak has once again sealed the Mini Lites BW – 14-U16 championship with his first-place finish in the final moto securing 201 points overall to retain the title for 2019.

Fellow state counterpart Hunter Collins secured runner up in the championship by coming second in the final moto with the fastest lap time of 1:51.684 and Queenslander Jake Kowal crossed the line in third.

West Australian Kayden Minear made it two championship wins at Gillman with victory in the 65cc – 10-U12 category. His first place and fastest lap time of 2:02.221 in the final moto was enough to guarantee the title.

New South Welshman Jack Deveson crossed the line closely behind for second and fellow state counterpart Ky Woods rounded up the top three in their final race of the day, placing him second on the championship podium.

West Australian Liam Atkinson sealed the title with a solid second-place finish in the final moto. Queenslander Ryan Alexanderson took a three second margin win over Atkinson and New South Welshman Hunter Collins came in third with the fastest lap time of 1:51.977 in their last race of the championship. 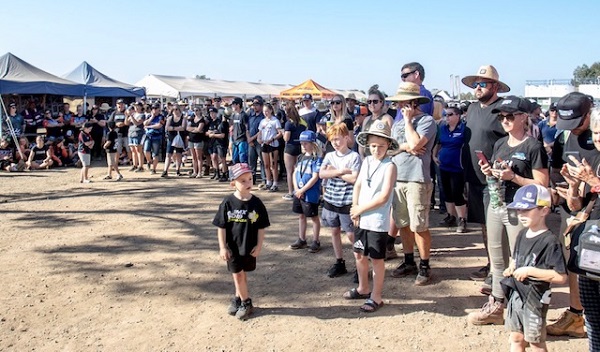 It was all the sandgroper’s way as Mason Brown (WA) took a sensational victory in the final moto of the 50cc class to earn himself a championship win, while Deegan Fort (WA) crossed the line 3 seconds later second making him runner up for the championship in his first national event. West Australian Brian Gyles had the fastest lap time of 2:24.483 which saw him third over the line for their last race of a very long week for this group of little aussie troopers!

Taking his second podium of the day, local hero Alex Larwood took the championship in style with the final chequered flag and the fastest lap time of 1:46.880 in the last moto of both the day and the 2019 KTM AJMX Championships.

New South Welshman, Blake Fox pulled through for second in the race making him runner up for the championship ahead of fellow state counterpart Cameron Torpy rounding of the top three for the final race of the 2019 KTM Australian Junior Motocross Championships!

Earlier this week each state chose a team of 8 riders from 4 different classes to compete for the Interstate Challenge Cup and each of those competitors was scored within their own class. At the end of the event, the state with the highest point scoring 6 team members had their final placings re-scored for an overall score. The state with the highest overall team score is the winner.

Queensland were the winners this year on 199 points, the runner up state for 2019 is New South Wales on 196 points, third place was Western Australia on 193 points, followed by Tasmania 189 points, Victoria 182, South Australia 174 and Northern Territory on 132 points.

KTM’s National Brand Manager, Tam Paul, was pleased with how professionally the KTM AJMX Championships were executed and commented at the end of the week-long event, “Another highly successful KTM junior nationals completed, congratulations to the MRA & the event officials on executing a great weeks racing at the highest standard, also the SA racing community for hosting us in your beautiful city, KTM Australia is proud to be associated with the Junior Motocross Nationals and we are already looking forward to Rockhampton Qld in 2020”.

Motocross Riders Association president Anthony Slade could not be happier with how the event turned out and thanked every person involved with this year’s championships.

“Firstly, I would like to say a huge thank you to all the competitors and their families who have travelled all over the country to take part in this years championship, it is amazing just how many talented riders we have in Australia.”

“To all the officials who made this event possible, a huge thanks for ensuring it was a smooth-running event that has had high praise.”

“This event would not have been possible without the hard work and dedication of both the club committee, members, our extended AJMX committee and all the volunteers who worked tirelessly throughout the week, in the hours before during and after each day of racing and of course all the amazing sponsors who made this event possible including the great people from KTM Australia and Motorcycling Australia.”

Motorcycling Australia would like to congratulate all the 2019 junior champions along with each rider who participated in this year’s championship.

With the 2019 KTM Australian Junior Championships now over, riders and families will look ahead to the 2020 edition of Australia’s biggest junior event, which heads to Rockhampton in Queensland from the 6th to the 11th of July.

More photos can also be found by Jack Foley Photos at J.F Photography  or at www.facebook/classicshots courtesy of Craig Wasley 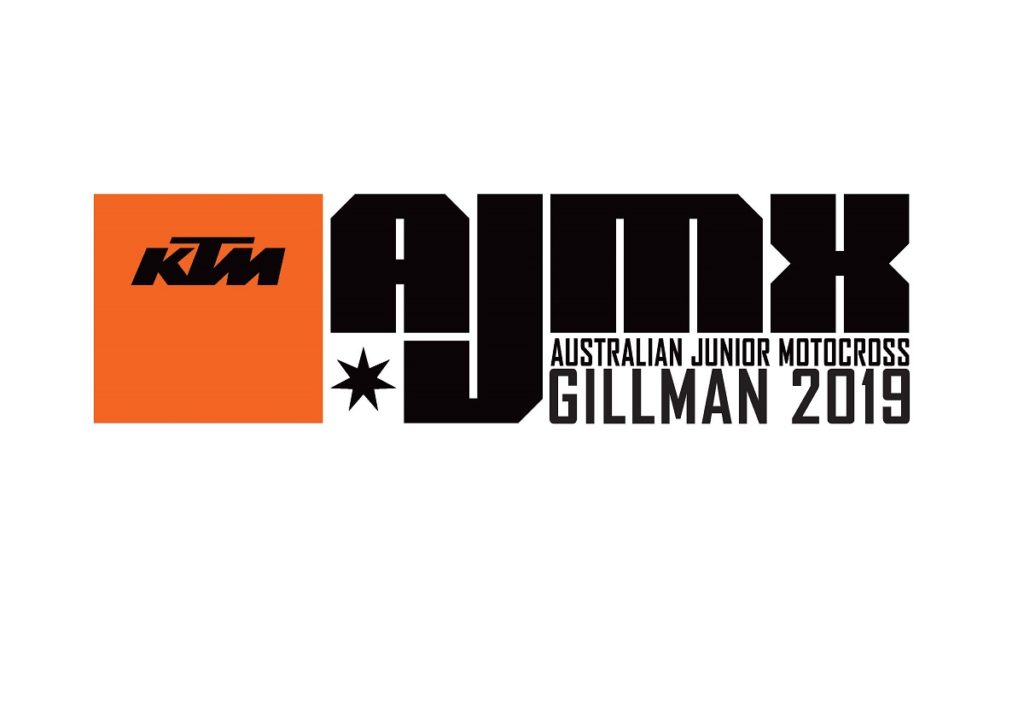