You are here: Home / News / Toparis and Simpson Lose Their Winning Streak To Liminton and Ford At The Bend
Back 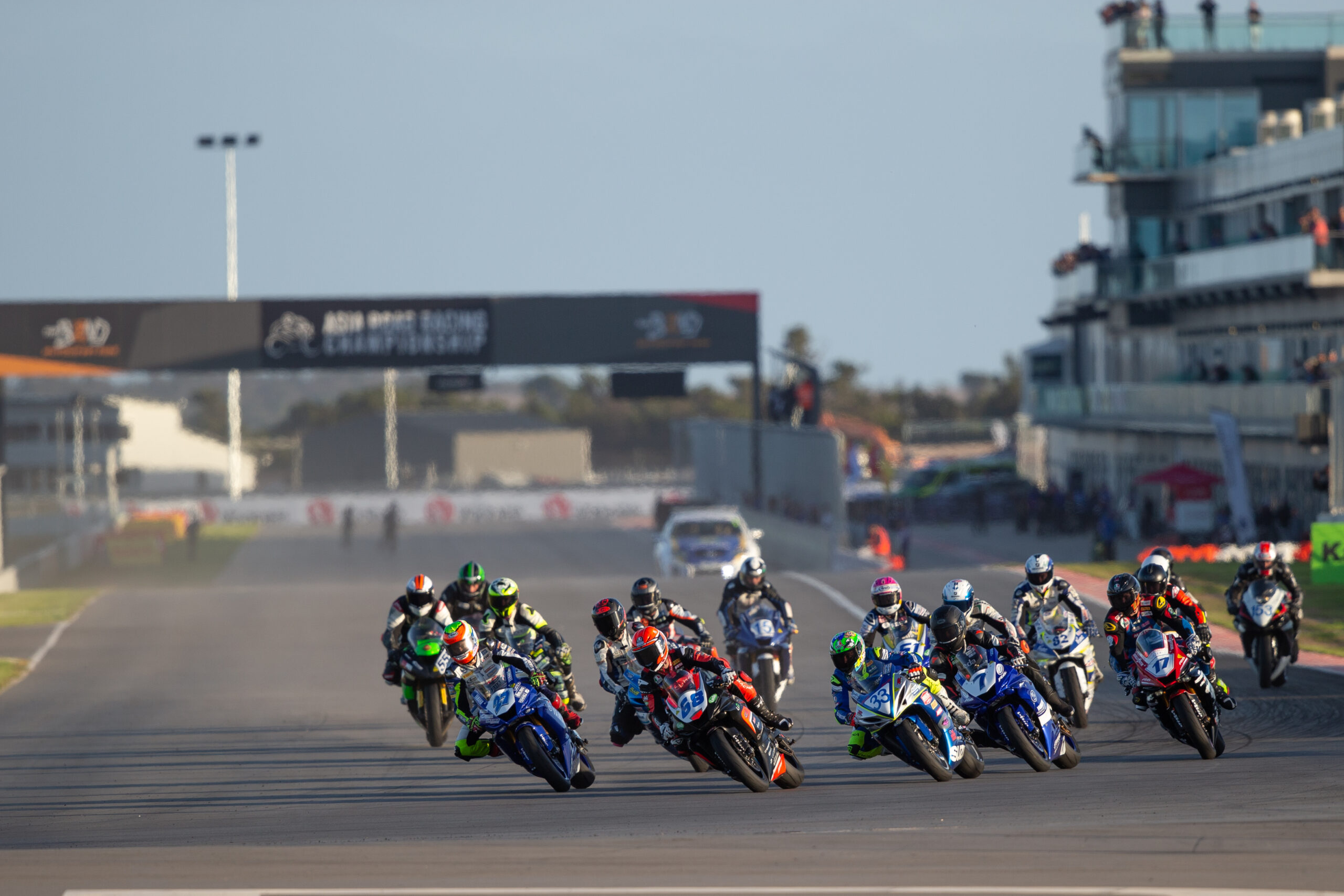 As the sun shone down on The Bend Motorsport Park, South Australia today, spectators and competitors alike were settling in for breathtaking competition in the Motul Pirelli Australian Superbike Championship’s (ASBK) Australian Supersport and YMI Supersport 300 classes. Running in conjunction with the International MotoFest and Round 2 of the Asia Road Racing Championship (ARRC), Round 3 of the 2019 ASBK season left no stone unturned as new faces appeared in the leading pack and undefeated titles were destroyed. 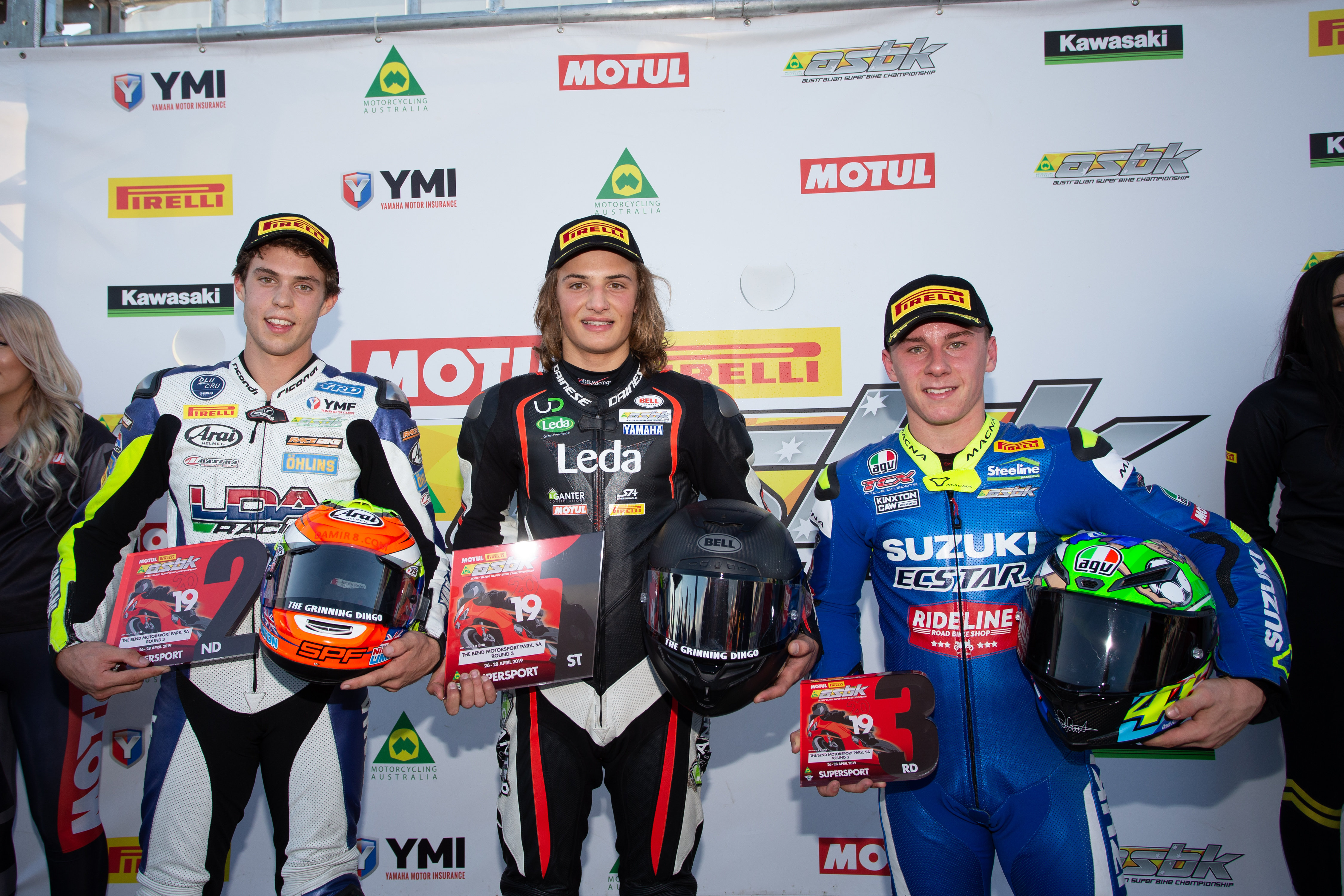 Australian Supersport
After tasting gold yesterday, Toparis surged ahead early into Race 2 of the Australian Supersport class. Fighting hard to deplete the distance between himself and Toparis, Nic Liminton became a demon behind the handlebars, screaming across The Bend Motorsport Park’s 18 turns. After eight laps though, Liminton finished in second behind Toparis, with just over a six second separation between them. Rounding out the podium in third was Reid Battye (Suzuki GSX-R).

Coming into Race 3, Liminton clearly had a fire in his belly that couldn’t be quenched. As the Australian Supersport class surged into the first corner, Liminton was quick to put the pressure on Toparis, with Battye close behind. Filling out the leading pack was Broc Pearson (City2Surf Locksmiths, YZF-R6), and Avalon Biddle (Cube Racing, YZF-R6) who has cemented her arrival to the ASBK paddock, proving that her speed and skill is a fantastic introduction to the class.

Up until the final lap, Toparis appeared to be a shoo-in for the win, continuing his undefeated reign. As the final straight neared though, the dark horse, Liminton, stole the show and set hearts racing as he scored his first win of the 2019 season! Toparis settled for second, with Battye clinching the final podium position for a consecutive race.

Breathless, like all his spectators, Liminton stated “I knew I could stay with him. We did another risk with the rear tyre and it worked perfectly!

“I couldn’t be happier! It’s a massive thanks to the team for getting me to this position!” 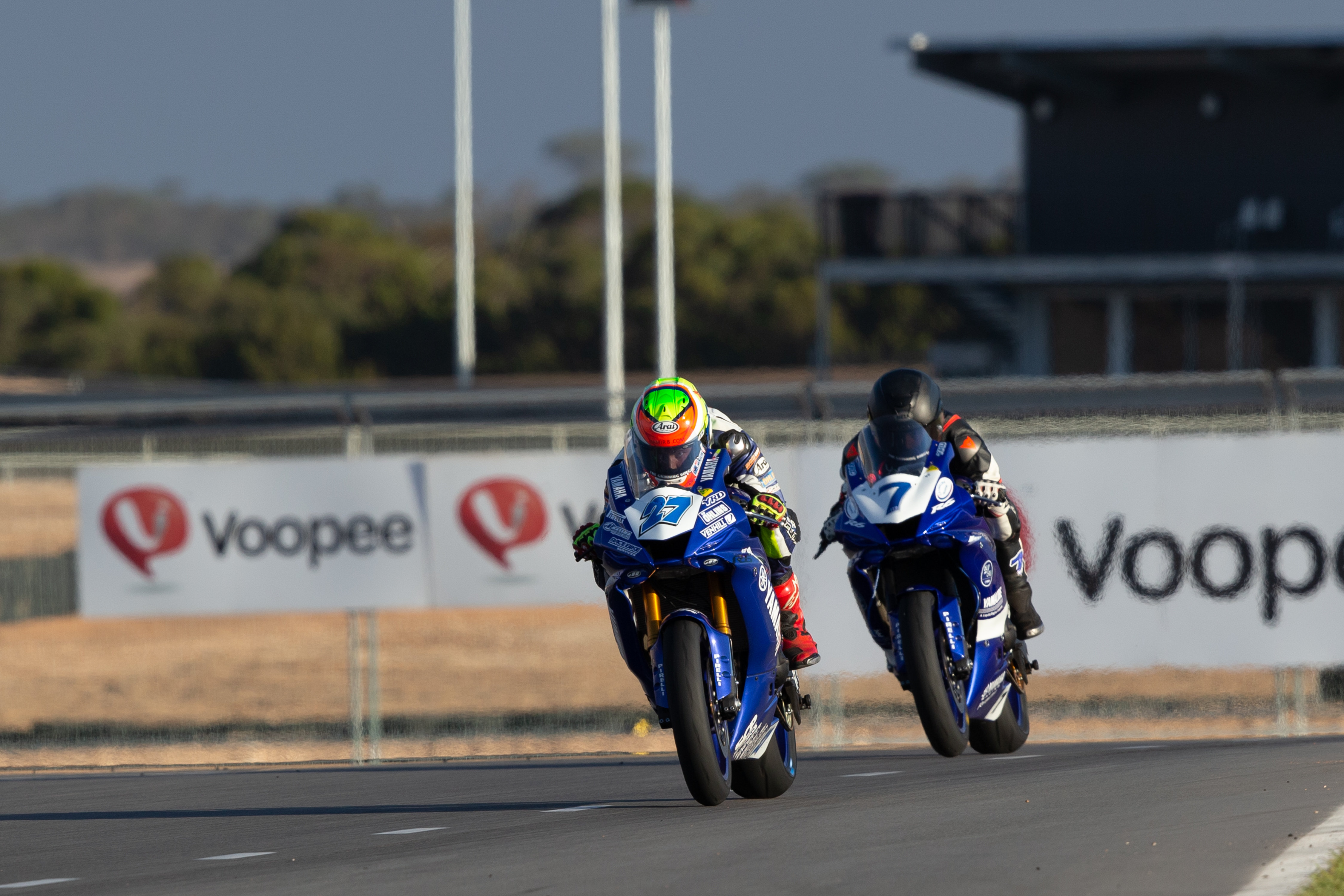 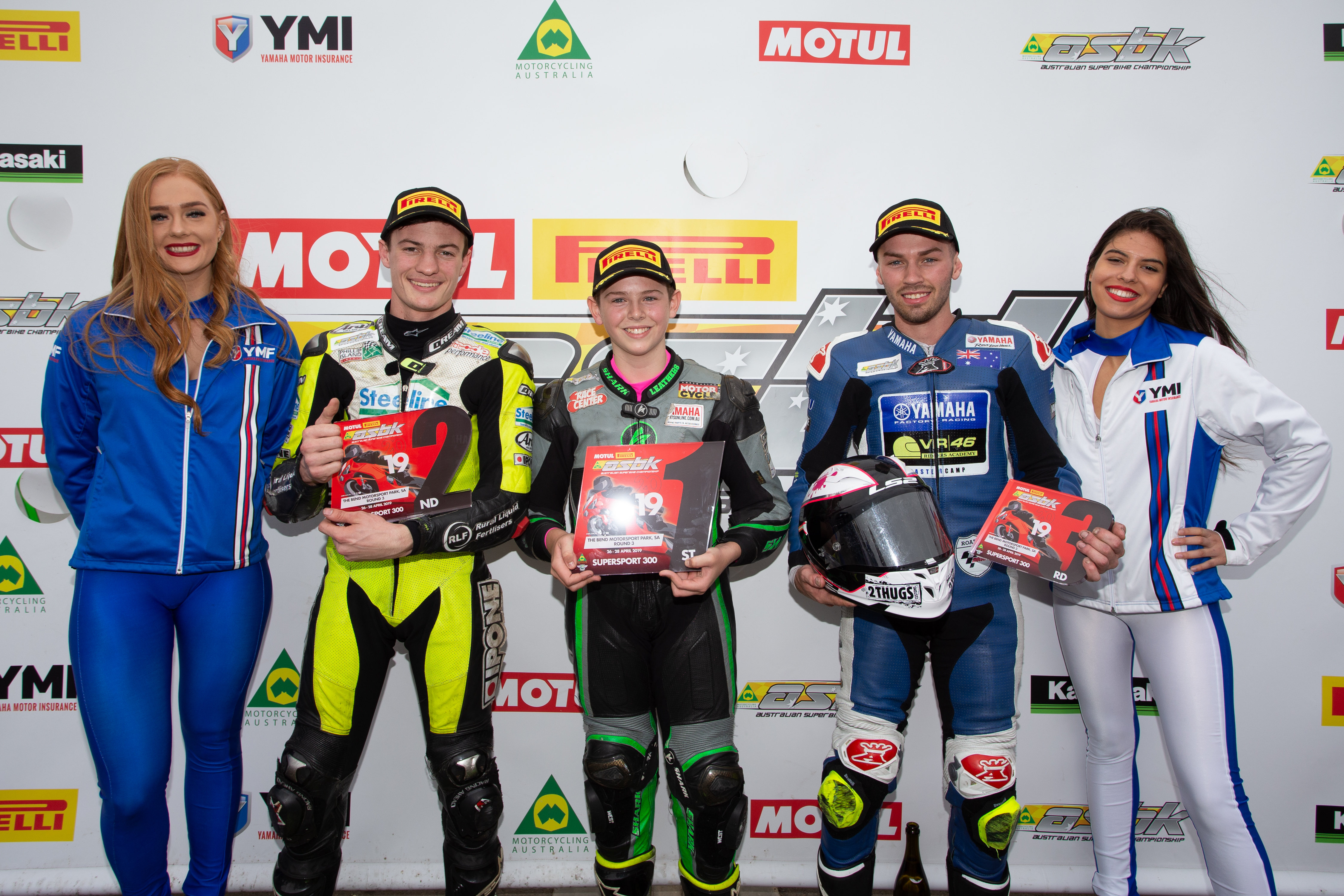 YMI Supersport 300
Following on from a highly successful Saturday, Simpson took up pole position for Race 2 of the YMI Supersport 300 class. Deemed untouchable and riding a top his unforgettable experiences at the Red Bull MotoGP Rookies Cup, Simpson took the lead right from the first straight, but he was quickly thrown into a tango as he weaved and bobbed with Seth Crump (KTM, KTM RC 390), Senna Aguis (Schuberth, Kawasaki EX 400) and Ford. After seven thrilling laps, Simpson reclaimed his lead, finishing first ahead of Ford and Agius and second and third. After Race 2,

As the siren called for Race 3, Simpson once again sat in prime position, locked and loaded to close off the final race of the weekend in first place. As the highly competitive pack dove into turn one, Locky Taylor (Yamaha Australia, Yamaha R3 321), Agius and Zac Levy (Puma RV’s, Yamaha R3 321) clashed together, bringing out the red flag. As the riders returned to the start line and tyres cooled, Simpson remained an iron first on his campaign to victory. Across the six laps, Simpson, Crump and Ford danced with one another, rivalling ballroom dancers as they used each others slipstreams to their advantage. In lap four, Simpson retired due to mechanical issues, leaving the race wide-open for anyone’s taking. As Crump proved once again that he is a demon behind the brakes, Yanni Shaw (WRP Bridgestone, Kawasaki EX 400) brought a gasp from The Bend’s spectators as he landed in second after originally commencing today in 12th. 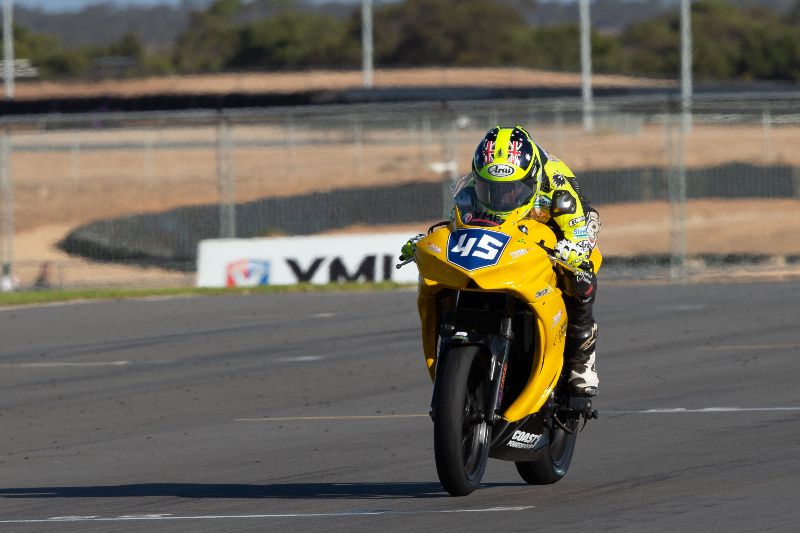 Navigating The Bend’s undulating turns where speed and confidence are vital to success, Race 3 of the YMI Supersport 300 class saw Ford come out victorious, ahead of Brandon Demmery (Rustic Flooring, Yamaha R3 321) and Harry Khouri (Excite Motorsports, Yamaha R3 321). Not far behind the podium holders was Shaw and Crump and fourth and fifth respectively.

Coming in for first, Ford stated “it was a pretty bad start to the weekend but I finished it on a real high note. I can’t thank my sponsors enough for getting me out there and helping me continue racing.”

Savouring the sweet taste of a podium finish, second place holder Demmery explained that “my last podium was back in 2016 and I’ve been through a difficult few years since. The Rustic Flooring Yamaha R3 Team worked so hard all weekend and I’m so grateful for everything they do.
“I’m stoked to be back up here on the podium! It’s been way too long!”

The Australian Supersport and YMI Supersport 300 classes head to Morgan Park Raceway, Queensland for Round 4 of the 2019 season, from 5-7 July.