TomEGun On Tour Part 6: No smiles at the back of the grid!

You are here: Home / News / TomEGun On Tour Part 6: No smiles at the back of the grid!
Back 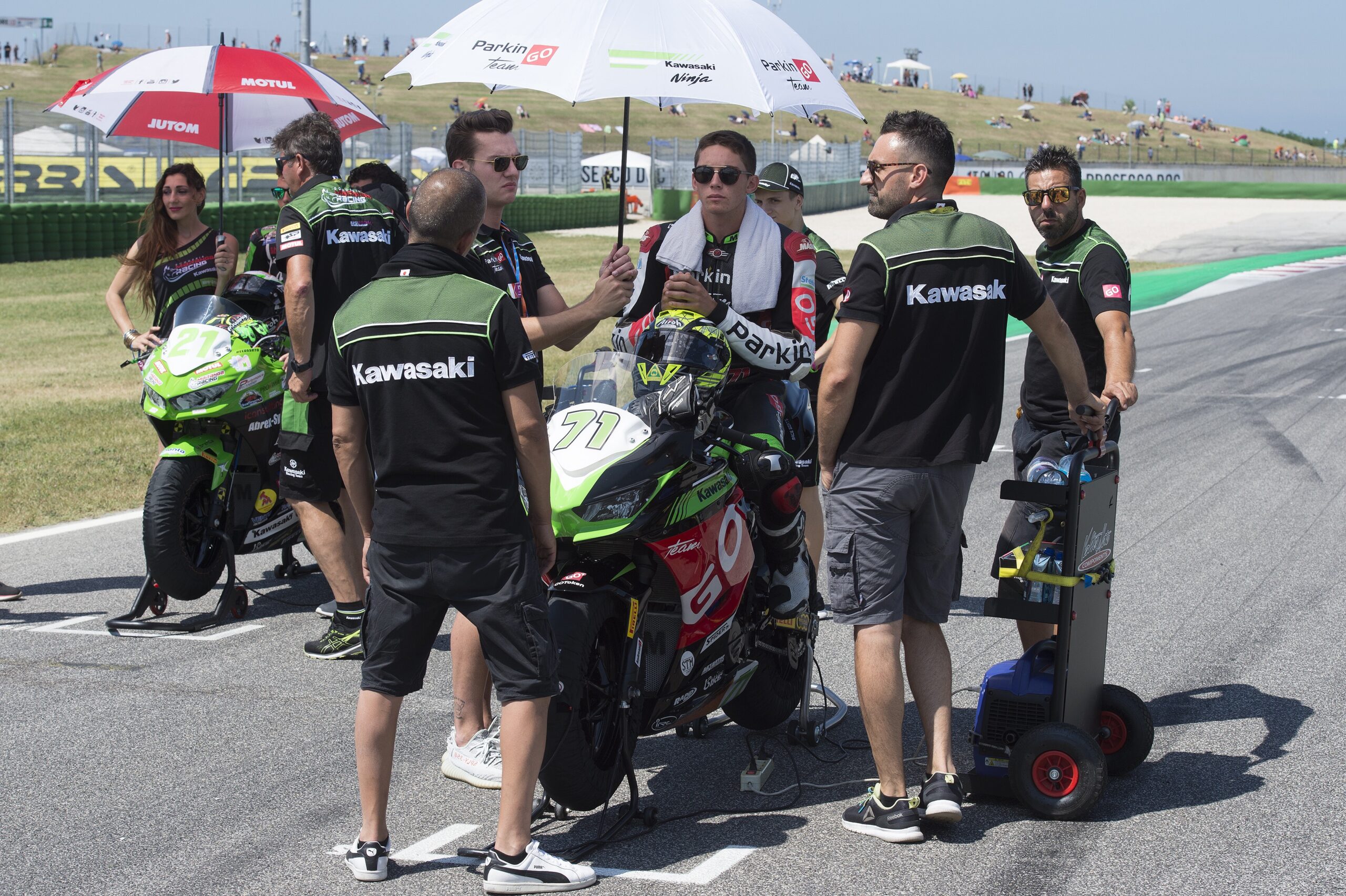 This week at Misano in Italy (22-23 June) is a home race for Tom’s ParkinGo Team, and after a double points-paying finish from the two races in the last round at Jerez, Tom was looking to continue the upward trajectory after a difficult start to the season. Unfortunately though, motorsport being motorsport…

After one week off without a race we were off to Round 5 of the 2019 World Supersport 300 (WSSP300) championship at Misano. I raced here in March in the Italian CIV Championship, so we had some data from that weekend we could use to give us a strong idea of gearing and suspension settings. The biggest difference from that weekend to the World Superbike weekend was the heat: the ambient temperature was 25 degrees higher and the track temperature 35 degrees higher, meaning grip levels would be a bit different as the track sometimes gets slippery and feels ‘greasy’ in the heat. Looking at the weather forecast in the weeks leading up to the race, the prediction was for really hot weather so I decided to train in the hottest part of the days, doing some running in the sun or riding all day on the go cart track and on the motorcross bikes to get myself acclimatised.

I arrived in Misano on Wednesday, and went for a run at about 3-4pm, the same time as my race on Sunday so I could try to replicate the conditions a little bit. I ran from my cabin near the track to the beach and went for a swim. It was very different to see a beach with no waves and literally thousands of umbrellas and deck lounges full of people, no free spaces on the sand like in Australia!

The Friday morning I was in the first group on track for Free Practice (FP)1 which meant an early start. Going first is normally a disadvantage, but that morning the weather wasn’t as hot as it was for the people who rode in Group B who had the worst of the conditions. FP2 later in the day was really hot so the bike was sliding around a lot, most people had the same problem though. On Saturday morning for FP3 despite the heat we were greeted with a wet track, too wet to use dry tyres. We went out on wets just to make sure the bike and the new positions of the foot pegs were OK. We were not going to learn much for the race though, as we had to change the bike to suit the wet conditions. 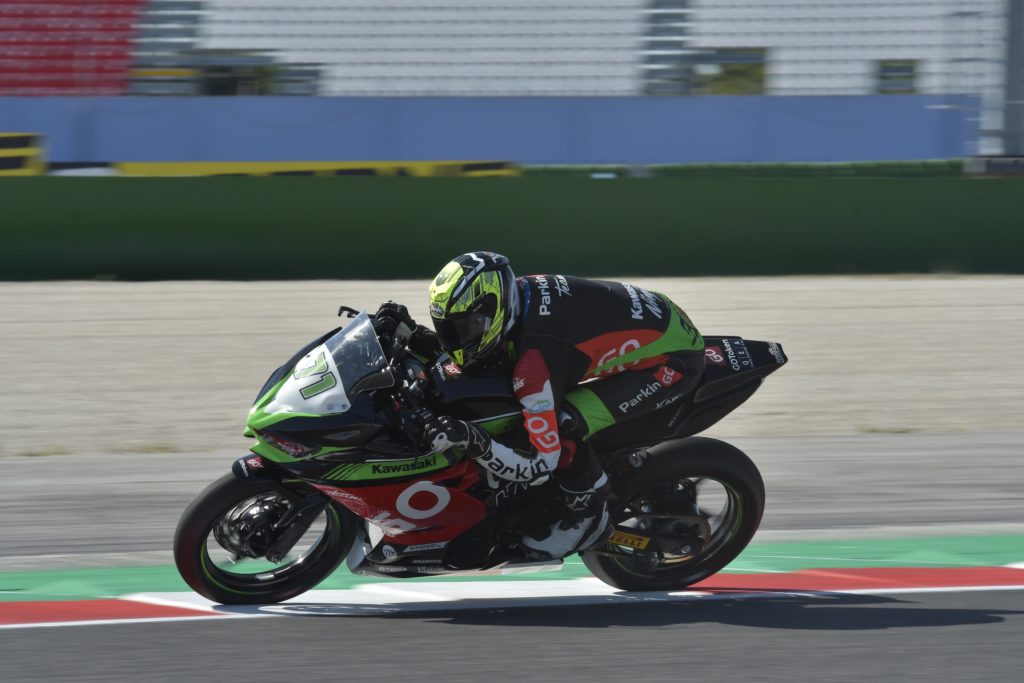 Qualifying later that day was a disaster. Usually you have six or seven laps to make sure you get one really fast lap, but during the first 3 laps I was amongst traffic and about a second off my lap times from the day before. I re-positioned myself on the track ready for another go, but then the rain started. I was stuck in P19 in Group A. Group B went out on a fully wet track, which brought up some discussion between riders about which group would get an advantage for qualifying, as usually if both sessions are the same then the times from each session are comparable. But if the weather changes between each of the two groups’ sessions, they reorganise qualifying so that the fastest from Group A is on pole, then the fastest from Group B, then the second-fastest from Group A, second-fastest from Group B, third fastest etc. Immediately I knew I was at best P37, which meant I was in the last chance race, having to finish in the top six to bump-up to the main race.

This was the first time I have been entered into the last chance race. There were heavy thunderstorms around, with the Superbikes being red flagged twice due to dangerous conditions. I really like the rain so I felt confident, but when we started I realised the bike was set up much too stiffly for how wet it was and I couldn’t get any rear grip, the bike was sliding all over the place. Once the track had dried at about 3 laps to go, the bike really started to work much better and I managed to finish sixth: the last qualifying spot for Sunday’s race. 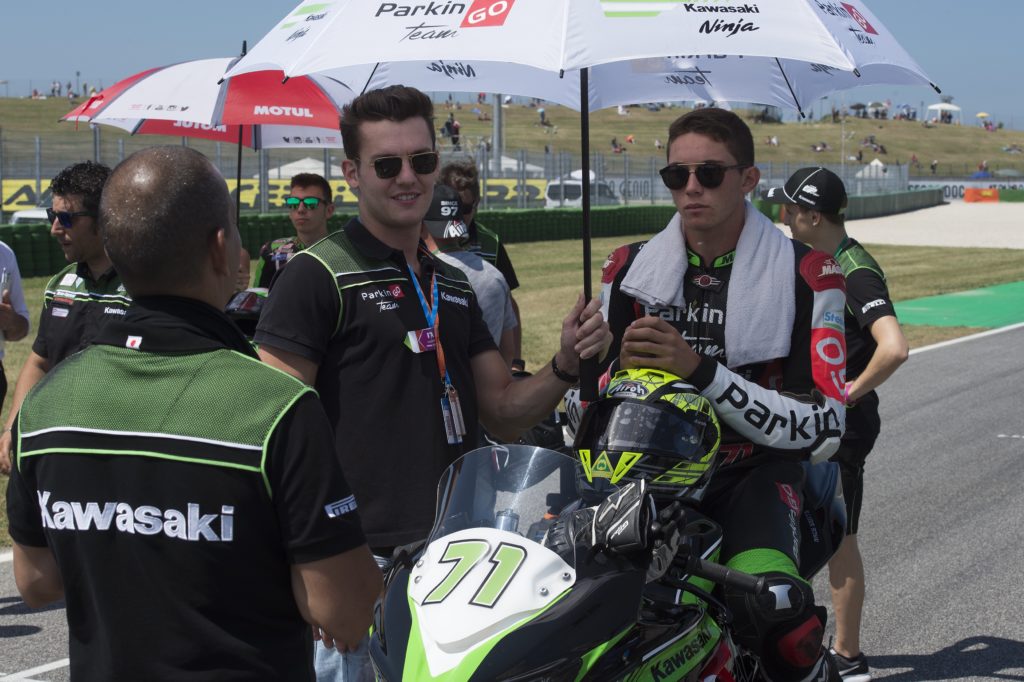 In Sunday’s race I knew it was going to be difficult starting from the back of the grid, but I was there with some other good riders who had also qualified poorly. I had a good start, I followed a really fast Russian named Nick Kalinin through Turns 1 and 2 and together we made up a few positions. Then in Turn 5 a rider crashed from the front of the group, took out four riders and slowed down a lot of people, splitting the pack into two groups. By the middle of the race I had managed to make my way to about 13th, battling in this group for most of the race. But on the last lap I had a really big ‘moment’ when I nearly high-sided; I managed to stay on the bike but lost about 10 positions. When the chequered flag came out I crossed the finish line back in 24th place. 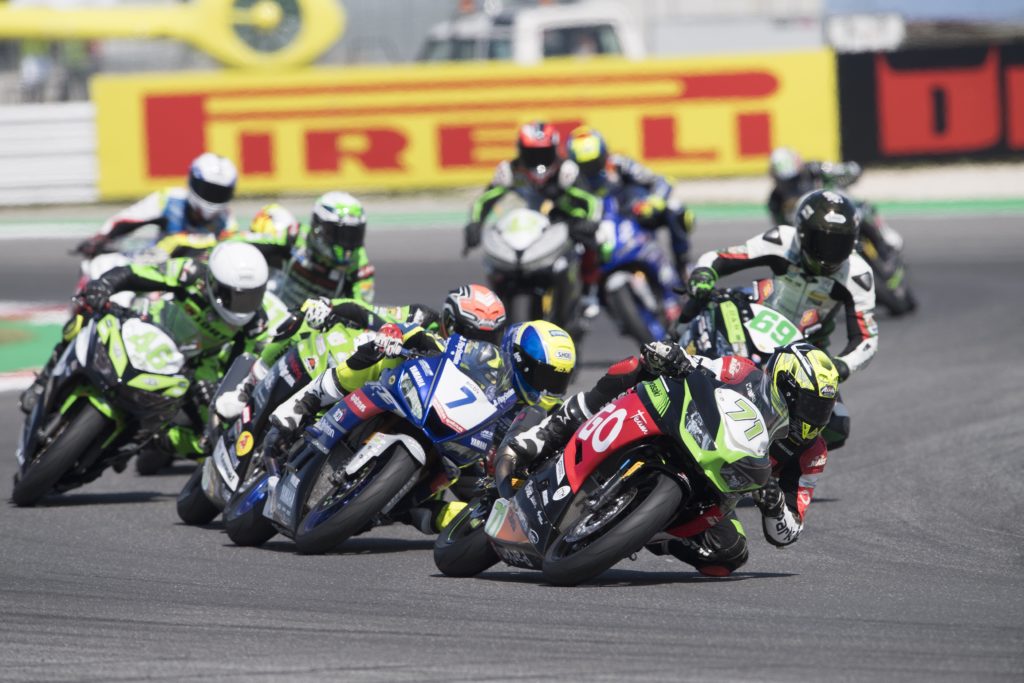 Overall, I’m not at all happy with the weekend. But now my team and teammates are back in Italy and we are going to do some solid training together before Donington. Today our riding session was postponed, so we swam in a beautiful lake for our training. With the temperature outside at almost 40 degrees it was great compromise! Tomorrow we travel to Imola in Italy for two races in the Italian CIV championship; all 3 days are set to be above 38 degrees so it will be another hot one. Then home to the apartment for two nights and off to Donnington in the UK for the next round. Until then…