‘TomEgun’ on Tour Part 5: Heating up in Jerez

You are here: Home / News / ‘TomEgun’ on Tour Part 5: Heating up in Jerez
Back 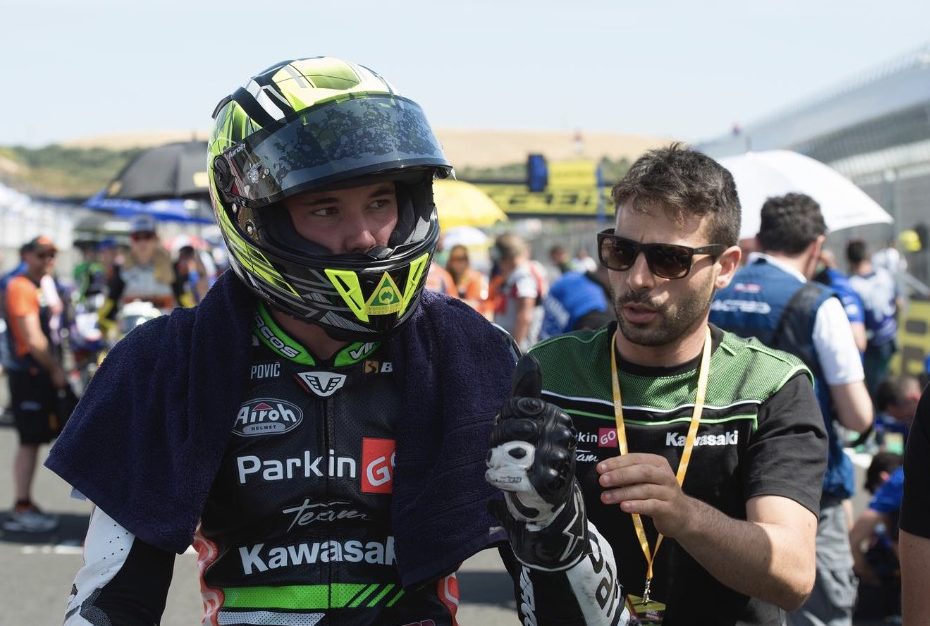 After the last round at Imola in Italy was rained out, Tom was itching to get back on track for a busy round at Jerez in Spain (June 7-9), hoping to kick-start his season with a good points-paying position:

After the bad weather during the Italian round at Imola resulted in our second race being cancelled, we were given an extra race at this round in Jerez, Spain which meant a much busier weekend than usual! I was glad that they scheduled the extra race at the Jerez circuit, because our testing there earlier in the year was super strong and I like the track a lot. Weather was forecast to be above 30 degrees all weekend which also suited me; the Europeans don’t have as much experience racing in the hot weather. It came as a big surprise however, when on Friday morning we walked out of the hotel to find puddles everywhere thanks to overnight rain. Nobody expected that at all!

Of the two groups of Supersport 300 runners I am in Group A, which means I was out on track for practice in the first group at 9am. The track was still very wet when we got going and only about eight riders decided to head out on wet tyres. But the sun was coming out, so I decided to stay in the pits for most of the early part of the session and wait for the track to dry. I did do one lap just to make sure our new electronics package was all OK, but as there was nearly zero percent chance of wet weather over the rest of the weekend I decided not to risk it. 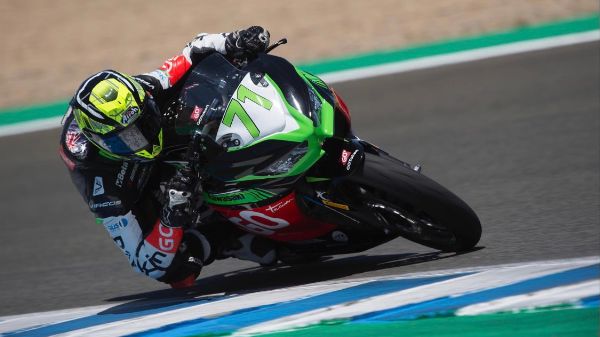 With eight minutes to go the track was still not in a good condition, but as time was running out, I decided to go out on dry tyres. I got about 4 laps in with the track drying more and more before the session finished, and while I was pretty confident I had set a competitive time, I figured I’d be a little way off the fastest riders because I didn’t push very much. As I came into the pits and walked over to the timing screen, I was shocked to find out I was fastest! I think I’m strong in these conditions because of all the experience I’ve had in dirt track back home. It’s taught me how to react when the bike is moving around a bit, and if the bike slides or the front end isn’t very stable I don’t worry about it- it feels normal to me.

I qualified 11th, even though I got stuck at the front of a group and struggled to get a ‘tow’. Finding a slipstream behind other riders is crucial in Supersport 300, helping the smaller-capacity bike to cut through the air better and maximise your speed down the straights. It’s really difficult to get in a good position in a pack, placing yourself in the draft of the other riders for the straights while making sure you have a clear run through the corners. I’m confident a good slipstream would have been worth about eight tenths of a second per lap. 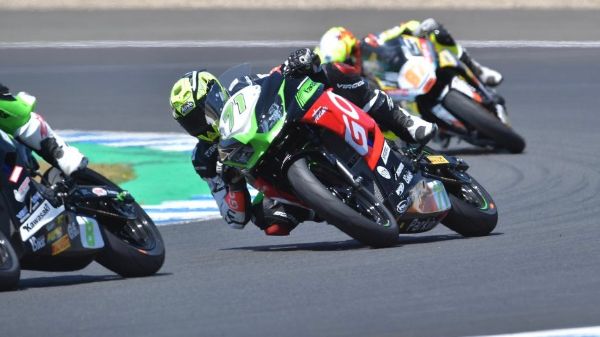 The first race was on Saturday afternoon at 5pm. The weather was still hot, so rather than sit on the start line for 15 minutes I decided to wait an extra 5 minutes in the pit box to keep cool. The first lap was really congested and I was bumped around a bit, dropping back a few positions. I worked my way back to around tenth and stayed there for most of the race. The bike developed a small electronic issue which meant we were down on power, making it very hard to stay with the group on the straights and forcing me to ride a lot faster in the corners. On the last lap, someone hit me from behind in Turn 1. I was forced wide and 5 riders flew past. I finished the race in 15th, scoring one point.

In Sunday’s race, the bike’s power problem had improved: my lap times dropped by a full second from Race 1! I was more aggressive in the first laps to keep my position, and a few of us were able to form a much smaller breakaway group at the front of the field than the day before. I rode a much faster race to finish in 9th position.

I’m happy with getting points in both the races on the weekend. The next race is in Misano in Italy, where the ParkinGo team and I know the track quite well: we have tested there before and I have had two races in the Italian CIV Championship, so it should be a strong round. Hopefully we will be able to get some more solid points there.