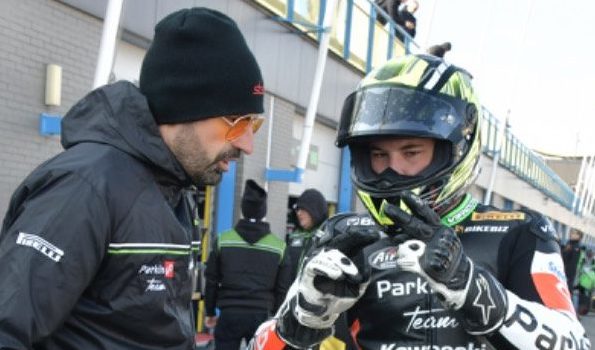 After bike problems in the last round at Motorland Aragon, in Spain, Tom was hoping for better things from Round 2 at the spiritual home of motorcycle racing, Assen in the Netherlands. Here’s how it went:

On Thursday morning we drove to the track and got there about 1pm. I got my gear ready, picked up my helmets from the Airoh truck, met up with the team and did the track walk. It was my first time in Assen for the year, so the track walk was important. Even though the track doesn’t change, it helps to get your head into racing mode and to re-familiarise yourself with the circuit. We were staying at the track for the first time in a friend’s motorhome, which turned out to be lucky; the weather forecast was for extremely cold weather across the weekend. Having the motorhome would give me somewhere to warm up after being out in the weather.

On Friday morning for Free Practice 1 I went out onto the track and straight away I had a gearbox problem: each time I rode out of pit lane I would do one lap and come straight back into the pits. The team worked as hard as they could, but we had no success in fixing it before the end of the half hour session. We concluded that our gearbox issue wasn’t a problem with the electronics, but rather with the gearbox itself, so while the mechanics pulled the bike apart I got changed in the truck where it was warm. By the time I had emerged they had found the problem, replaced the part, made a few small setup changes, and the bike was ready to go. 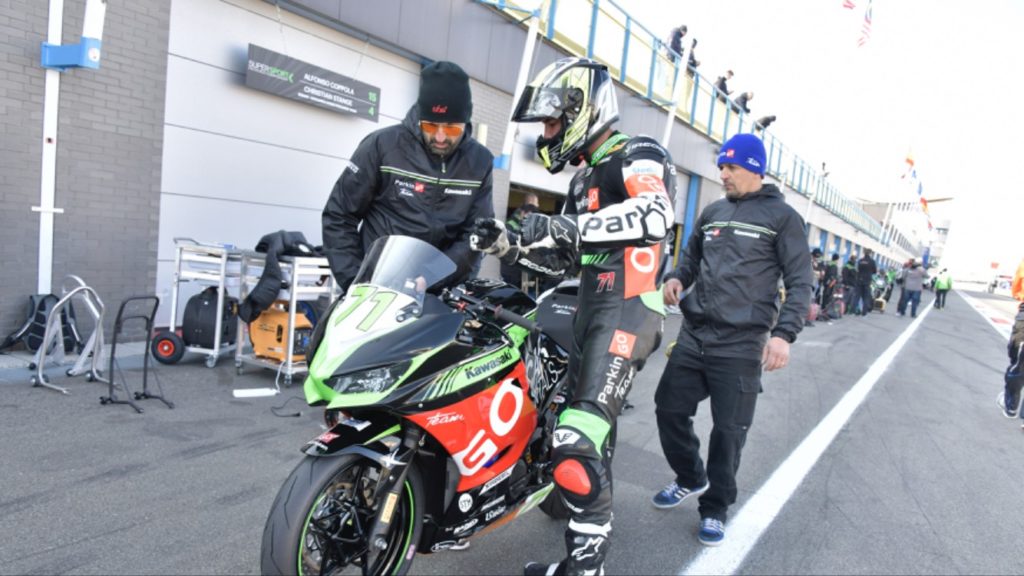 Going into Free Practice 2 that afternoon I hadn’t yet done a fast lap of the track, but I went out and tried to follow some of the faster riders to get an idea of the pace they were running. I finished 10th overall and the bike felt great. We made a few more changes to the setup afterwards, so I was eager to go and try them out in Timed Practice the next day.

Timed Practice on Saturday was only a 15-minute session, I finished fourth for my group and was feeling good for Superpole later that day. But then, just before Superpole was due to start, it started snowing!! I wasn’t too sure how that would affect things, but luckily I had placed in the second of the two qualifying sessions (Group A), so I was able to see how the first session developed and gauge the track conditions before having to go out myself. When it was our turn to go out, I was in a group with three or four fast riders. The track didn’t feel too bad, so I started building up my pace but was slowed up a little by traffic.

With about eight minutes to go it started to rain, so most people pulled into the pits- including me. I was in fifth at that stage, but on the next lap a lot of people went faster and bumped me back to 17th in Group A: four tenths of a second makes a big difference. Not long after, it started to snow again so the team decided I was done. The combined qualifying put me in 27th which I really wasn’t happy with, but I definitely learned something from this: Next time I would definitely go back out on track because my qualifying position could only have improved from 27th. 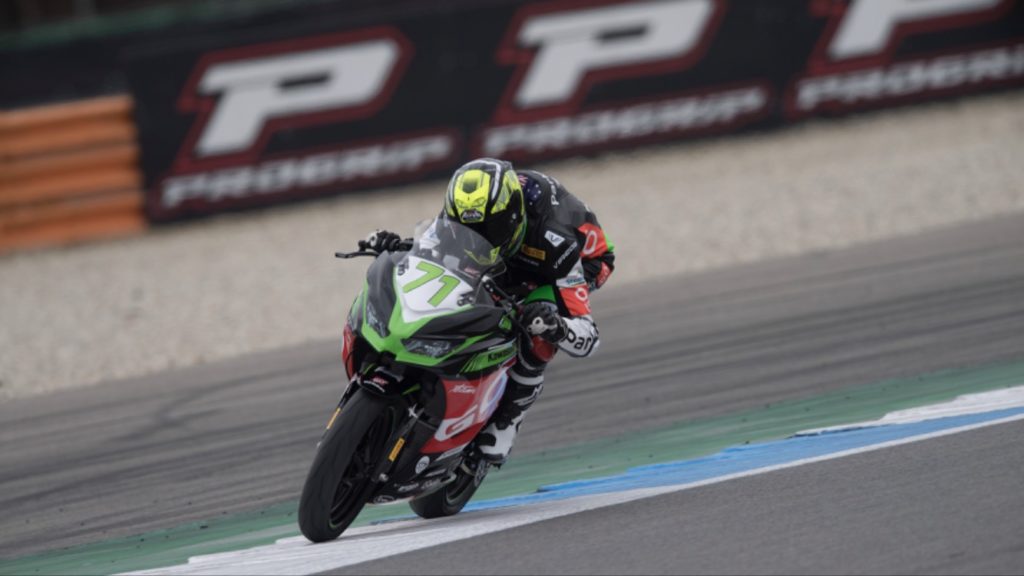 In Sunday morning’s warm up I went out with a few people who qualified on the front two rows which really helped: I stayed with them and tried practicing some passing because I was starting so far back, but I was feeling quite good. I had the ninth fastest lap time in warm up and not far off the fastest.

I had lunch early to give it some time to settle in before the race. With it being so cold before every session, I would go for a short run to warm up before I did my normal stretches, then put my leathers on, put my helmet on, pull my gloves off the tire warmers (to warm them up- my hands were freezing!) and pull out of pitlane. 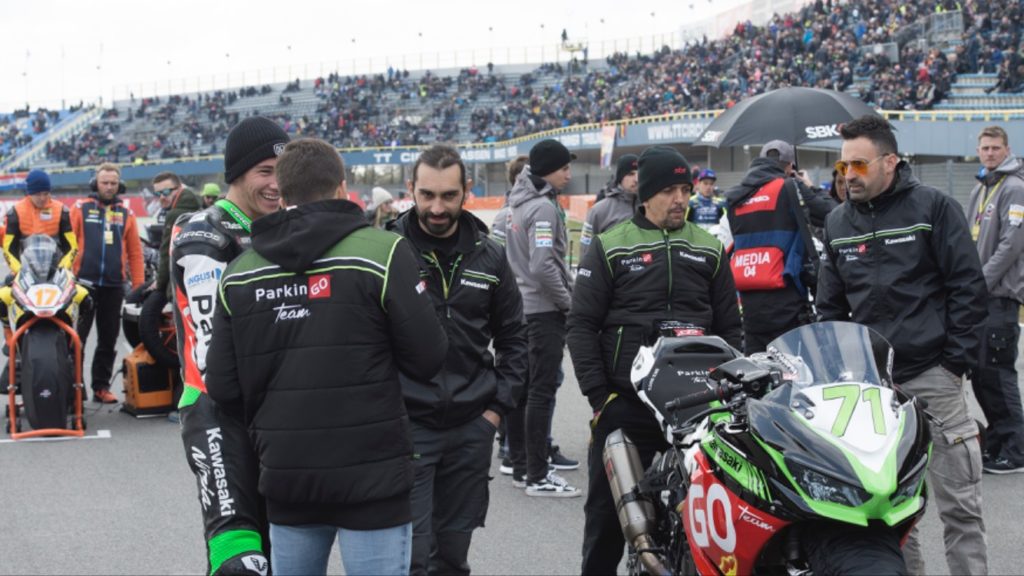 They held the lights for a really long time, I’m surprised no one did a jump start. I got a really good launch and made it through the first corner safe. In turn five, which is the tightest turn on the whole track, one of my good friends nearly high-sided right into me. I made it through the tightest part of the race safe and got on with the task of working my way up to the front. 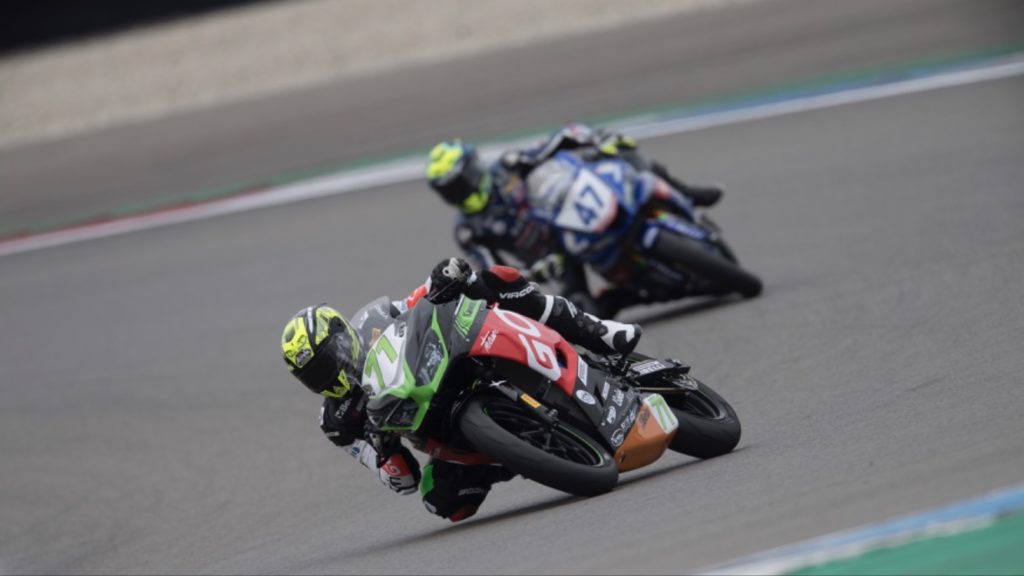 Passing 3 or 4 riders each lap, I gained ten positions before two riders in front of me started to lose time to the main group. I quickly passed them, trying to stay with the leaders and make up a few more spots. But they pulled alongside in the slipstream down the back straight into a very fast left-hand corner which you enter in 5th gear, full throttle. Having them either side of me put me on a strange line for corner entry, but I wanted to beat them both so I could stay with the pack. Because I was wider than normal, I hit a few bumps and lost the front, flipping through the rocks for a few seconds then crashing onto a paved section which brought me to a stop. I turned around to see my bike do its last flip onto its head and come to a stop in the grass. My whole body was hurting, and I knew my bike was finished so I walked off the track.

My teammate, who hadn’t qualified for the race was waiting for me on a scooter. We watched the race together from the side of the track, then went to the medical centre as it’s compulsory to go if you crash and don’t continue in the race. I got back to the garage to find the team unloading my bike which was in a terrible condition, the worst of any crash I have ever had. They were worried that I had been injured, but I told them that I was okay and apologised for messing up the bike.

That night we drove south in Holland to where I was living last year. I’m pretty sore but going to start training straight away to do my best to prepare for a better Round 3 at Imola, near Bologna in Italy (10-12 May).