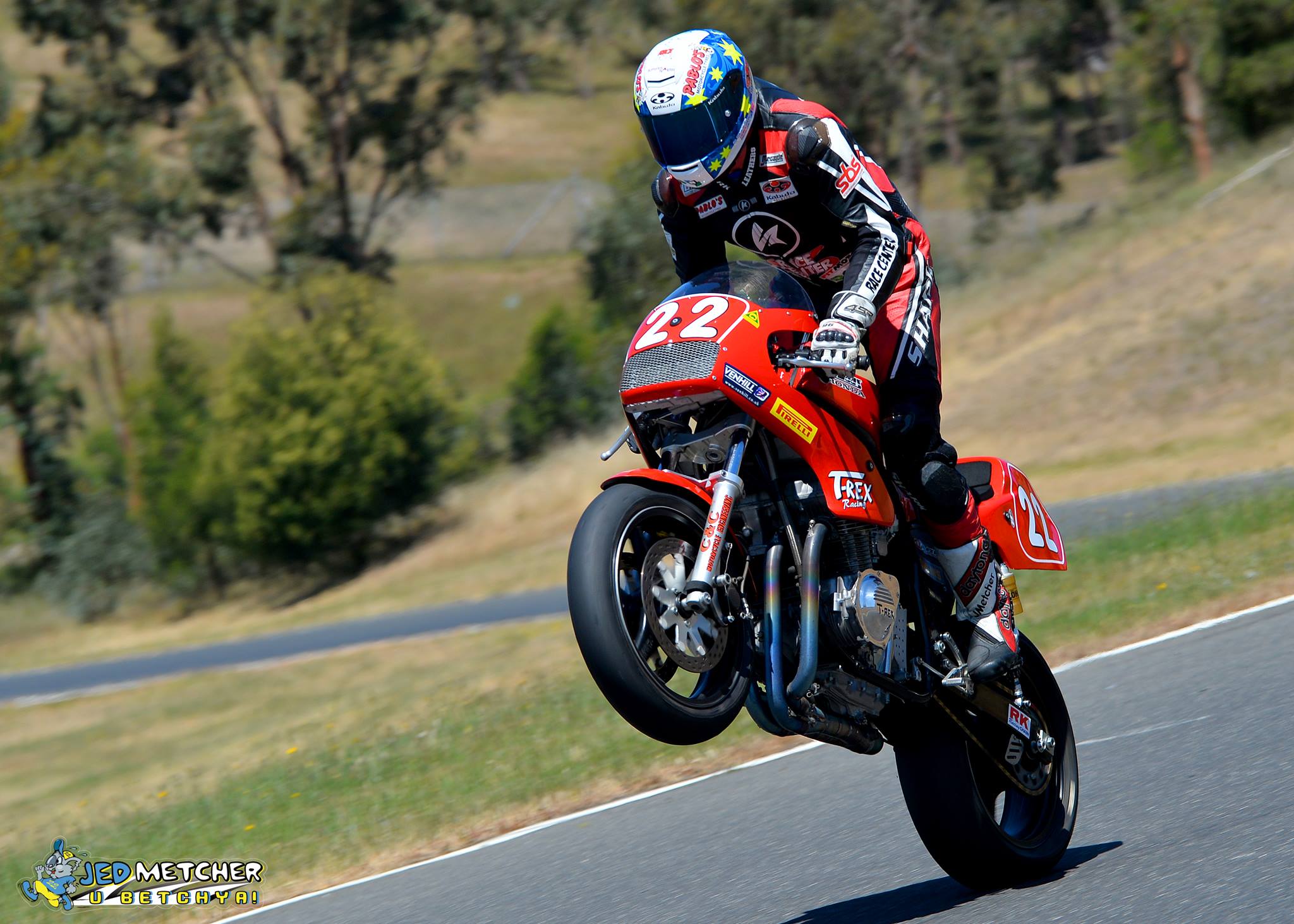 Preston Motorcycle Club stepped up to the plate to run the 2018 Shannons Australian Historic Road Racing Championships at Broadford State Motorcycle Sports Complex in Victoria last weekend. Although Preston are a mostly modern road racing club, their vast experience with running the Victorian Road Racing Championships meant the program ran ahead of schedule majority of the weekend.

Saturday saw a fly over and aerial display from the Roulettes during the lunch interval and Saturday night a fireworks display was put on for all those who were either camping at the track or staying locally.

After a coolish and damp start to the Thursday Practice, the weather also turned around with cool but dry conditions for the afternoon and qualifying on Friday, then bright sunshine with temps in the mid to high 20’s for both Saturday and Sunday race days. The conditions couldn’t have been better.

The new section of pits along the end of the main straight was completed and utilised well by competitors, giving all teams plenty of usable pit area to work in and allow the riders to concentrate on the racing without hinderance. The racing itself was fast and competitive, with classes not being decided until the final race. It was also great to see a huge field of sidecars make the journey to Broadford to contest their national historic championship. Along with the ballistically fast period 5 unlimited bikes, the sidecars were crowd favourites, with spectators lining the fence every time they took to the track.

Jed Metcher started off the weekend with some set up issues, however Rex and the team worked continuously to improve the bike throughout the weekend and it paid off with a win in the Period 5 Unlimited class.

Dean Oughtred on the Carl Cox Suzuki Katana struggled with a grabbing clutch throughout the weekend. This issue was eventually the one thing which lead to the bike and rider going from leading the points to failing to score points. A failed launch in Sundays first race meant that Dean had to play catch up from last into turn one off the start. Unfortunately, in his endeavours to make up places, Dean slid out at turn one. Thankfully he was not hurt, but the broken bike was unable to be repaired in time for the next race, putting paid to any chance Dean had of taking out the P5 silverware. 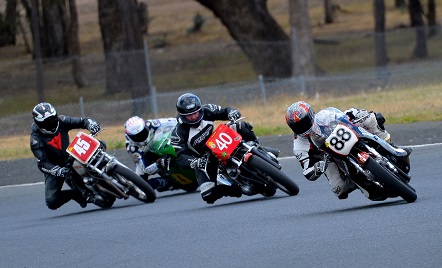 Tristan Culvenor riding the Gavin Cosway P&M Kawasaki had a difficult weekend. The bike dropped a valve the previous weekend at the Southern Classic and was rebuilt in a hurry after just managing to source parts in time. However, the replacement parts weren’t up to the specs of the previous build and Tristan had to nurse the bike all weekend to make it through. He still managed to make the bottom step of the podium come end of the weekend picking up third place in the P5 unlimited class.

Dean Oughtred made up for his period 5 challenges by taking out the P4 unlimited and P6 750 classes, so ended the weekend with a double championship win. Dean didn’t have it easy in the P6 750 class, with Nathan Spiteri getting closer to Dean each time they took to the track. Not bad considering this was the first outing for Nathan on his newly acquired Honda RC30. Nathan ended the weekend in 2nd place in the class.

An unfortunate casualty of “electrical” gremlins was Brendan Schmidt, riding his father Rod’s newly built GSXR750. It was Brendan’s first race event since 2016 and it was great to see the talented young rider back on a bike and going quick despite the issues. Scott Honeychurch took out 2nd place on his GSXR750, with Peter Bellchambers 3rd on his GSX748 Suzuki.

Brendan Wilson had mixed fortunes over the weekend on his Kawasaki ZXR400, an electrical issue surfaced Friday and it plagued him all weekend. But despite the gremlin restricting the bike to 14,000rpm, 2000rpm off peak revs, all weekend, he qualified on pole and won each race, becoming the P6 400cc national champion. Tim Podt took out 2nd place on his gorgeous sounding NC30 VFR400 Honda, with Owen Ward Third on yet another V4 Honda.

In the 250 Gp class, Matthew Turner made a return to racing. Matthew was a 250cc production front runner in the 90’s and showed he hasn’t lost much of his speed over the years. However, the bike was to suffer some issues all weekend making it a challenging weekend. Friday the bike wasn’t running too well and then Sunday Matthew suffered with a slipping clutch and had to nurse the bike home barely making it to the chequered flag in Sunday’s last race. Matthew still managed to take 2nd place behind John Hazeldene on his lovely Yamaha TZW250. Third place was taken out by Ben Shaw on his super-fast Kawasaki KR1 250.

The Preston Motorcycle Club and Race Marshals Victoria are to be commended for the organisation and professionalism in which they ran the event, their efficiency ensured an early finish to racing followed by a rare packed house for trophy presentations.

Although the bikes may be from a different era the competitors certainly are not, it was fantastic to see competitors from all generations supporting and respecting the club and championships by remaining to collect their trophies-one trophy left at the end of the day, a champion who had a plane to catch but took the time to apologise and thank the club before leaving.

Andrew Coghill, winner of the P6 Ultra-Light Class wrapped up the presentations and summed up the weekend with “I got my first 30-year-old Classic Bike when my son Tait was born, fast forward 26 years and here we are first and second in the Australian Historic Championships-Dream Big People”

Congratulations to all those rider and teams who attended and to all the new Australian Historic Road Racing Champions. 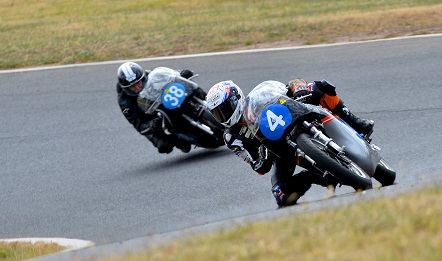 What the riders had to say:

Victorian Tom Bramich is the current Australia Super Sport 300 Champion and at the age of 21 years old, he was one of the younger generations to enjoy the thrill of winning on a piece of nostalgic history.

Tom, who has been racing since he was 6 years old, took out the P4 and P5 class will be heading to race the 2019 season in the World Super Sport 300cc for Carl Cox-RT Motorsports by SKM Kawasaki.

We caught up with Tom after his fifth championship win, “I had very enjoyable this weekend at the Australian Historic Titles riding the Ron Angel prepared period 4 and 5 Paton 500’s. The bikes are kept and maintained to the highest standard and it is a pleasure to ride them. It is a credit to Ron with how successful the bikes have been with the period 4 Paton winning 48 races now and 5 Australian titles between both bikes. I’m really grateful to Ron Angel Classic Racing, Nolan Helmets and Avon Tyres for supporting me during this fantastic event.”

Coming from a completely different racing background, forty-four-year-old Victorian Lachlan Hill, who didn’t start racing until he was 27 years old, was stoked to win his 5th Australian Historic Championship. “I had a great weekend winning every race from start to finish and breaking two lap records, the TZ 350 is my bike and I was riding the Rotax 250 for Ron Angel Classic Racing, which I got fourth on. Both bikes worked brilliantly thanks to David Hall, our mechanic, keeping them, both running fast and the Avon tyres were perfect. Thanks so much to my sponsors Ron Angel Classic Racing, Avon Tyres, Promecha Suspension and The Hall Effect for sponsoring and assisting me”

Overall, I’ve had a very fun weekend, and it’s great to be back out on a race track competitively again! I’m also happy to be able to claim the Australian historic championship for Rex and Buck this weekend as a bit of a thank you for all their efforts.

Massive thanks to Rex Wolfenden, Buck Rogers and Paul Walkley for all their support over the weekend. They are the guys behind the show who make it happen, so it’s nice to reward them with the Australian Period 5 Championship. We are now very excited to get this bike down to the Phillip Island Grand Prix Circuit at the end of January next year for the Island Classic and having another real go. The T-Rex Honda Harris is a lot closer to where we want it to be, so roll on the Island Classic.

John Clancy and Warren Grub have been racing together for ten and this is their third Australian Historic championship win.

John: “A much sweeter victory than last year on our Dewith Honda at our home track, thanks to J and T Contractors and Dewith Motorsports”.

Warren: “A much better win than last year and a huge thanks to John for pulling it all together again for us this year -looking forward to hopefully getting over to Collie 2019”.

Mark Knight has been racing for over 30 years, he and Dave Rumble have been racing together for over 20 years.

Mark: “A great days racing, a fabulous weekend, I had a ball.”

Dave “Absolutely awesome event, and to win a back to back championship means even more after decades of hard work. Thanks very much to Marks riding and the awesome help from Mick from Dewith Motorsports”