You are here: Home / Enduro / Price Returns for Second Finke Double Attempt
Back 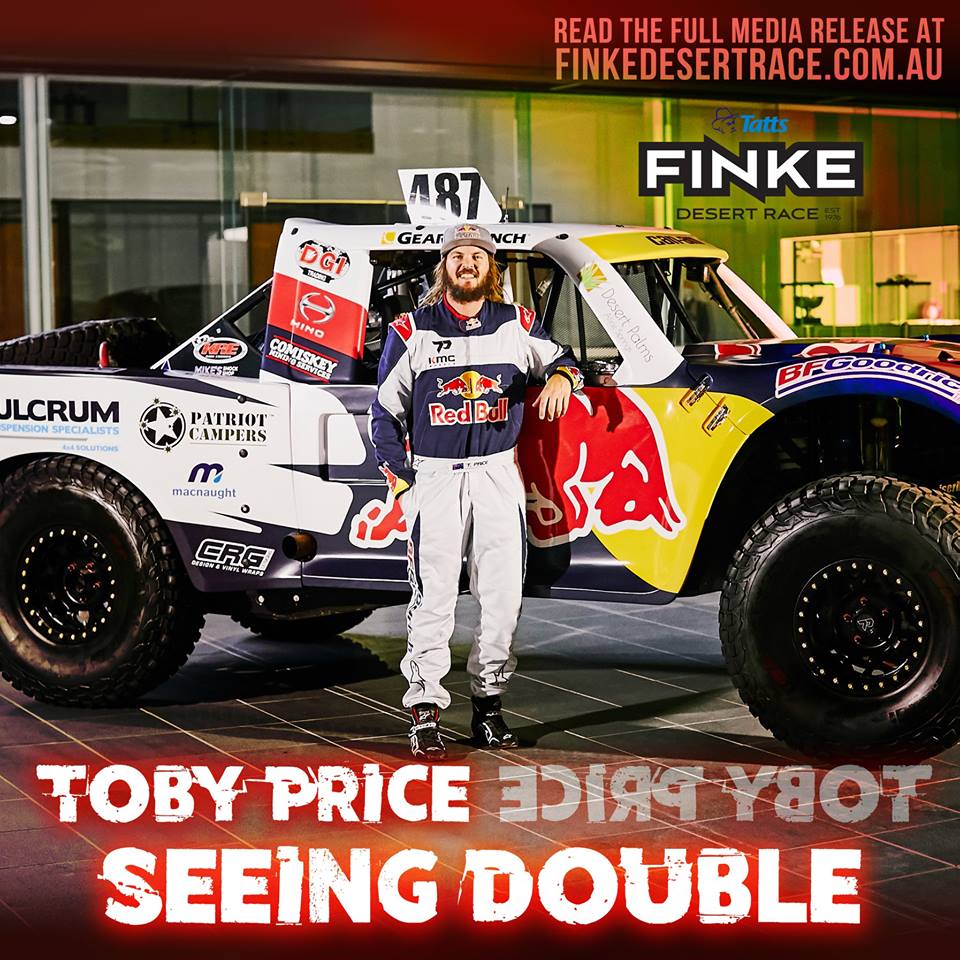 Five-time ‘King of the Desert’ Toby Price has announced he will again attempt the
‘Iron Man’ Finke Double at the 2018 Tatts Finke Desert Race, in Alice Springs,
aiming to make history by winning both car and motorcycle categories.

Price attempted the double for the first time in 2016 and successfully won the
motorcycle category, tying him for the most wins in Finke history, but was runner-up
in his first attempt in the car category.

In 2017, Price was unable to defend his 2016 motorcycle win due to a femur injury
sustained at the Dakar Rally, but drove in the Truck category, only to stop 40km
short of the finish line with an engine sensor failure.

The Australian finished 3rd in the 2018 Dakar Rally in January and has had
valuable seat time in Trophy Trucks in America and is this year hoping to eclipse
the motorcycle categories win record with a sixth win and be the first to claim the
Finke Double with a win in the truck category as well.

This year, Price will first run in the Truck Category on Day 1 from Alice Springs to
Finke and fly back to the start line in a light aircraft in time for the Motorcycle leg
to begin and repeat the 230km ride for the second time.

Price will follow the same procedure on Day 2 driving from Finke to Alice Springs
in his Red Bull Trophy Truck and then return to the start line via a light aircraft to
complete the Motorcycle leg.

Price is ecstatic to again attempt the ‘Iron Man’ Finke Double and is eager to
become the first to claim the title that has escaped him previously.

“Since I attempted the Double in 2016 and we didn’t claim the win in the truck
category, I’ve been extremely keen to try again and was gutted when I was
injured last year and couldn’t do the bike. We’ve had a couple of months to
prepare for the truck and the bike and I’m feeling good. I can’t wait to get out and
do our first test with the truck, this is going to be extremely challenging but
rewarding if we can get it done,” Price said.

Being able to complete the feat again will be no easy task, and the prospect of
Price taking out first place in both categories could potentially never be matched
again.

“This is a tough ask of any competitor to compete and finish the car section, fly
back along the track to the start line and then compete in the bike section,” said
Antony Yoffa, President of the Finke Desert Race Club.

“Then they do the same again on Race Day 2 – this is no easy feat with 900kms
covered over the two days if all legs are completed! If Toby is able to win both
categories it will be an amazing story to come out of the 2018 event.”

The Tatts Finke Desert Race will run from June 8-11 through the desert country
from Alice Springs to the small Finke community in Aputula.