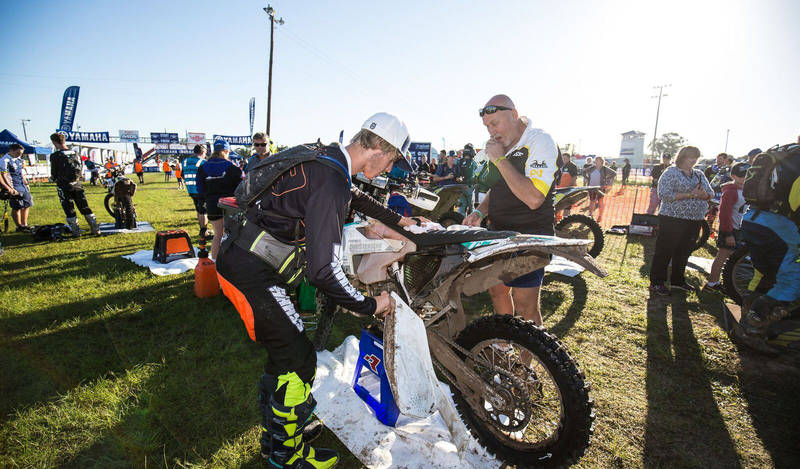 New South Wales (NSW) have claimed the Challenge Trophy at the 2018 Yamaha Australian Four Day Enduro (A4DE) at the birthplace of Australian Enduro Cessnock, New South Wales. NSW took out three of the four days to walk away as the premier state in Enduro racing. Victoria have taken out the Junior Trophy after putting together a solid day four to back up their first three days results. NSW have also swept the Ladies Trophy taking out all four days to walk away convincing winners.

Coming into day four the teams were feeling the effects of a tough first three days, but a 45km trail ride and the all-important final moto was what stood between the teams and the finish line. The final moto was held at Cessnock Racecourse, a wide grass track was what faced the teams as they battled the 2.1km long course for five laps.

Senior Trophy
NSW have taken out the battle for state supremacy as they took out day four of the A4DE, finishing the day with a combined time of 1:18:21. Josh Green, Brad Hardaker, Broc Grabham, Scott Keegan, Michael Driscoll and Stefan Granquist all battled throughout the four days with rough and tough conditions to take out the Challenge Trophy on their soil. Queensland finished off their A4DE campaign with a second on day four which handed them second overall, Lachie Stanford, Luke Styke, Kane Hall, Cameron Vinsteasd, Thomas Jenner and Christian Springer clocked in at 1:22:01. Victoria rounded out the podium in the Senior Trophy, pushing on day four but just not finding the speed required to compete with NSW and QLD, stopping the clock at 3:04:01.

Junior Trophy
NSW have taken out day four at the A4DE in Cessnock with a time of 0:54:01, but Victoria have had the last laugh in the Junior Trophy taking out the overall with a second place on day four. A time of 0:55:02 was enough for the Victorians to claim the overall with Stuart Holt, Jesse Lawton, Trent Tucci and Andrew Wilksch putting together a solid four days of riding. Western Australia rounded out the podium in the Junior Trophy on day four, to back up a consistent four days. Brock Buckingham, Nathan Howe, Jamie Makin and Max Vlasich put in a time of 1:02:17, which was enough for third on the day and overall.

Ladies Trophy
NSW have swept the Women’s class taking out all four days at the A4DE in Cessnock, taking away a convincing victory on day four with a time of 0:28:59. The team of Jessica Gardiner and Emelie Karlsson was a step above throughout the four days, and went home convincing overall winners. Australian Capital Territory fought hard and battled with NSW but just couldn’t match the pace, clocking in at 0:33:17. The second place on day four handed ACT second overall in the Womens class with Courtney Rubie and Julie Denyer. Queensland rounded out the podium on day four, with Jemma Wilson and Tamara Gray combining for a time of 2:14:27. The efforts on the final day handed QLD third place overall.