You are here: Home / Motocross / Malkiewicz Pipped at the Post in Thrilling WJMX Qualifying
Back 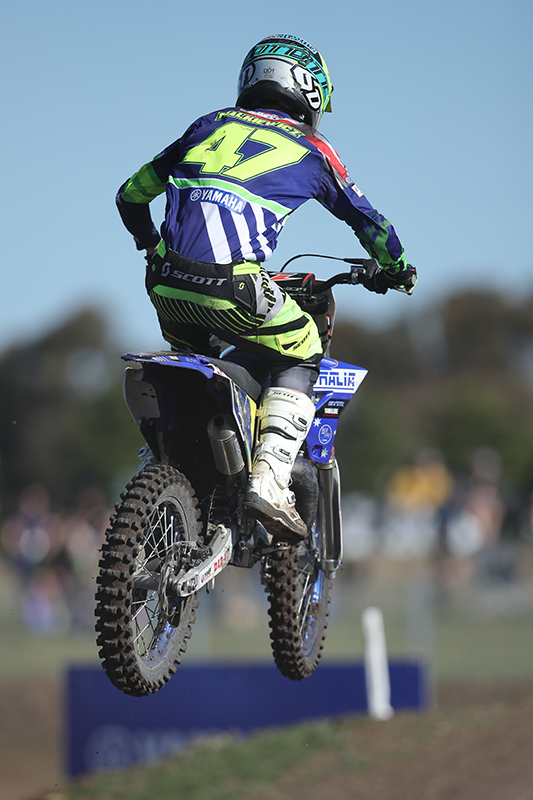 2018 Pirelli MX Nationals Development Champion Bailey Malkiewicz has been piped at the finals stages of qualifying at the 2018 FIM World Junior Motocross Championship (WJMX) at Horsham, Victoria. Saving his best lap for his last Malkiewicz put in a lap of 1:48.759, but it wasn’t enough as Italian Mattia Guadagnini swooped in to qualify fastest with his 1:48.434.

Malkiewicz enjoyed the rough conditions and being on the YZ125; “It was quite slick out there and that made it easy to make mistakes, the track changed a lot from this morning and became a bit rougher which I enjoy, and we gained some time. I’m happy with how we qualified, and I can’t thank Yamaha enough,” finished Malkiewicz

The next best of the Australian riders was Korey McMahon aboard his KTM, qualifying fourth fastest with his best lap of 1:49.008. Just outside the top five was John Bova, who had been consistent throughout the day, collecting sixth with a 1:49.701.

Blake Fox put his KTM inside the top ten, after dashing around the Horsham circuit in a time of 1:49.957. Making it five Australian riders in the top ten was Regan Duffy, who’s time of 1:49.887 qualified him ninth fastest.

The Aussie assault didn’t end just inside the top ten, with Dante Hyam just outside in 12th after clocking a best lap of 1:50.540. Just behind Haym was fellow Aussie Matthew Farby who qualified in 13th.  Noah Ferguson has qualified in 17th position but had good speed in the first practice session this morning, giving him confidence heading into tomorrow’s races.

The next Australian to qualify was Alex Larwood, with his best lap of 1:52.110 putting him in 23rd, Caleb Clifton was throwing his bike around over the big jumps here at Horsham on his way to qualifying in 26th position.

Ricky Chalmers ended today’s qualifying session in 27th position, and the Aussie contingent was completed by Riley Findlay in 32nd.

The quality on show here at Horsham is first class and the Australian riders are mixing it with the best in the world, the 125cc class is back in action tomorrow with the two races to decide who will be the 125cc WJMX Champion.

Race one will start at 1:10pm and then the riders will be back for their final race of the day at 4:10pm, to keep up to date with how the Australian riders are going head to live timing, MA Website, MA Facebook or the MA Instagram.