KTM AJMX action heating up with all finals underway in Rockhampton

You are here: Home / News / KTM AJMX action heating up with all finals underway in Rockhampton
Back

KTM AJMX action heating up with all finals underway in Rockhampton 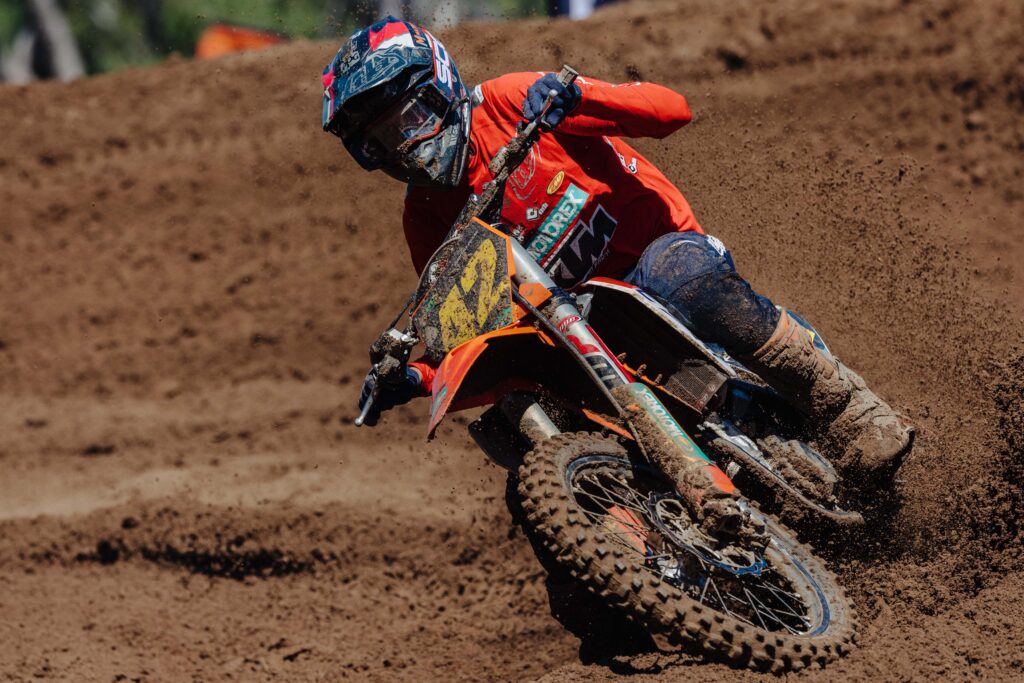 The 2022 KTM Australian Junior Motocross Championship (AJMX) is heating up in Rockhampton, with finals commencing for all classes and the action intensifying at Six Mile Raceway.

With the sun out and conditions improved from day two, yesterday’s winner Byron Dennis continued his victory run in final two for the 128cc to 150cc 2/- & 200cc to 250cc 4/ 15 years category, trailed again by Kayden Minear (KTM) and Seth Burchell (Yamaha) in third.

Final three for the class saw Minear turn the tables, grabbing an important 7.093s win ahead of Dennis as Kobe Drew (Yamaha) returned to the top three with a comfortable P3 ahead of Burchell – the leading quartet seemingly a cut above their rivals.

In 100cc to 125cc 2/ – 15 years, Minear took the final two glory leading Dennis and yesterday’s winner Drew, as the third final saw Minear on top again, this time from Burchell then Dennis.

Danielle McDonald (Yamaha) rose to the occasion in Female 100cc to 150cc 2/- & 200cc to 250cc 4/ 13 to under 16 years final two, sprinting to a 10.731s victory ahead of Darci Whalley and final one winner Madi Simpson (Honda). Simpson returned to the top step in final three, besting Whalley and McDonald who notably posted the fastest lap of the race.

The second Female 85cc 2/- & 150 4/- All Wheels 12 to under 16 years class final saw Emily Lambert take a slim 1.378s victory from the hard-charging Karaitiana Horne (GASGAS) as Simpson completed the top three. Simpson claimed the victory in final three as Horne was P2 once more, while Lambert was third.

Finals commenced for the 100cc to 125cc 2/-13 to under 15 years category, with Heat 3B winner Owens staking claim to the early advantage with a win in final one, leading Cannon and Alsop, while heat 3A victor Ky Woods (GASGAS) was fourth.

85cc 2/- & 150 4/- Standard / Big Wheel 12 to under 14 years final number one saw Heath 3A winner Heath Fisher (Husqvarna) charge to a 17.3s victory in front of heat 3B leader Jack Deveson (Husqvarna), with Jackson Fuller (GASGAS) rounding out the rostrum as two races remain.

Heat 3A winner Heath Davy (Yamaha) continued his winning ways in final one of the 85cc 2/- & 150 4/- Standard Wheel 9 to under 12 years division, as Seth Thomas (KTM) and Bodie Court (GASGAS) were P2 and P3 respectively. Heat 3B winner Kyle Harvey (KTM) finished fourth.

Davy also crossed the line first in final two for the 65cc 2/- 10 to under 12 years class, finishing in front of opening final winner Thomas as Deegan Fort (Yamaha) completed the race third. The top three finishing order remained the same for the third final in the category.

Ethan Wolfe started the 65cc 2/- 10 7 to under 10 years finals in the best possible way, taking a commanding 44.866s victory ahead of Beau Campbell (GASGAS) and Kyron Trott. Wolfe also took the win earlier in the day in heat 3A for the class, as heat 3B winner Blake Bohannon completed the first final in P5.

Yesterday’s winner Jack Holliday (KTM) claimed a nail-biting 0.079s victory in the second 50cc auto 7 to under 9 years final, inches ahead of Mason Ezergailis and Ky Sproule. The third final in the category was another thriller, with Ezergailis besting Holliday by just 0.575s as Hudson Francis completed the top three. Notably, Sproule finished seventh.

Champions will be crowned tomorrow with finals two and three coming up for categories that contested heats, while classes that went straight to finals will contest their fourth and fifth bouts. Full results can be found at speedhive.mylaps.com.