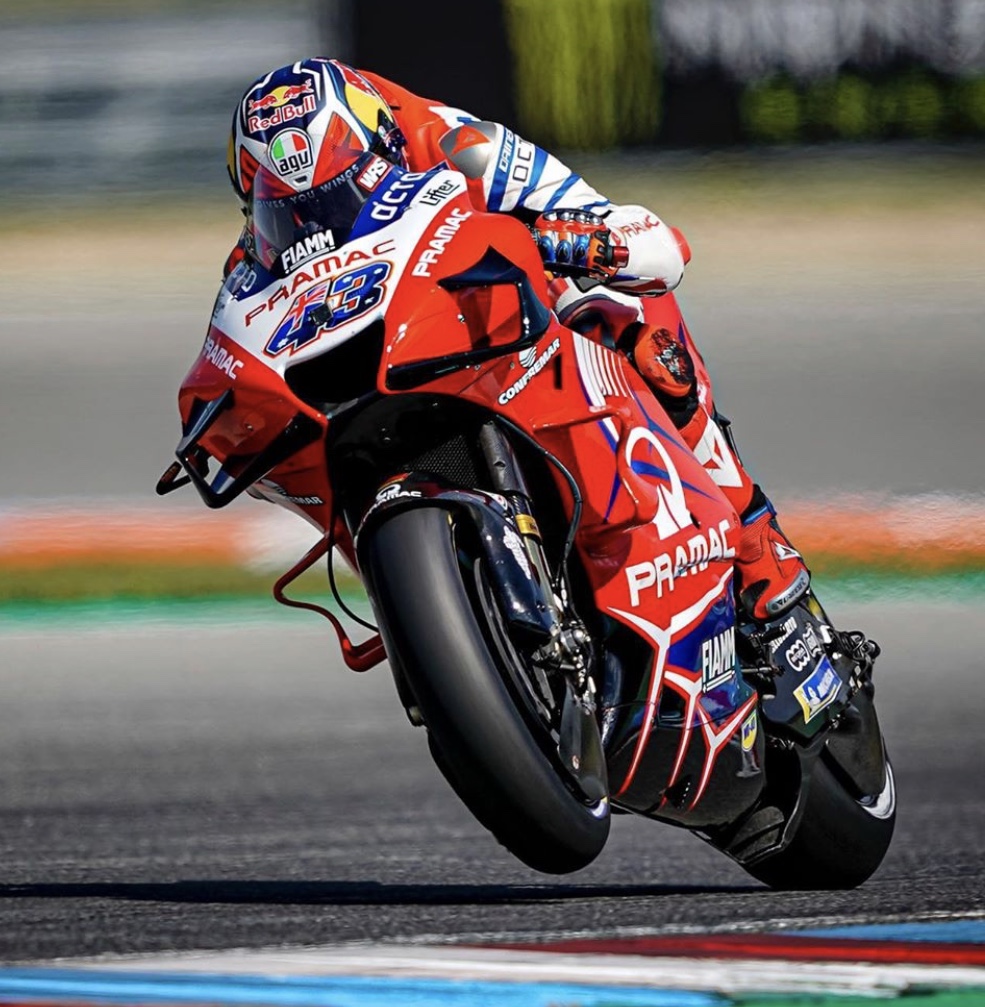 This past week saw some great results with our Australian riders taking on the world’s best and standing on the podium.

Jack Miller – despite having a serious shoulder injury suffered during practice, the tenacious Australian fought hard throughout the Austrian GP and was involved in a last lap, last corner battle for the win, but was over taken, securing 2nd, and now sitting 3rd in the championship. 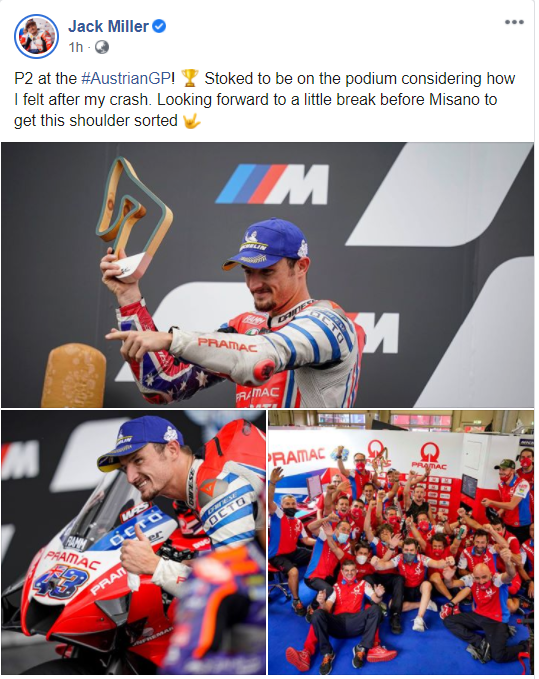 Remy Gardner – scored a sensational 3rd place in Moto2 having redeemed himself from the previous weekends crash in Austria. A simply spectacular ride from the young Aussie. 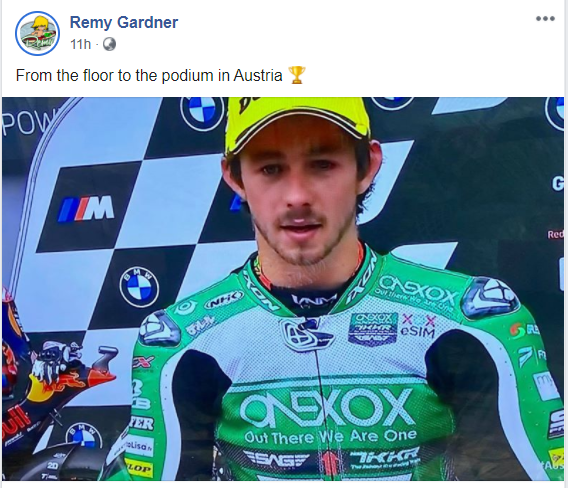 While our Australian riders had mixed results in Latvia they will be looking forward to next months MXGP in Italy.

Mitch Evans – in the MXGP class improved on his results in the last Latvia round, and now sits in 12th place, in perfect striking distance to jump into the top 10.

Bailey Malkiewicz – suffered a few crashes at Kegums Lativa scoring a 16th and 20th and sitting 25th in the MX2 Championship standings. 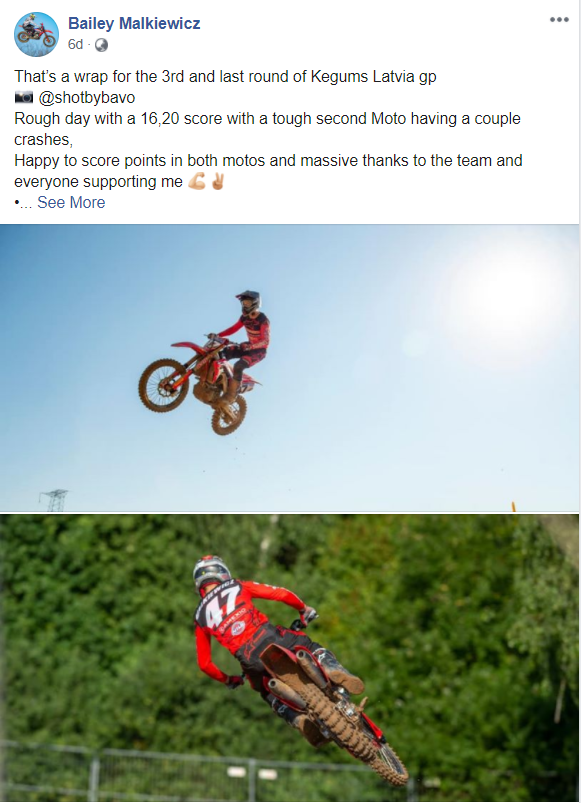 Jed Beaton – struggled in Latvia but was consistently in the top 15, and now sits 5th in the MX2 Championship heading into Italy. 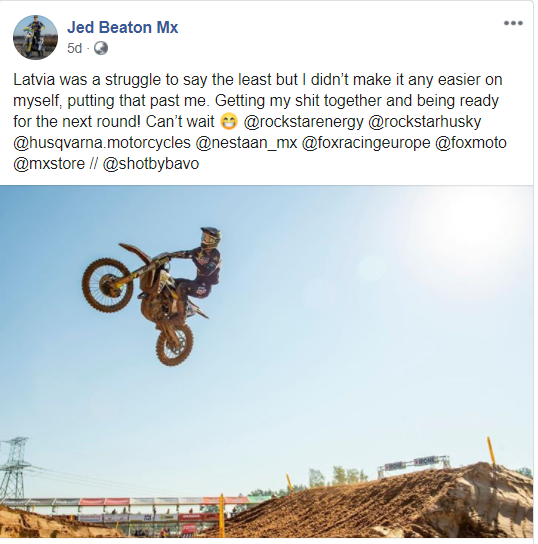 Nathan Crawford – will be glad to move onto Italy after a rough few MX2 Latvia rounds, but sits in 15th on 60 points and will be looking to score some better results and move up in the championship. 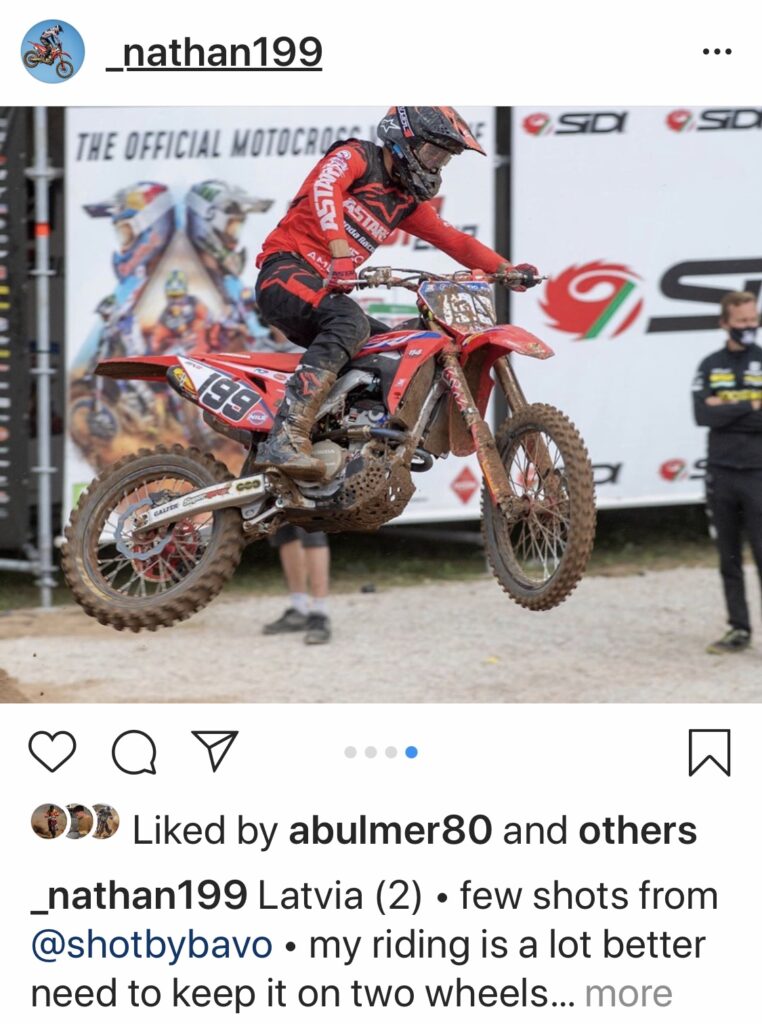 Broc Parkes – while Covid-19 has decimated the championship this year with a number of cancellations, the Australian is looking forward to next month’s 12 hour race at Estoril – September 27, ending the 2019-2020 season. 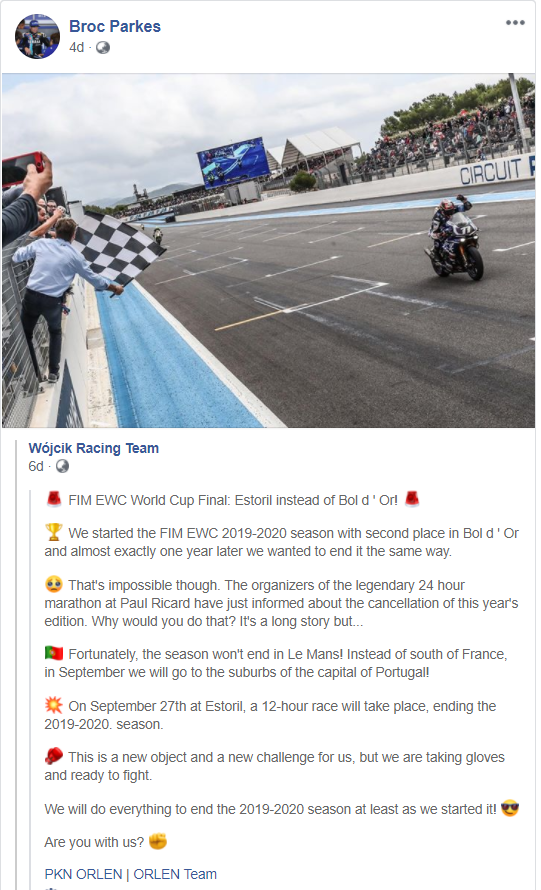 Billy Van Eerde – finished in 8th place in race 1, but suffered a penalty for exceeding track limits and was relegated back to 11th and then suffered a DNF in race two after a high-side. The young Aussie remains positive and is looking forward to the next round. 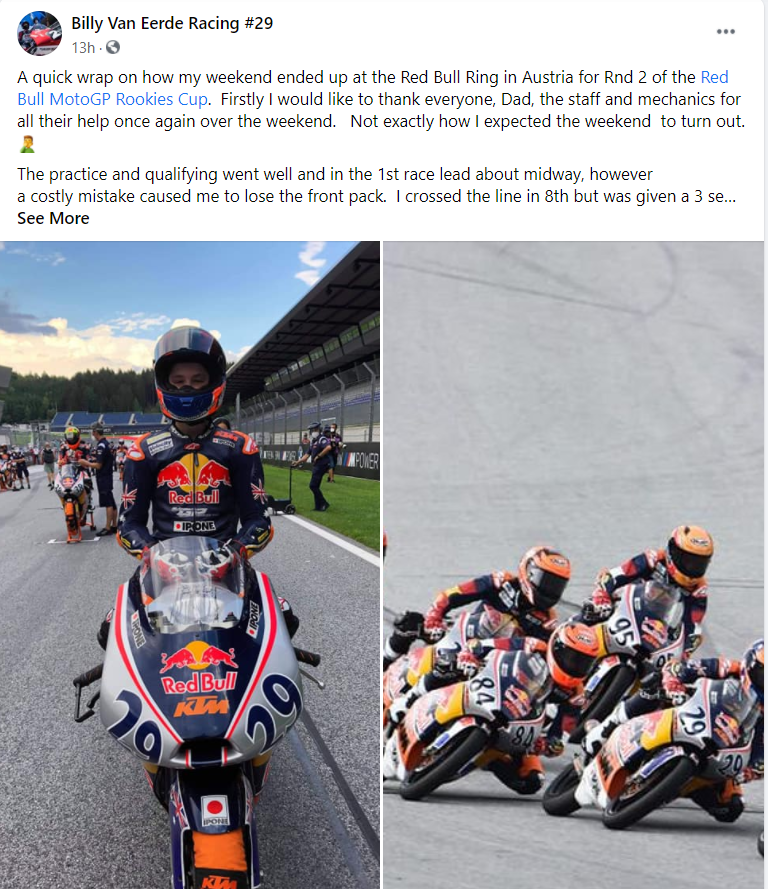 Josh Brookes – scored some solid results including a win in the second round of the BSB Superbikes Championship and now sits in fourth in the championship only 22 points behind the leader. 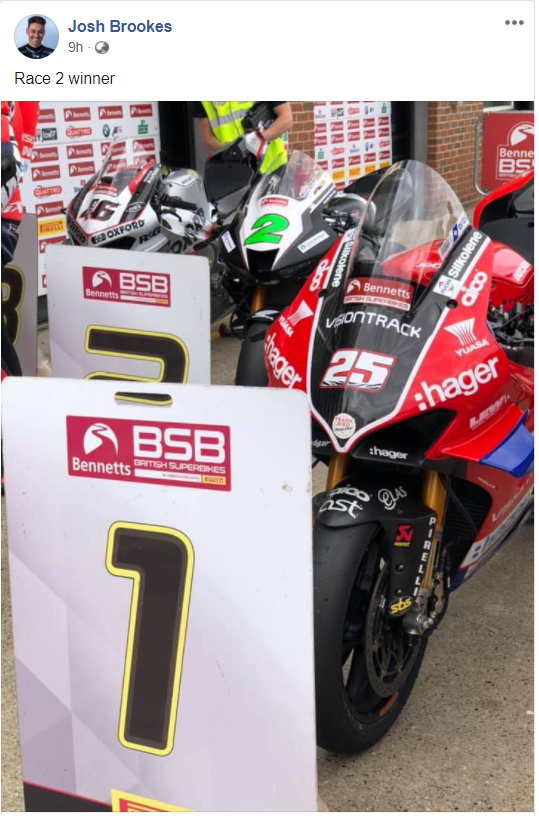 Jason O’Halloran – sits behind Brookes in 5th place in the Championship having scored a 7th and two 8th placings on the weekend. 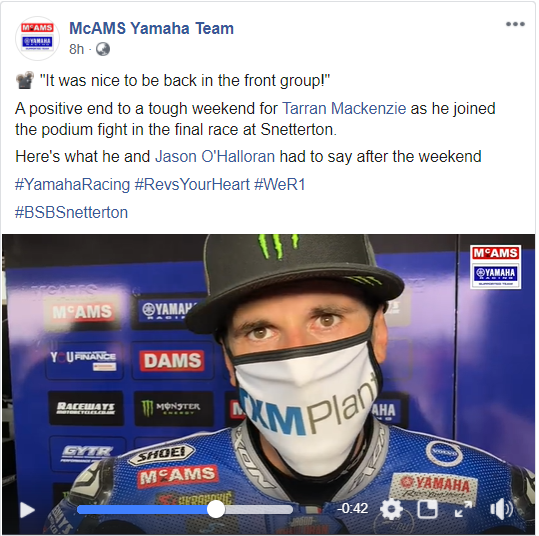 Ben Currie –  Had a difficult weekend, scoring a 6th in race one and unfortunately while chasing a podium position lost the front end crashing out in race 2. 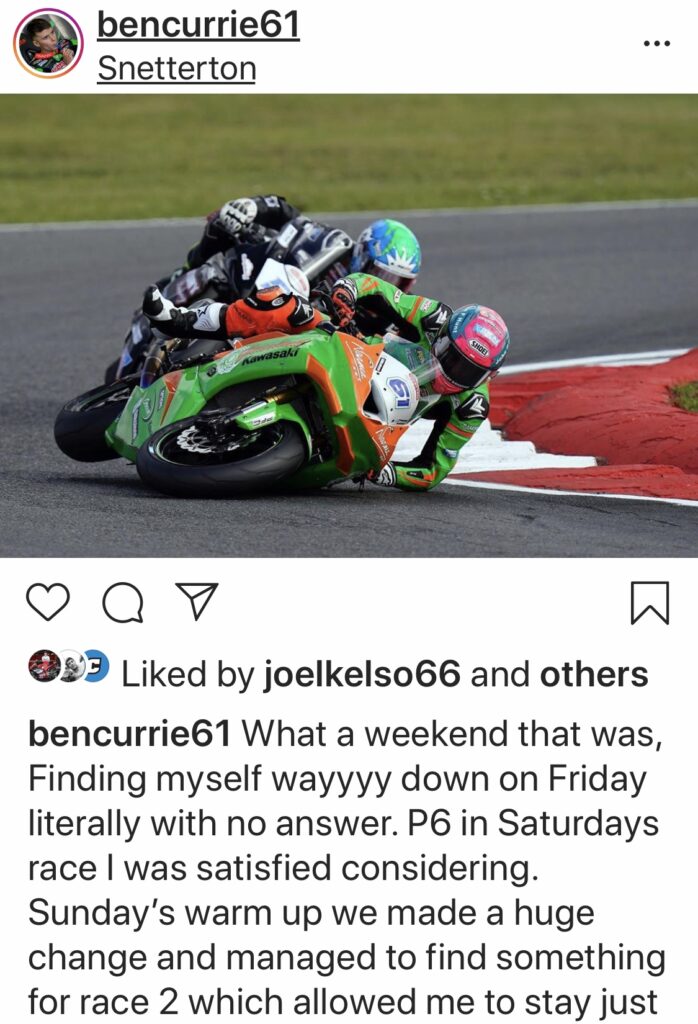 Brayden Elliott – is happy with the progress he is making in the Superstock 1000 Championship scoring some valuable points finishing in 14th. 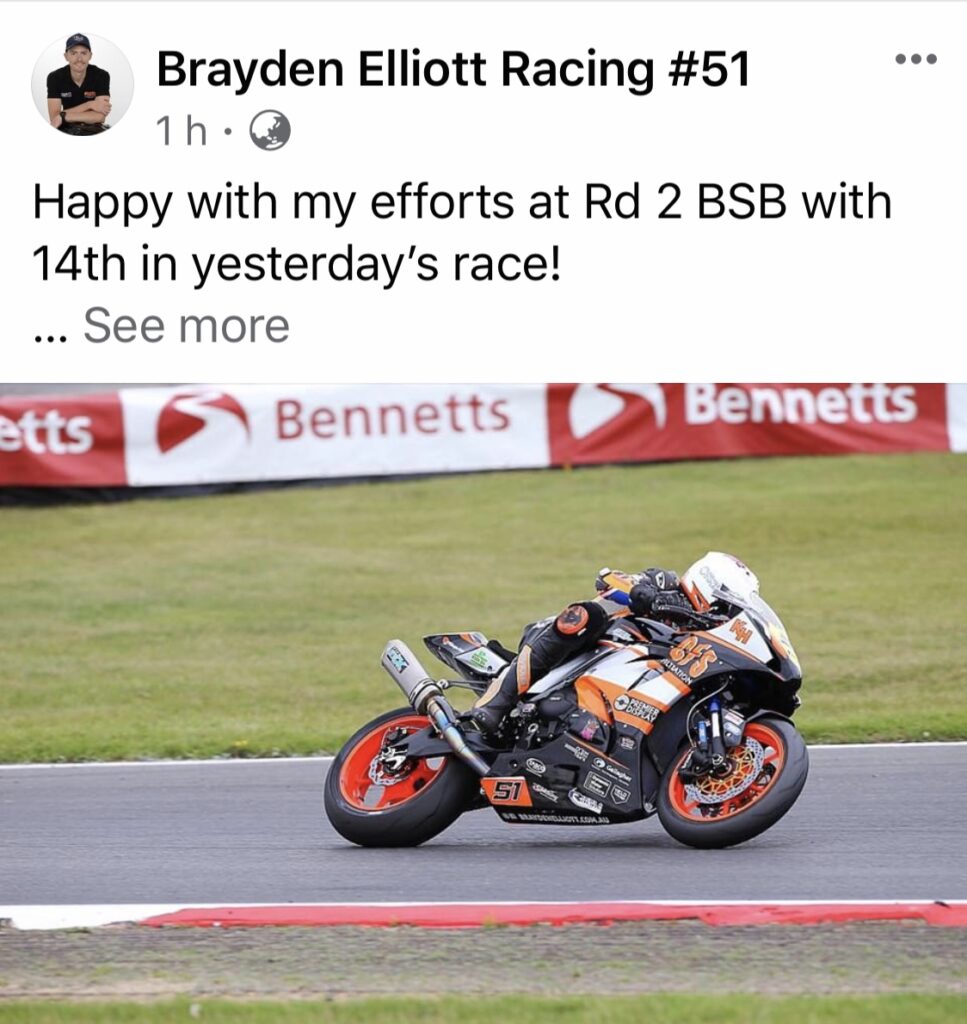 Billy McConnell – now sits in 4th in the Superstock 1000 Championship after scoring a 3rd place on the weekend. 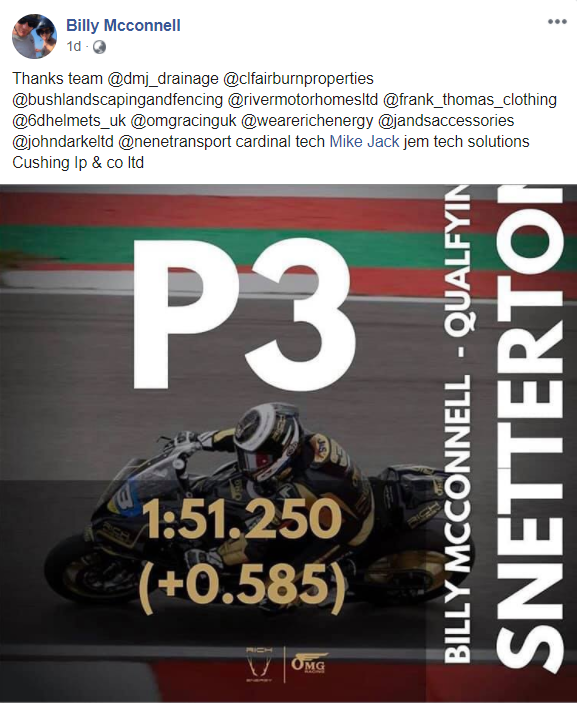 Levi Day – continues his sensational form scoring 2 second places in the TriOptions Cup on the weekend celebrating with his son Max on the podium. 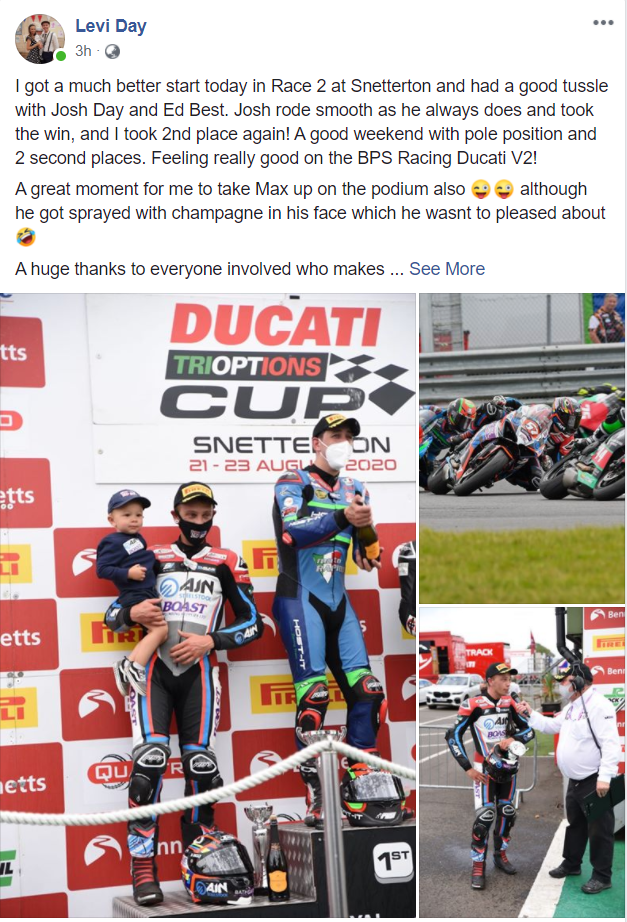 Seth Crump – Continues to impress in the Junior Supersport class scoring a 2nd and 5th placing over the weekend, now sitting second in the Championship. 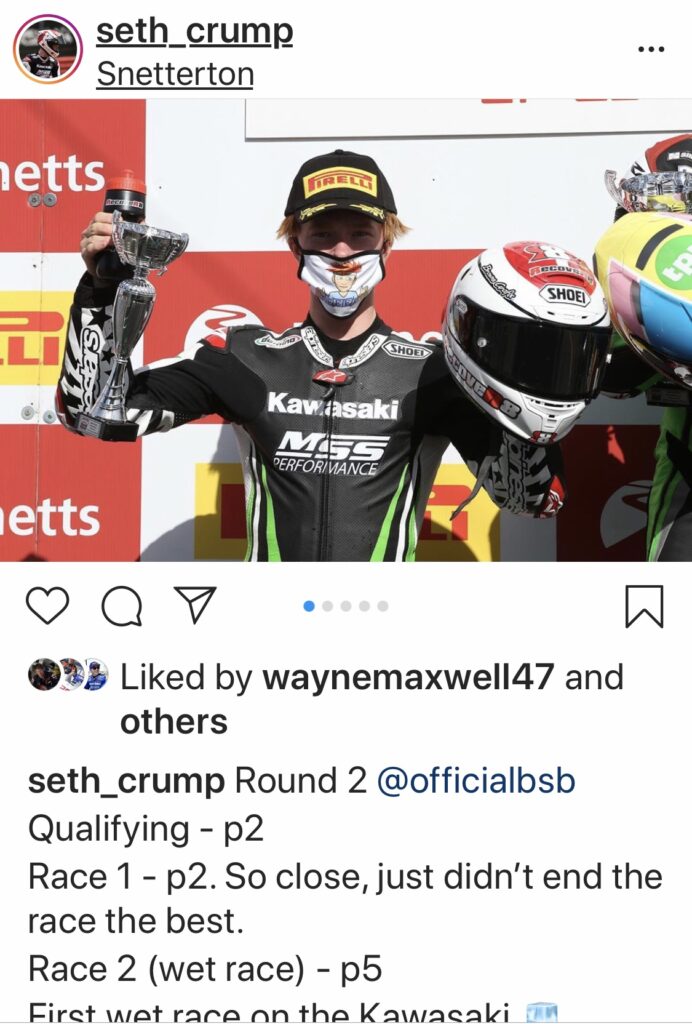 Mackenzie Tricker – continued her sensational season taking another win on the weekend in the Women’s Elite class at the NEPG Enduro in the USA. Mackenzie now has a 56 point lead in the Championship. 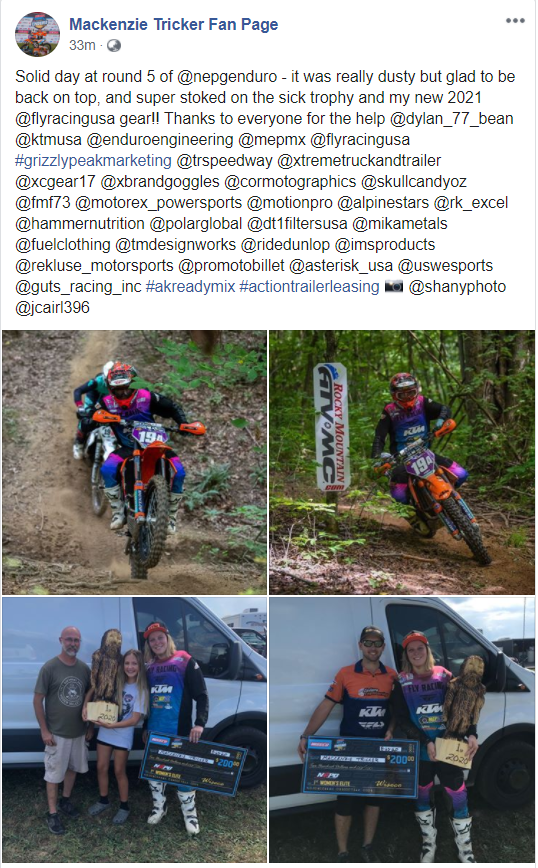 Jett Lawrence – had a weekend to forget in the muddy conditions at Loretta Lynn’s Ranch during the USA pro motocross 250 class.

Max Whale –  finished 7th in the semi-final and 11th in the main of the American Flat Track Singles Championship at Indianapolis. 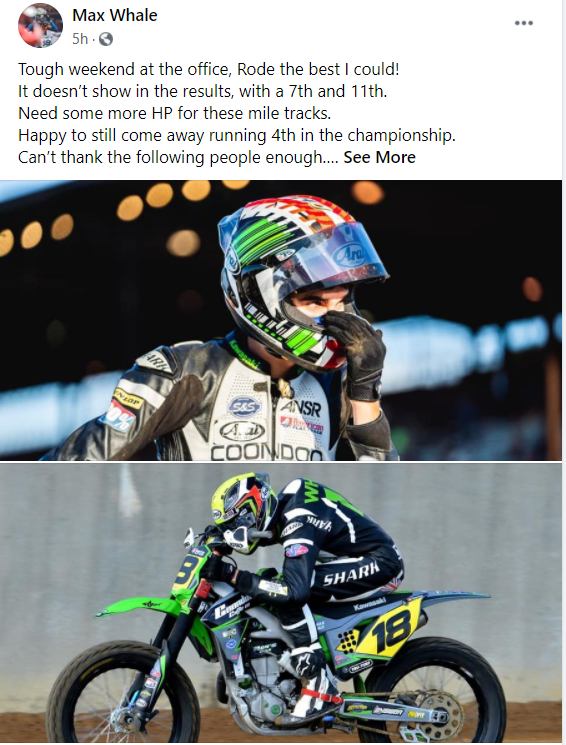 Max Fricke – is eager for the SGP series to get under way. 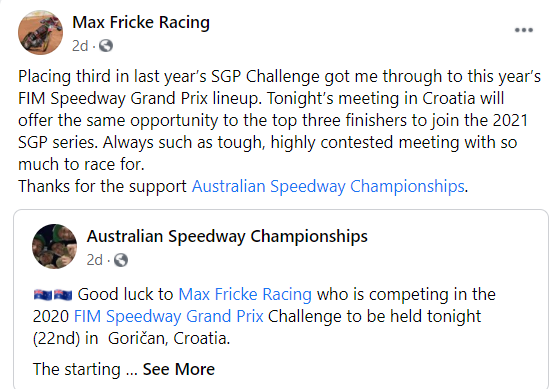 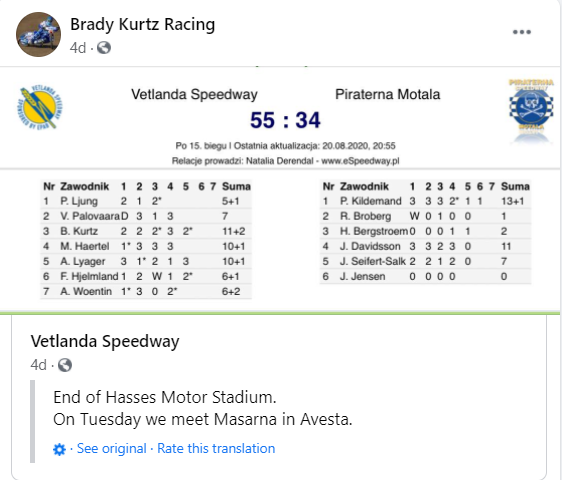 Chris Holder – continues to build his points tally for the season with another good meet under his belt.

Jack Holder – Is having a great season wracking up the points with ease. 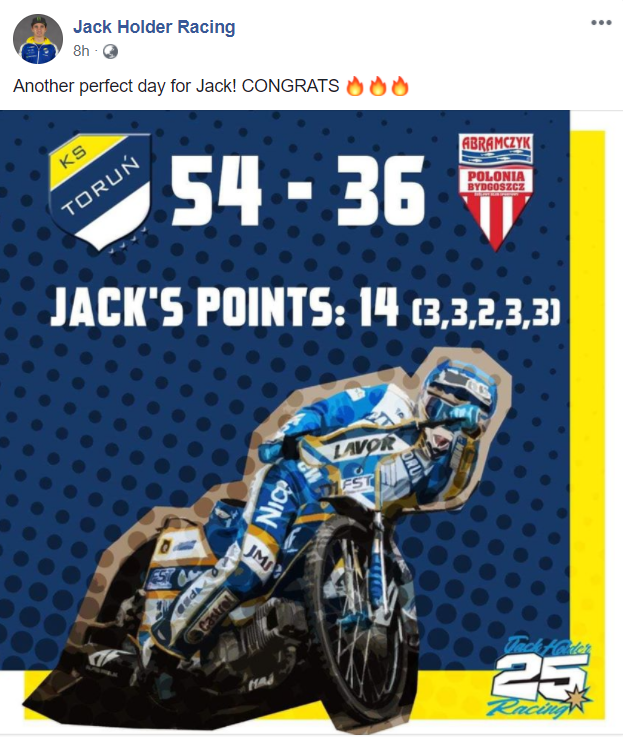 Jaimon Lidsey – is having a solid season with Unia Leszno who are in good form. 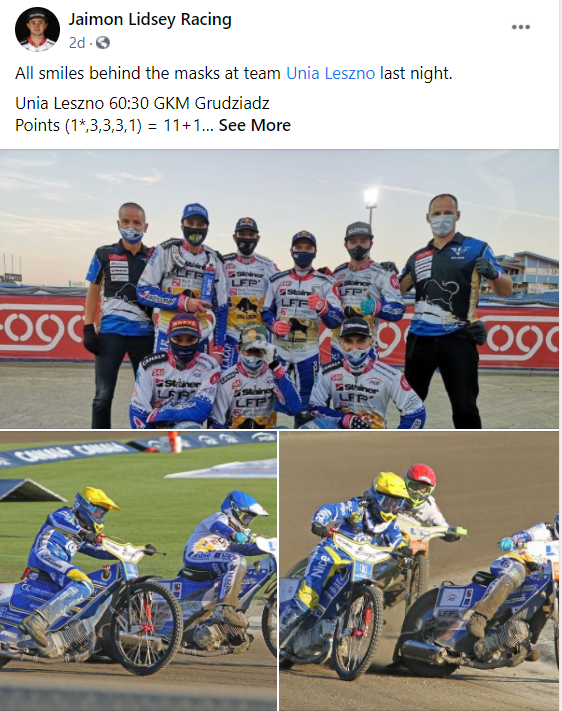 Josh Pickering – is back on track and scored some valuable points for his team in Hungary. 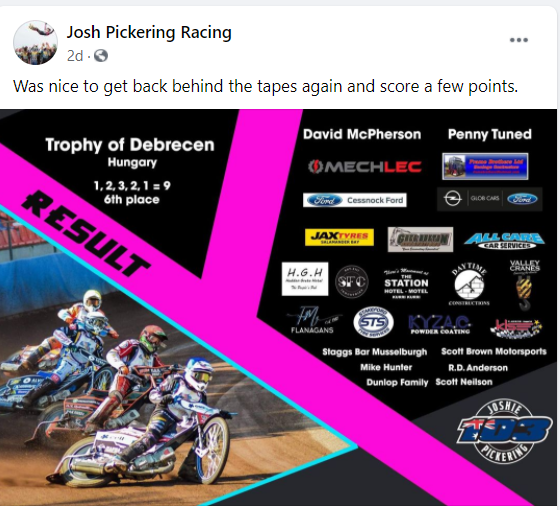 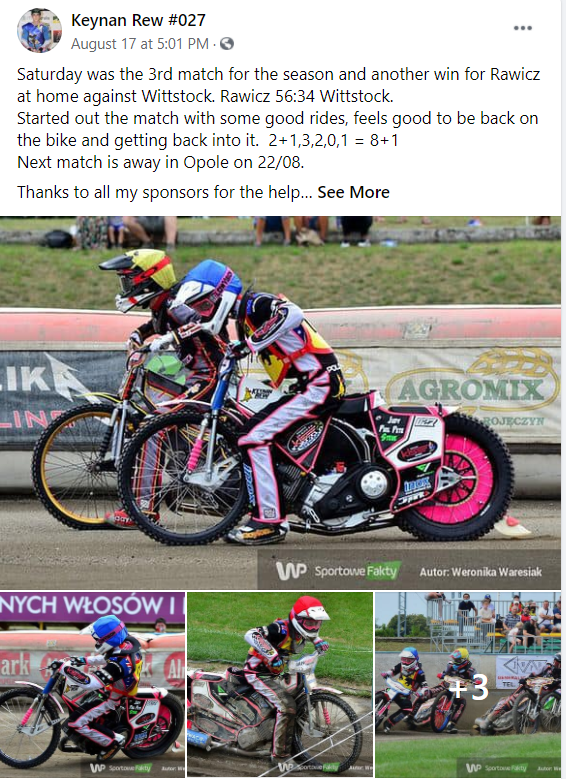 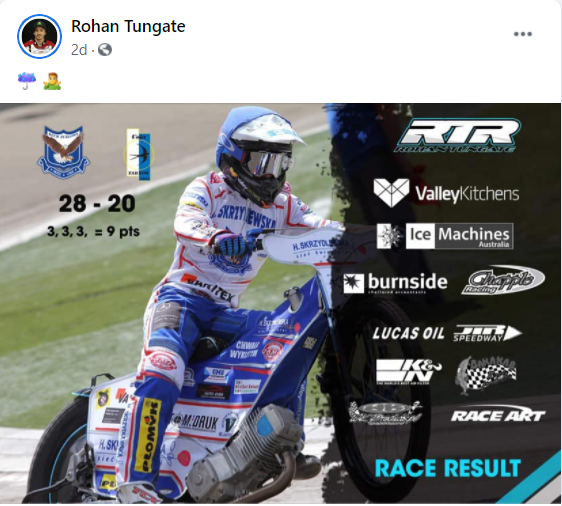 Sam Masters – is having a good season in Poland scoring good results for his team. 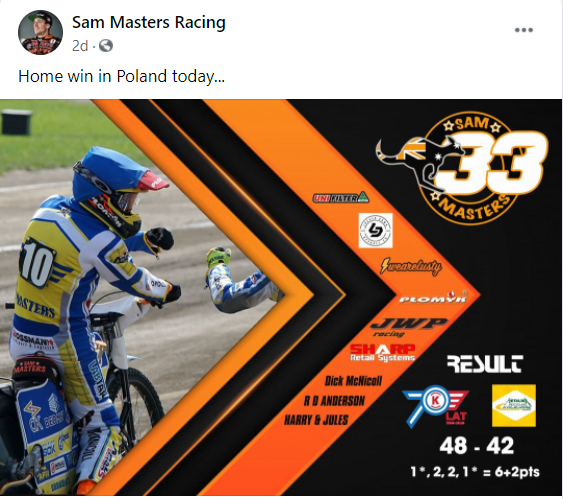