Motorcycle racing competition is slowly returning overseas with many Australian riders already on track practicing and competing against the best in the world.

International competition has recommenced in Europe and the USA and Australia is well represented on the dirt and the tarmac with Aussies competing in speedway, road racing, flat track and motocross.

While the speedway season was able to get under way in Poland with a number of Aussie riders on track, it is not such good news for our Aussie riders in the UK with the season cancelled.

Jaimon Lidsey is excited to get back on the bike next weekend in Poland. 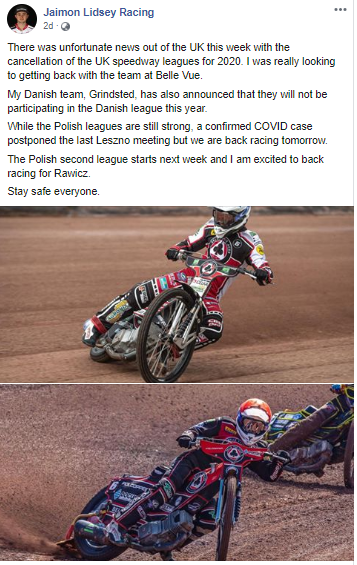 Zane Keleher’s season may have been cut short in the UK but he is currently working on plans to get back on track in 2020. 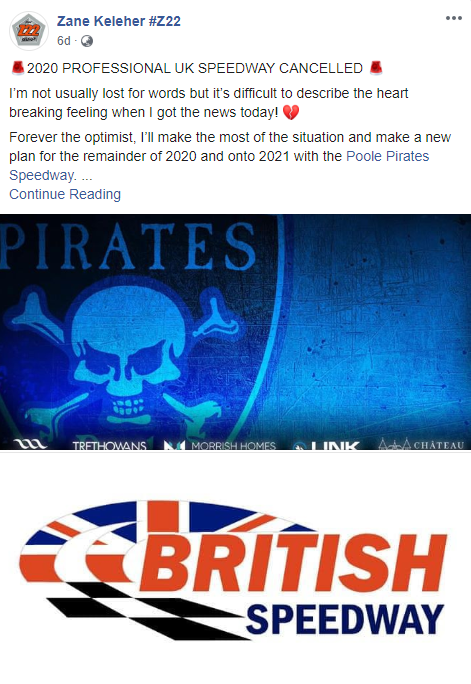 Jack Holder has had a great start to his season in Poland scoring good results on track. 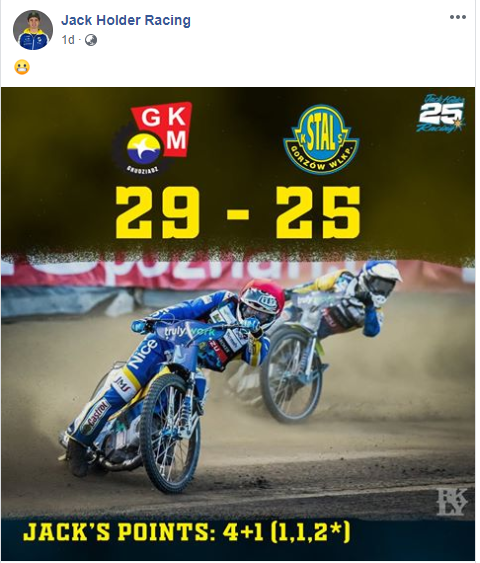 Brady kurtz may be disappointed that the British season isn’t going ahead, be he still has plans for 2020 competing with KŻ Orzeł Łódź in Poland. 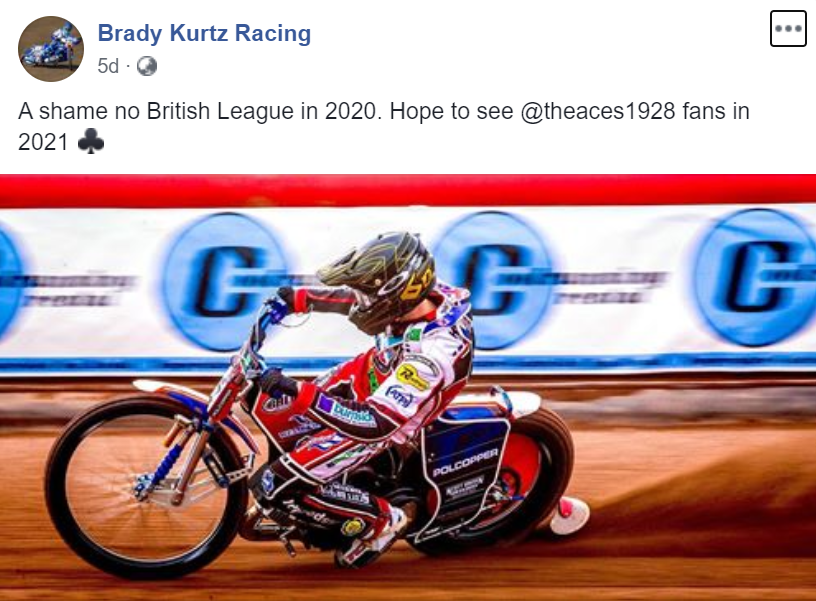 Keynan Rew kickstarts his season this weekend in Poland with Metalika Recycling Kolejarz Rawicz and will be  one to watch. 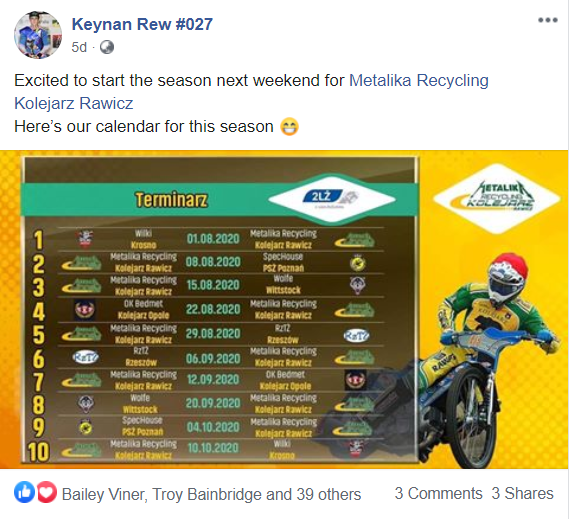 Rohan Tungate is continuing to score solid results in Europe as he builds momentum in season 2020. 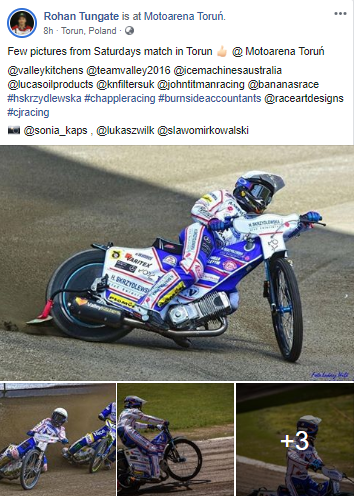 Max Fricke having been in Poland racing, has confirmed he will be in riding in Kumla, Sweden for 2020 and 2021. 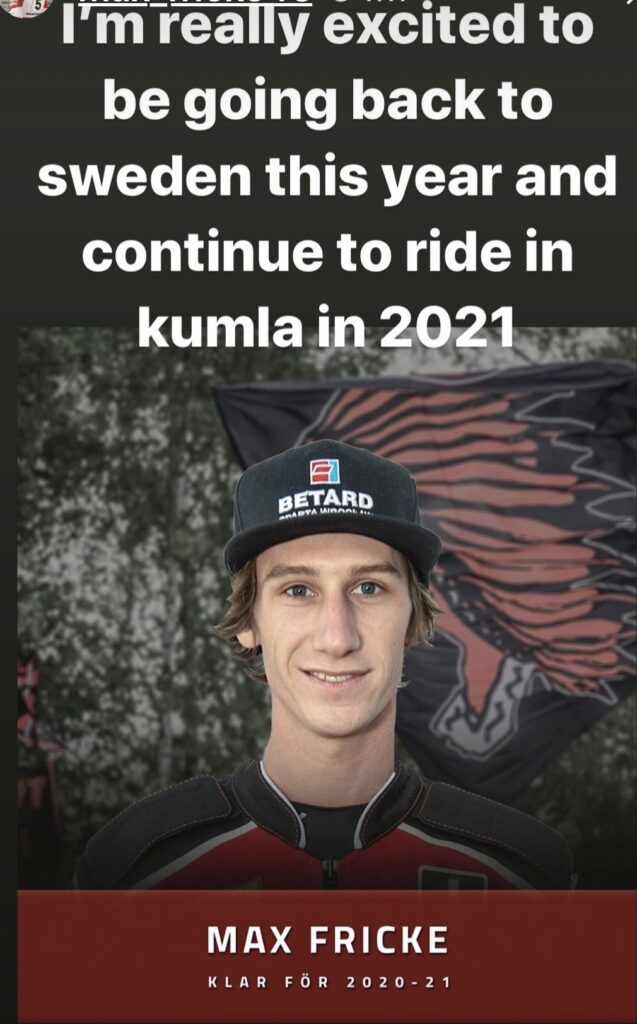 For the past fortnight Australian’s have had plenty to cheer about in MotoGP with Australians Jack Miller, Remy Gardner and Josh Hook back on track and competitive, despite the blistering heat.

Jack Miller – Despite a crash last weekend, Miller is still in championship fight sitting in 7th and looking very competitive on the Ducati. 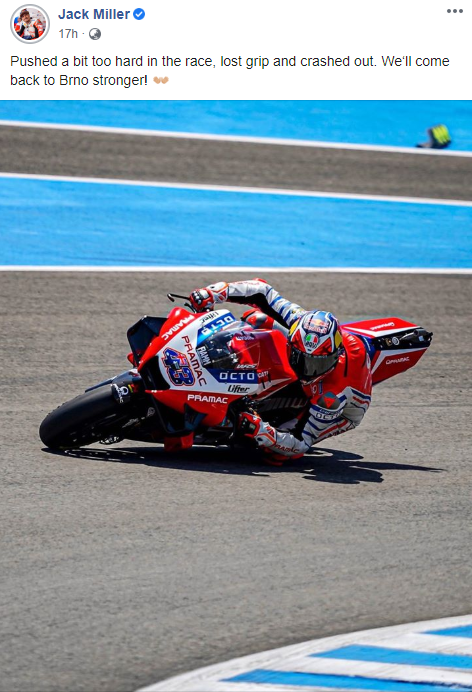 Remy Gardner – While not where he wanted to be, Gardner scored valuable points in both Moto2 races sitting in 8th and will be keen for a podium finish at the next round. 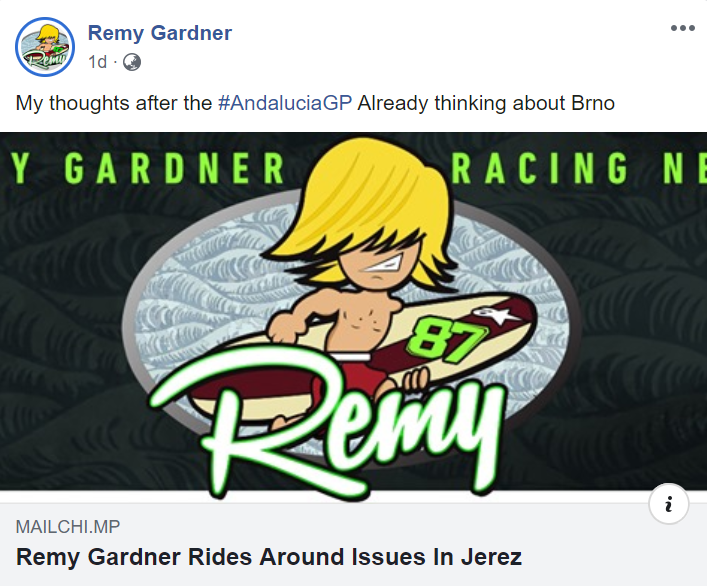 Josh Hook – In the MotoE class Josh sits tied in 7th place in the Championship after some very tough racing conditions. 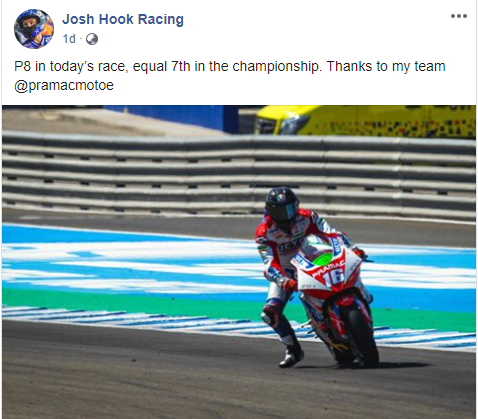 Lachlan Epis has joined MPM Routz Racing Team aboard a Yamaha R6 and races this weekend in Jerez in the WorldSSP class. 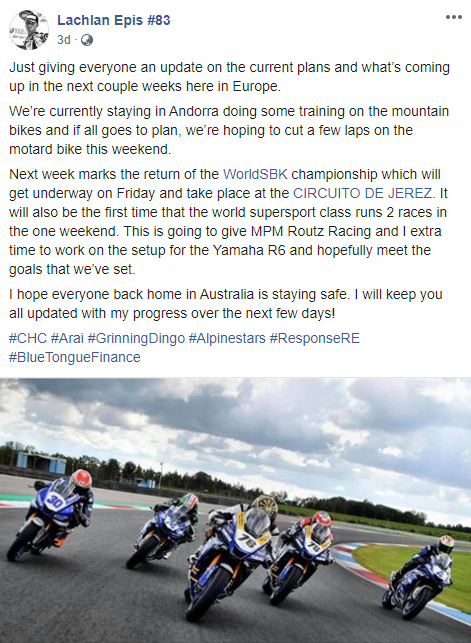 Australian fans have plenty to watch this weekend in Jerez in the WorldSSP 300 class with former ASBK riders Tom Edwards and Tom Bramich taking on the best in the world.

Tom Edwards has been in Europe for a while now training hard and can’t wait to hit the track this weekend. 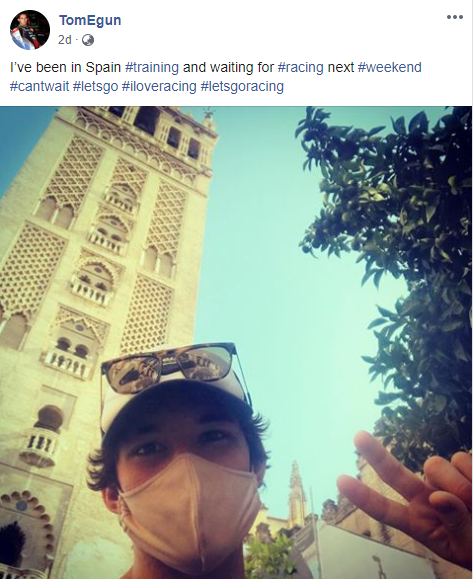 Tom Bramich started a two day test today in Cartagena and is confident going into Jerez this weekend. 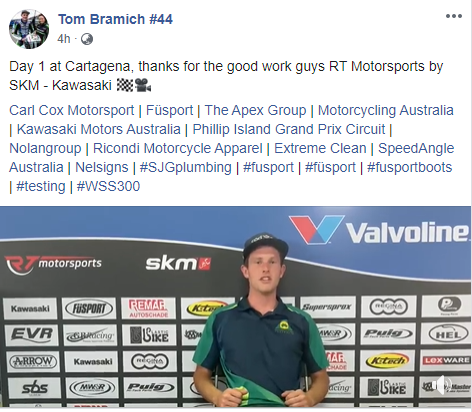 Sharni Pinfold having only arrived in Misano days before racing commenced last weekend, sits in 13th after a solid hit out and will be looking to improve when the championship heads to Imola in September. 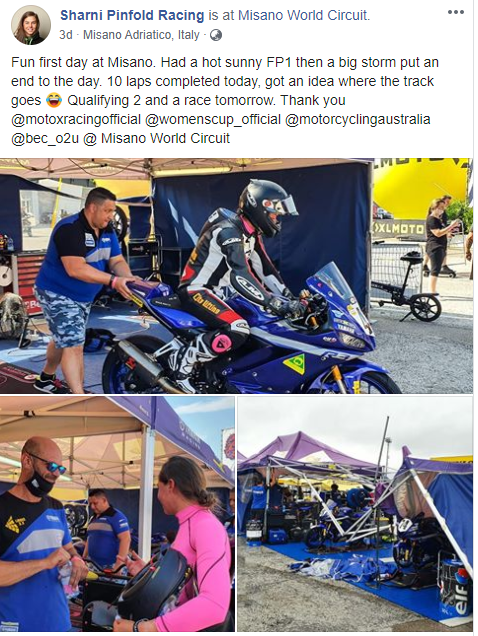 Grace Poutch unfortunately had an off in race one but salvaged some valuable points for the weekend and sits in 15th heading into Imola where she will no doubt make some improvements. 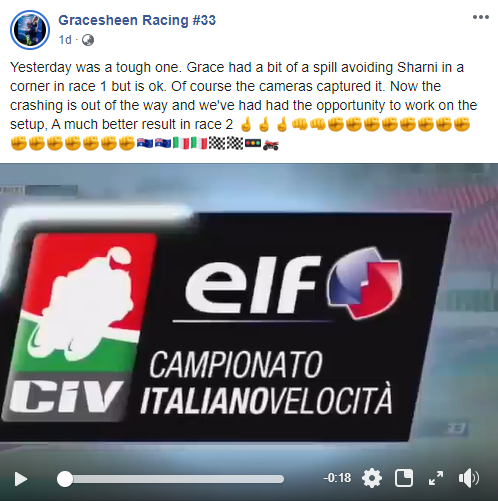 Joel Kelso with a new team in 2020 has had difficult start to his season but is happy with his progress and looking forward to the rest of the Championship. 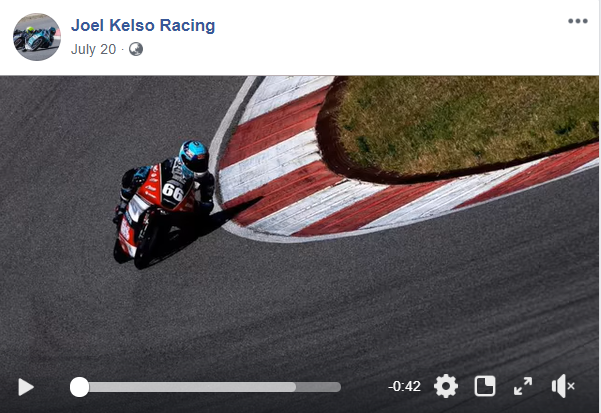 Senna Agius had a tough start to the season tangling with other riders which hampered his progression but is heading in the right direction for the rest of the championship. 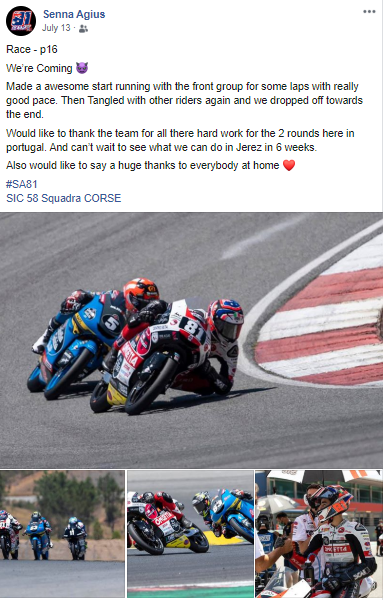 Harrison Voight has had a positive start to the season battling with the front runners and is keen to make some improvements to continue his championship run. 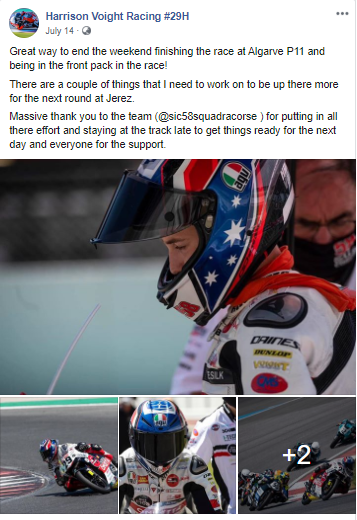 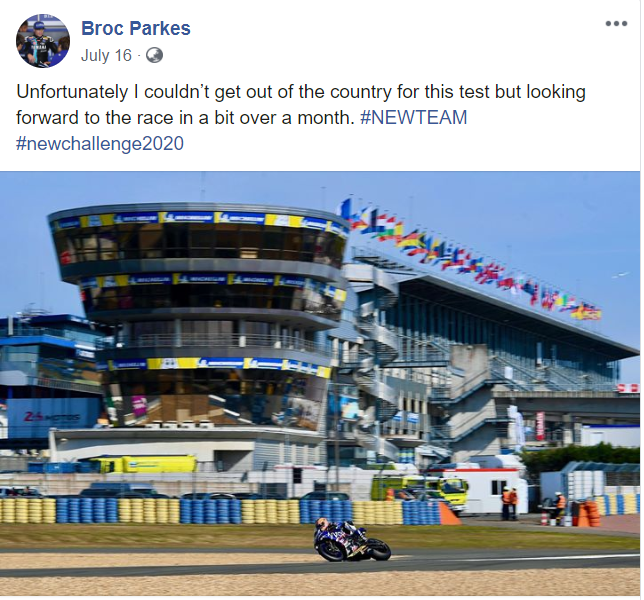 Levi Day has had a solid hit out at Donnington as part of the official BSB Test on a Yamaha R6, as the Ducati class didn’t run at the test. 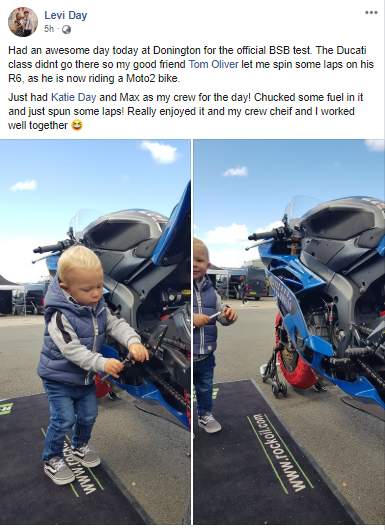 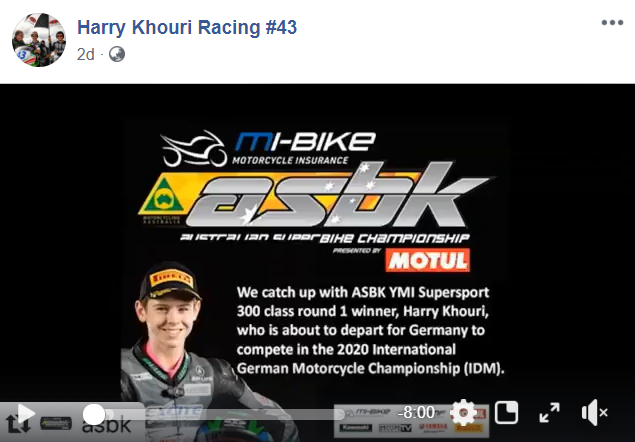 Max Whale took victory at round one of the American Flat Track double header in Florida recently in the perfect start to his season. 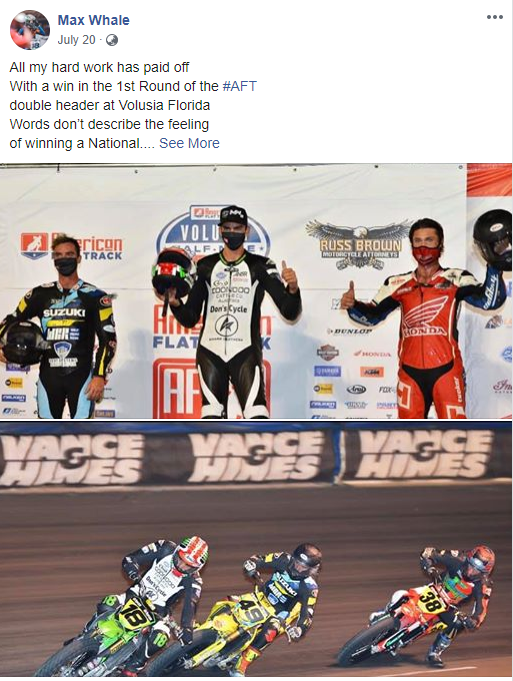 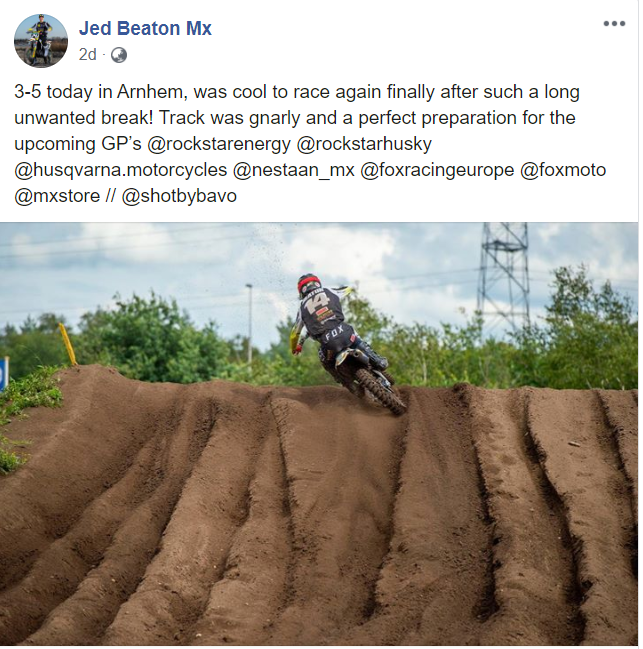