Gardiner Ploughs Ahead For Her 6th A4DE Win

You are here: Home / News / Gardiner Ploughs Ahead For Her 6th A4DE Win
Back 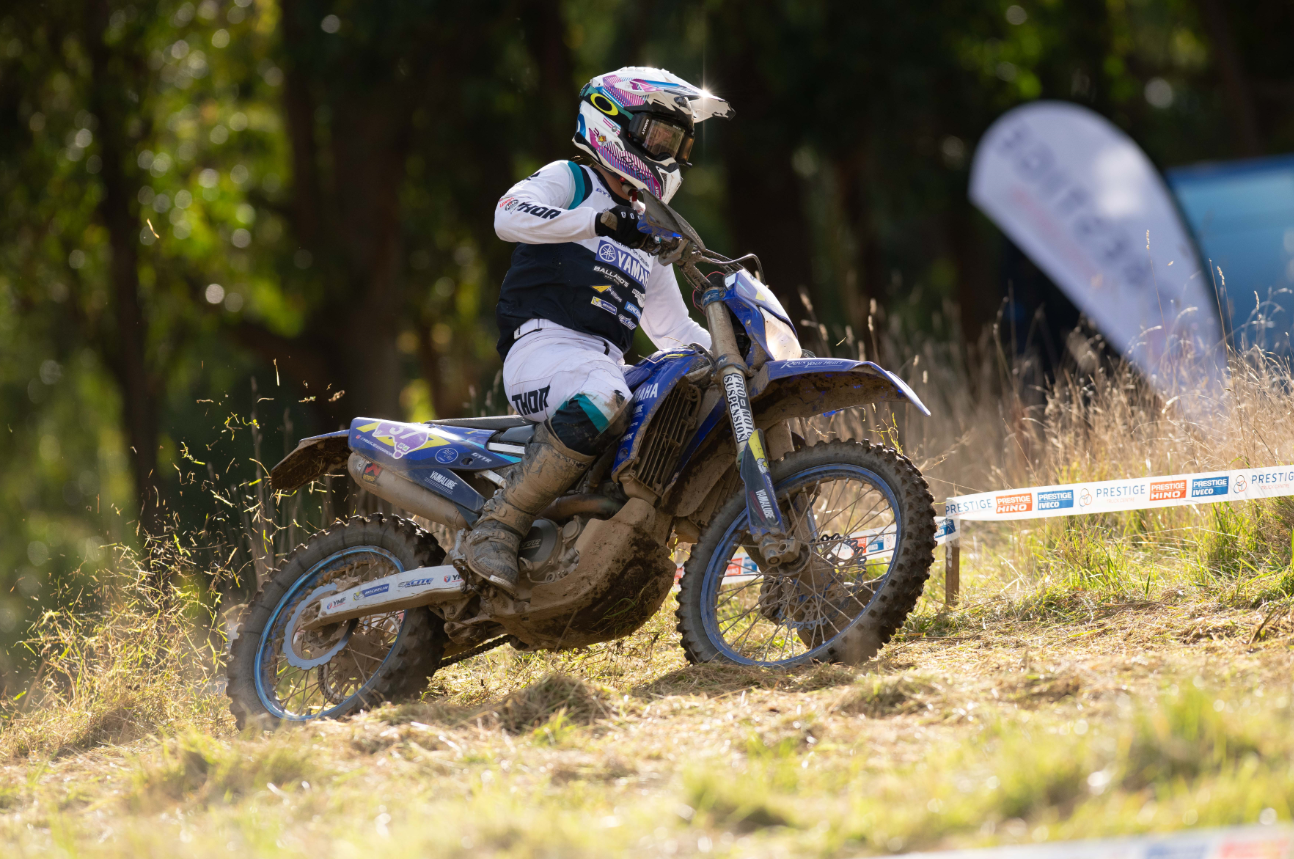 The stage was set here in Erica and against all odds, the weather held out for one spectacular final day of the 2022 Prestige Iveco Australian Four Day Enduro (A4DE). Day 4 featured one final trail ride followed by an exciting five lap Final Moto. 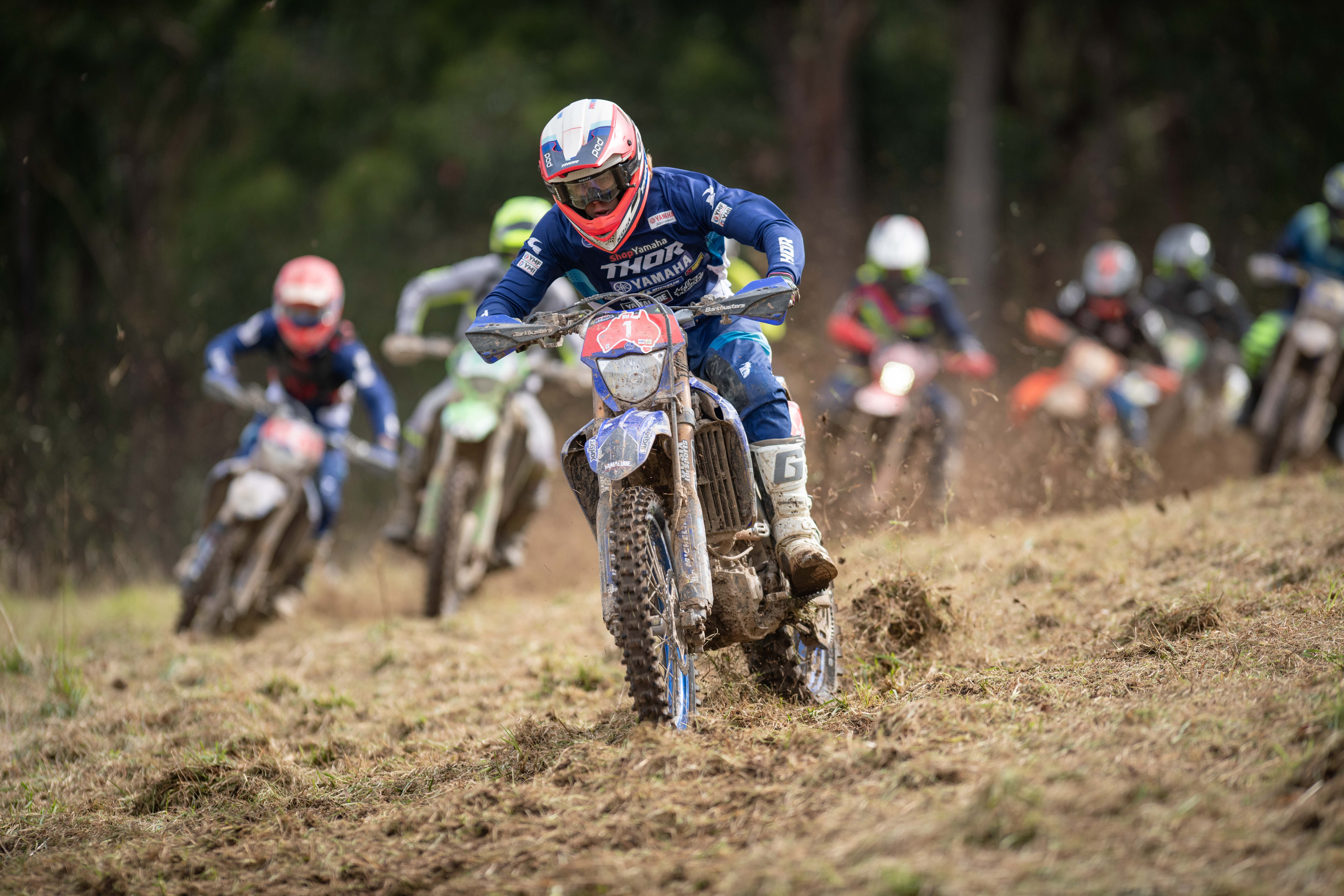 E1
It was Bacon’s time to shine, as he screamed across the Final Moto. With a total time of 15:14.491, the Yamaha racer set an extremely strong tone immediately, scoring the holeshot and keeping a strong lead across all five laps.

“I got the holeshot in that race and I’m stoked with the end result,” gushed Bacon.

“It was definitely fun tussling with Cooper [Sheidow]. I would see him out of the corner of my eye and it definitely pushed me on to stay ahead.

“The feeling is unreal [winning the E1 A4DE title]. I didn’t think I’d be here today to be honest. I’ve always watched this event as a kid, so it seems unreal to me, to be here. I can’t wait to see what happens next!”

Filling out the remaining E1 podium after four days is Cooper Sheidow (Kessner Motorcycles, KTM) and Jeremy Carpentier (Yamaha JGR Ballard’s Off Road Team), with respective times of 2:34:01.318 and 2:34:32.634. Contrastingly though, it was Sheidow and Blake Hollis who claimed the silver and bronze in the Final Moto, knocking Carpentier down to fourth. 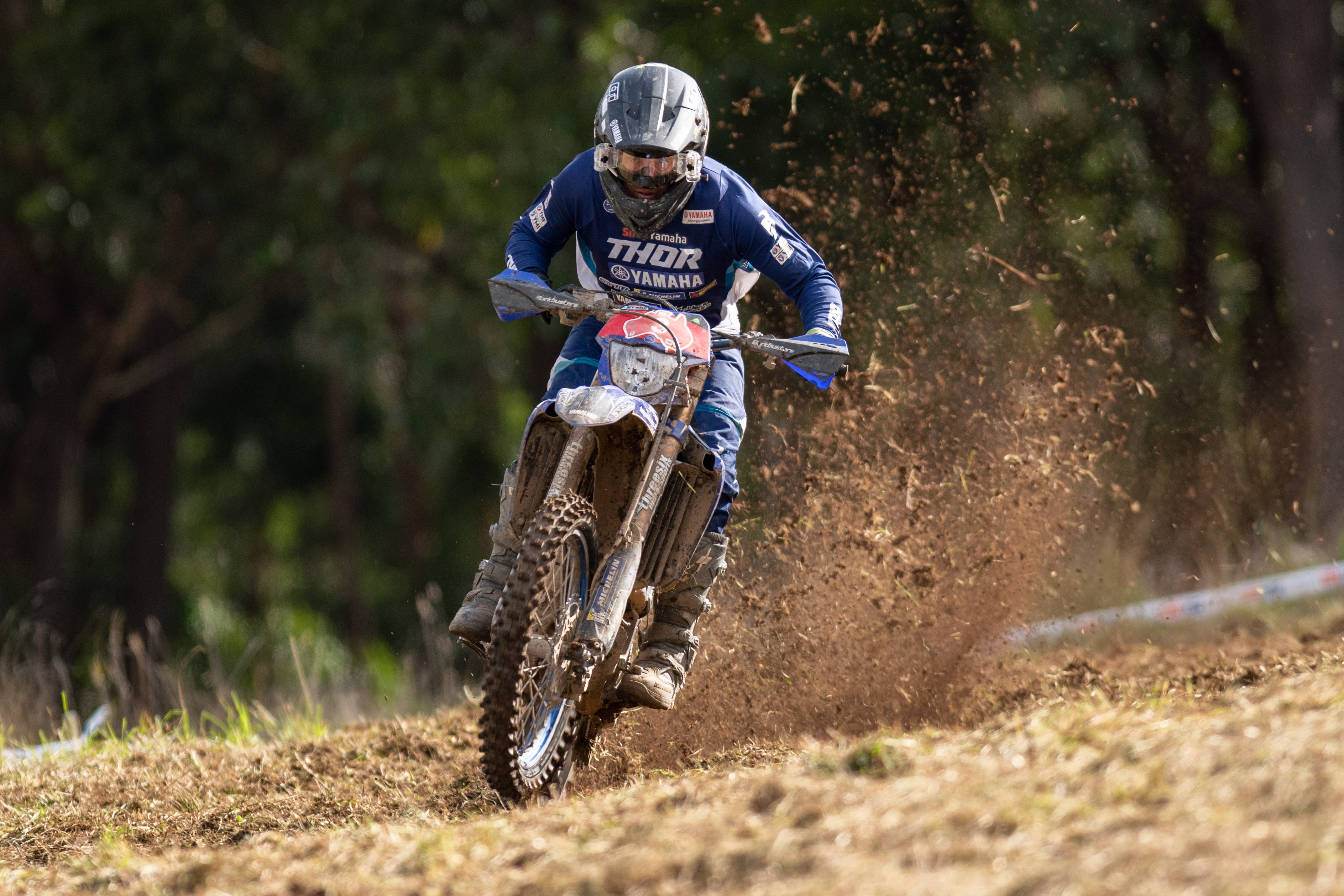 E2
He had some challenges throughout the event, especially yesterday in Day 3 after losing to Waters. After all that though, the E2 A4DE title was won by Green with nearly a minute to spare! The Yamaha racer has solidified a place in every fans heart, after earning a hard fought title with a total time of 2:31:34.604.

“I’m pretty relieved to finish off Day 4. It was hard work,” explained Green.

“I got a good start and the holeshot [in the Final Moto]! I was about two laps in and thought to myself ‘wow, that red plate holder is on my back wheel’. It was an awesome weekend – challenging, slippery and hard to race.

“I had a few mistakes this event, so we’ll go back to the drawing board and learn from it.

“I’m super stoked to be racing Toddy [Waters], we have great banter and I love it.”

Waters took home an impressive second place win overall in E2, demonstrating how versatile his skill set is in both Motocross and Enduro. Waters also won the Final Moto with a total time of 15:08.634, beating Green by nearly six seconds.

Beta’s Fraser Higlett stole third place overall, just behind Waters with a total time of 2:35:58.657. With a result like that, it bodes well for Higlett’s remaining Enduro 2022 racing season. 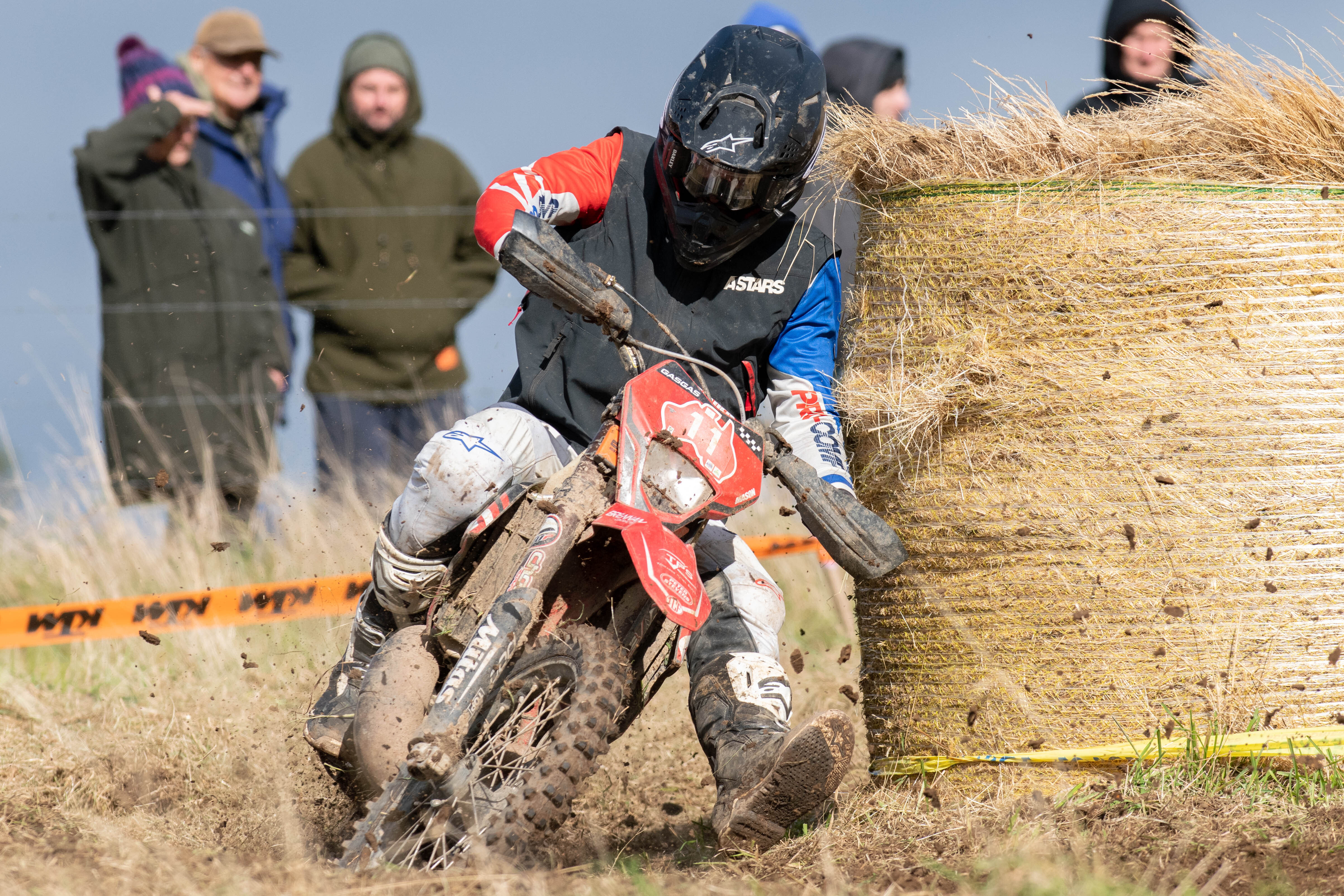 E3
After years away from racing, Mason came back with a fire in his belly and it well and truly paid off! Winning the 2022 E3 title, Mason has demonstrated his undeniable skills on his Gas Gas, clocking in a total time over four days of 2:32:27.991.

“I feel relieved that I can put this A4DE in the books,” confirmed Mason.

“Today was good – I had a bit of a scare before the Final Moto, where my kickstarter broke just before the race. But we got it sorted and this event has reflected my best results.

“I didn’t know what to expect coming into the event. I was aiming for a top 10 finish and to get in the top five after time off is a great confidence boost.”

Even with a penalty, Wilksch finished Day 4 with an extremely impressive result. Claiming the Final Moto win in E3 with a total time of 15:21.505, the Husqvarna boarded rider put on a spectacular show for fans, as he tussled with Mason for the gold. Wilksch also walks away from Erica with a second place win overall in E3.

KTM’s Stefan Granquist protected his third place position in E3 overall and in the Final Moto, finishing the A4DE with a total time of 2:34:05.969. 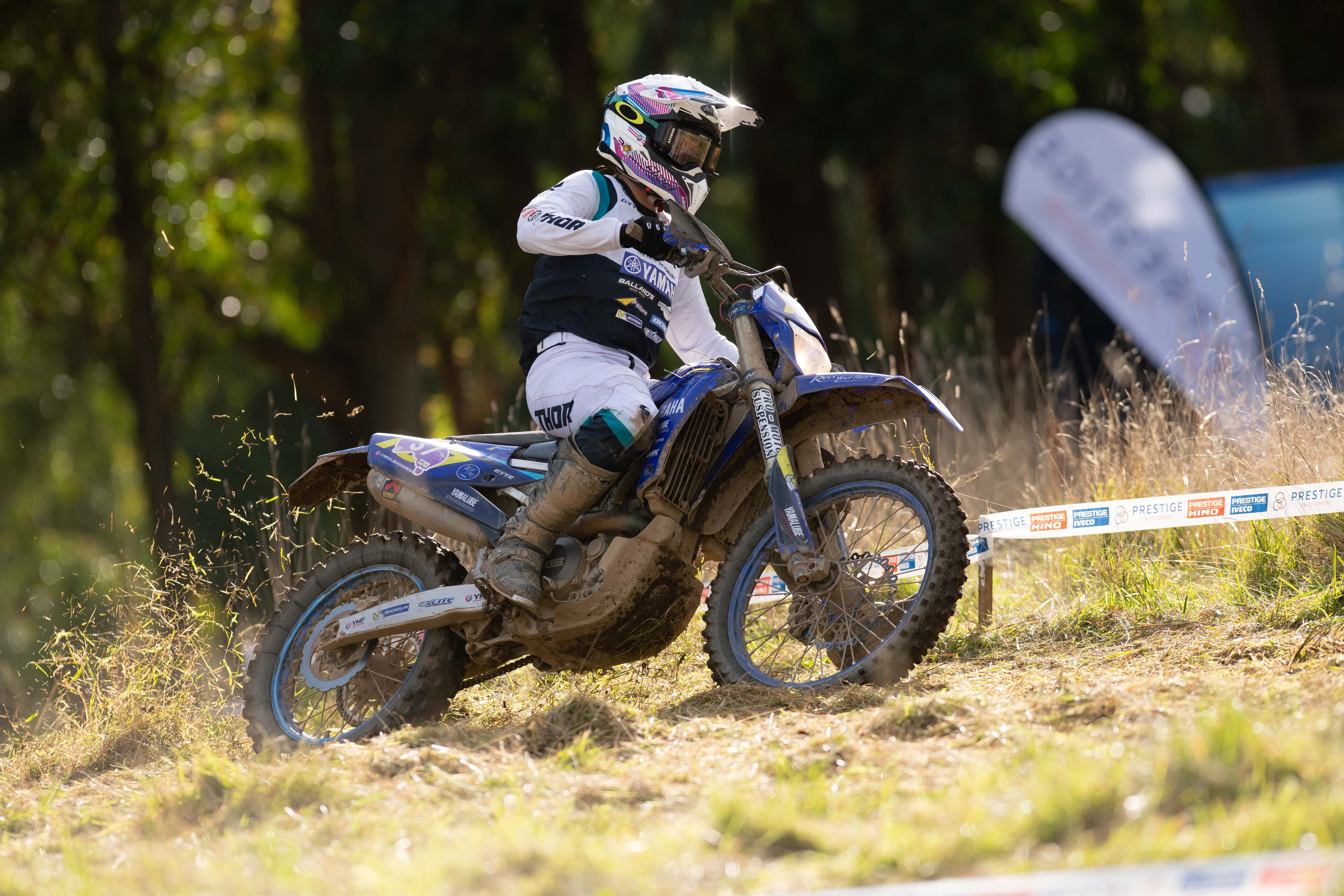 Women
She’s seemingly unstoppable! Gardiner took home her 6th A4DE Women’s title today, after smoking the competition in the Final Moto. With a total time of 17:18.835, Gardiner demonstrated her prowess both in the tight and technical, as well as on the open straight.

Looking back on her fantastic four days here in Erica, Gardiner confirmed that “I feel ecstatic to earn my sixth title!”

“I was nervous going into the Final Moto. Everyone is watching and your body is tired, but you need to put on a show and demonstrate your riding style.

“The start was exhilarating, where I needed to keep ahead of Emelie who’s on a bigger bike. I was lucky to get that holeshot and it set me up well for the rest of the rest.

“Winning definitely doesn’t get old! I’m so thrilled with this result.”

KTM’s Emelie Karlsson finished Day 4 with a fantastic result of second place! Navigating tough conditions and long hours on the bike, Karlsson earnt both second place in the Final Moto and in the overall Women’s class.

Last but certainly not least, Ebony Nielsen (KTM) claimed third overall after her first ever A4DE! With a humble mindset of staying upright for four days, Nielsen’s end result is a testament to her skillset. 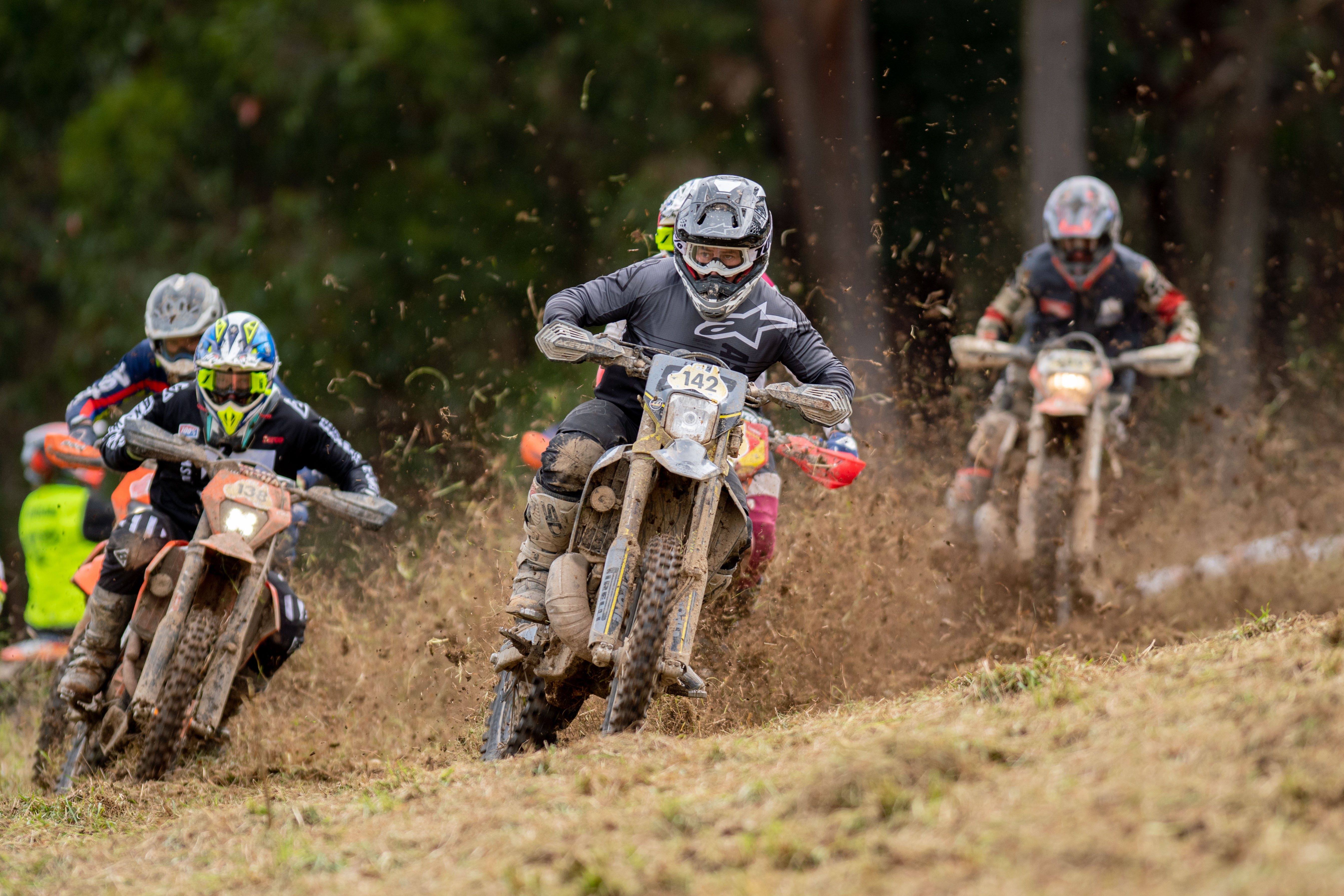 Veteran
Day 3 may have been a struggle for our 2022 Veteran Champ, but Day 4 brought in the rewards for Lloyd! Coming in third in the Final Moto, Lloyd’s steady and consistent times earnt him the 2022 title.

“The conditions have been pretty slick, which is not what I’m used to. It’s hard coming from dry conditions, to tracks that are hard packed and slick. It’s been challenging but my Husqvarna has served me well.”

Richard Chibnall took home second place overall in the Veteran class, finishing four days with a total time of 2:48:53.467. The Final Moto winner was Steven Powell, who finished five laps with a total time of 16:26.167. This fantastic result ensured he went home with a third place finish overall. 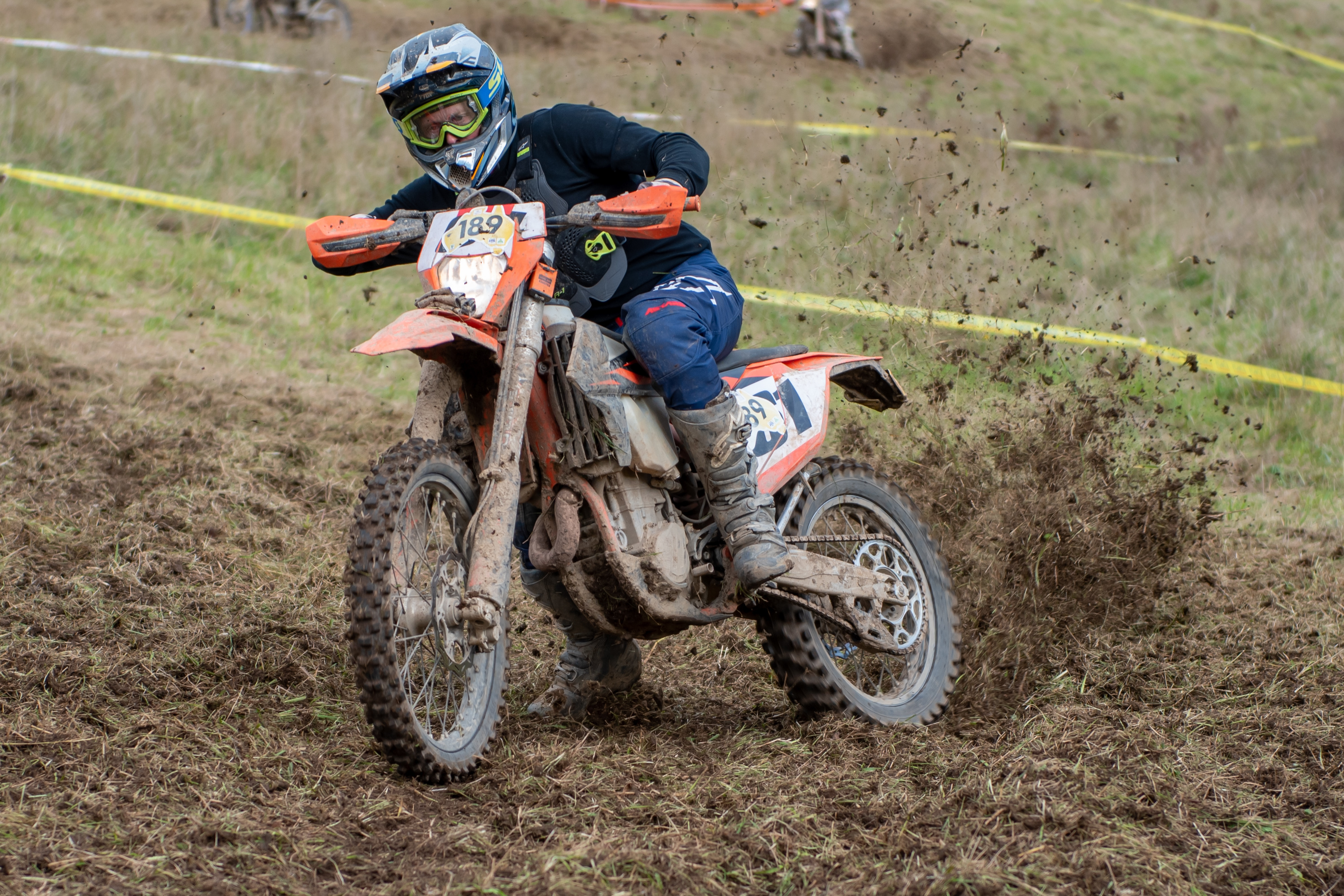 Masters
Over in Masters, Salopayers fought back after a tough Day 3, to win the overall 2022 title! With an overall progressive time of 2:54:57.959, Salopayers set a considerable lead in the class.

“It’s been a great time, great event and even the weather held out! I struggled in the wet, slippery conditions but overall I enjoyed my time here in Erica.”

The Final Moto today was won by Day 3 winner, Jason Haas with a total time of 17:06.563. With the strong lead, Haas also ensured his second place finish overall. 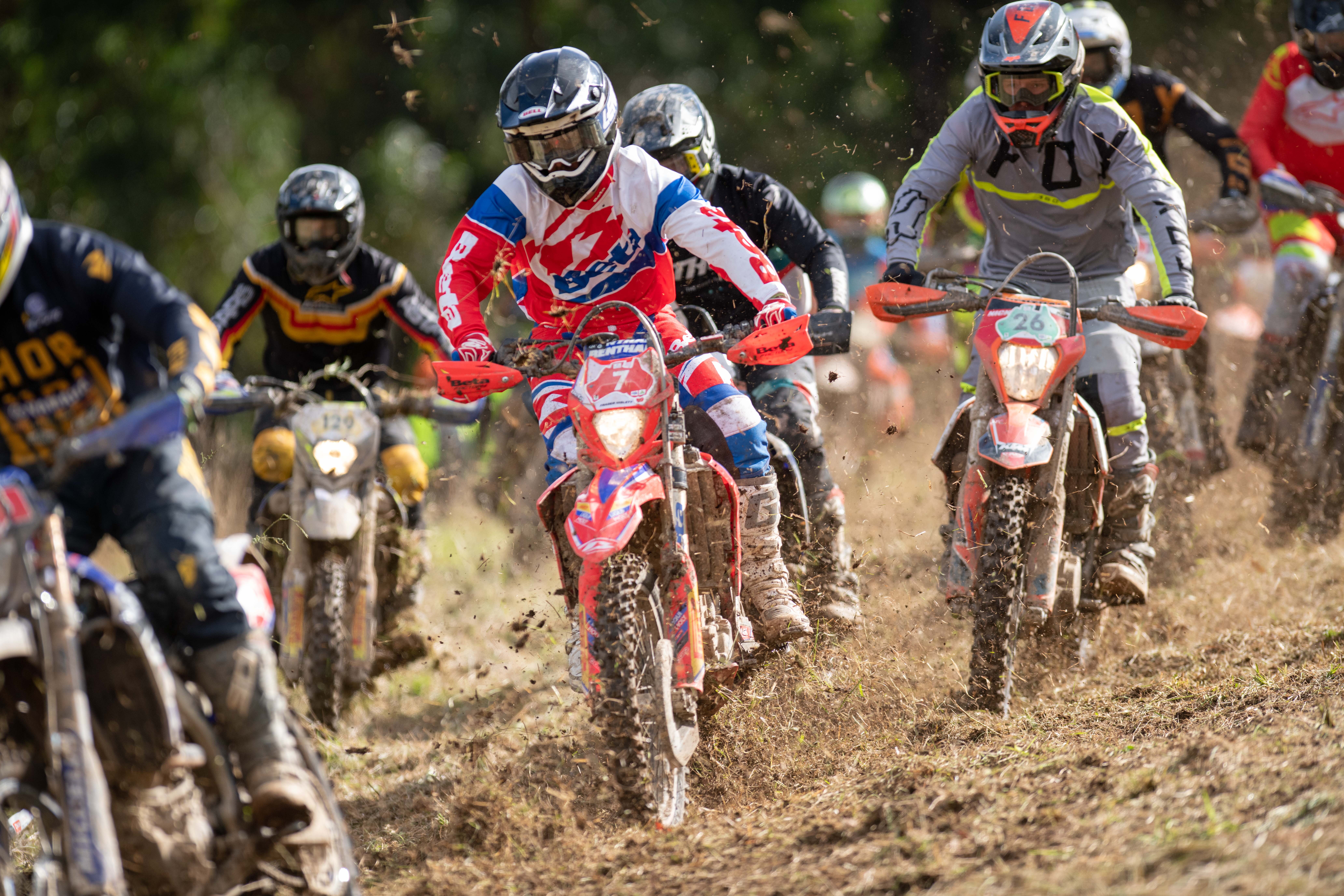 Senior Trophy Team
Queensland (QLD) have taken home the 2022 Challenge Trophy, after clocking in a total time of 40:13.456. The combined efforts of William Dennett, Higlett, Thomas McCormack, Kaleb Treasure, Waters and Blake Hollis, enabled the QLD team to clinch the win overall and on all four days!

Victoria (VIC) conceded for second place overall, thanks to the high-speeds and strong focus from Chibnall, Simon Cox, Jacob Deagan, Mason, Monique Simioni and Wilksch. After four days, the VIC team finished with a time of 2:32:17.999.

The podium was rounded out by New South Wales (NSW), with a total time of 6:24:10.366, by Carpentier, Granquist, Brad Hardaker, Brock Nichols, Bacon and Green. 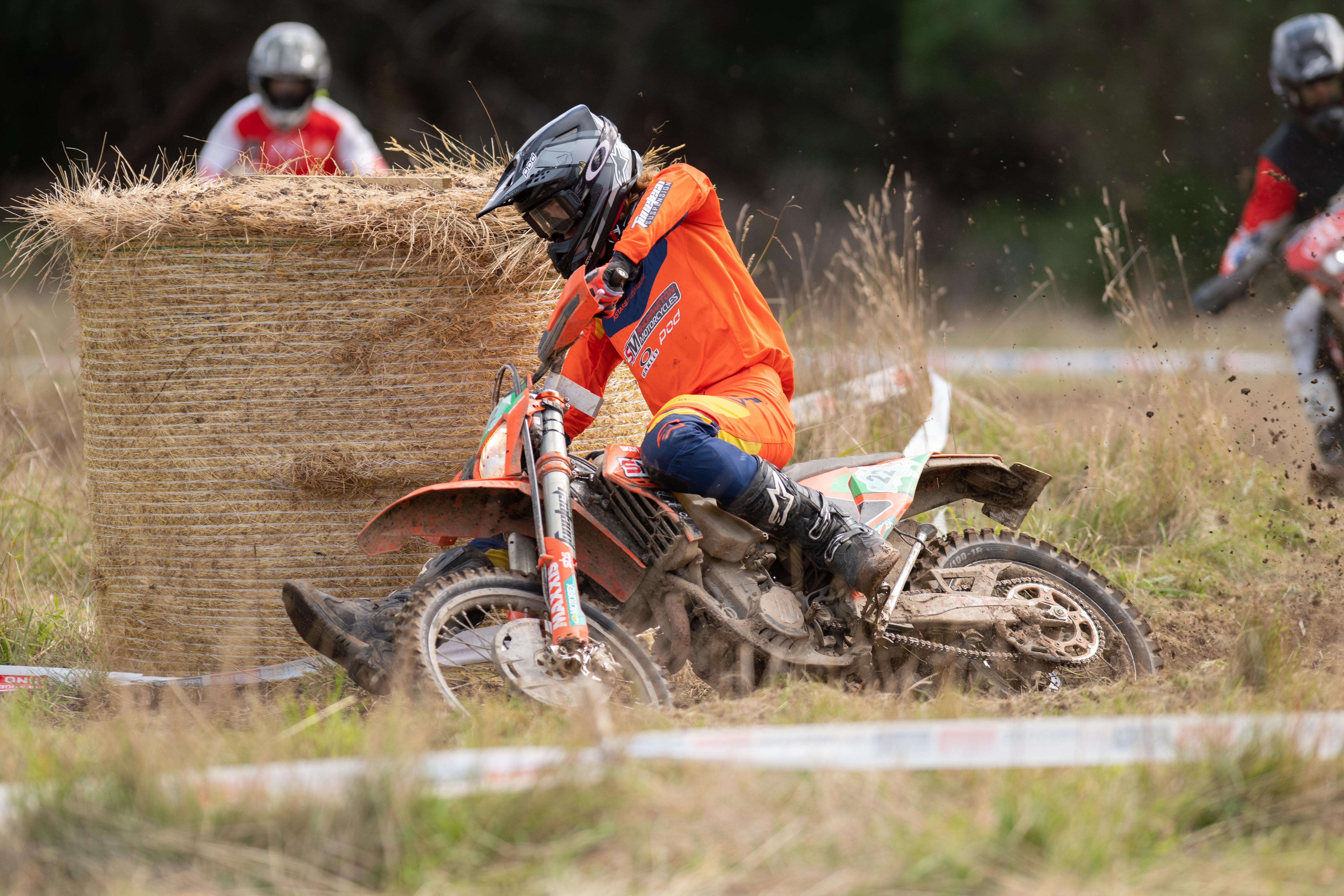 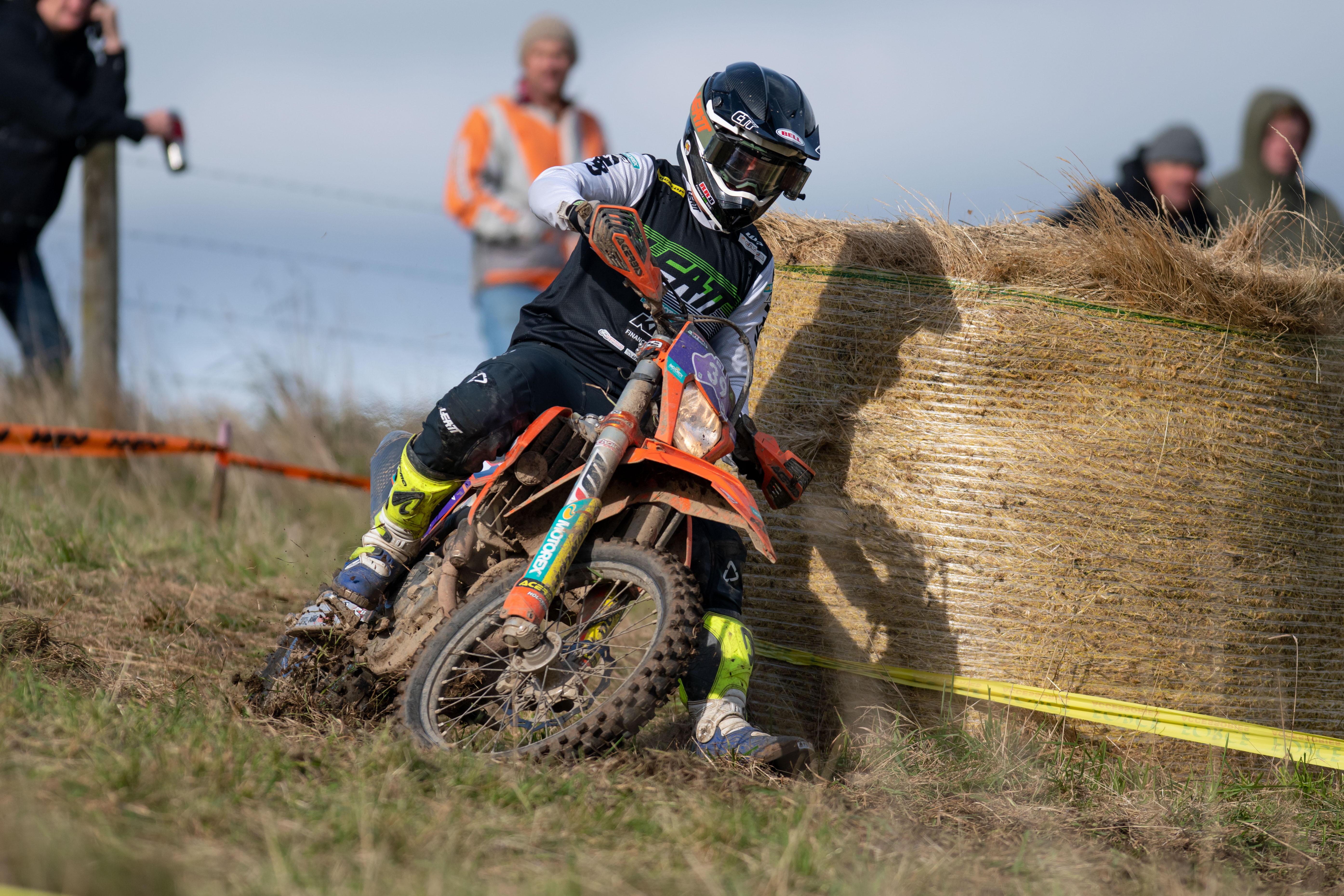 Women’s Trophy Team
NSW may not have won the Senior or Junior Trophy but they came away victorious for the 2022 Women’s Trophy! With the help of Julie Denyer, Gardiner and Karlsson, the NSW team won with an overall time of 05:10.884. QLD took out second place, with a total time of 3:24.17.238, with team members Emily Bielenberg and Ebony Nielsen. VIC filled out the final podium spot with a time of 7:34:04.351, through members Holly Blake, Rachel Boyle and Angela Scott.