You are here: Home / Juniors / FIM MiniGP set for Round Two in NSW this Weekend!
Back

The FIM MiniGP round two hits NSW this weekend at the Sydney Premier Karting venue in Eastern Creek.

With 16 MiniGP riders set to take part, the top three from round one Terrin Fleming (50 points), Harrison Watts (36p) and Levi Russo (29p) will be joined by occasional international racer Josh McLean for a weekend of practice, qualifying and racing. 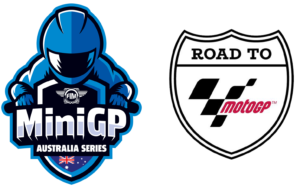 The FIM MiniGP forms part of the world renowned FIM “Road to MotoGP” and is for riders aged 10-14 years of age.

This Saturday, May 14th, the riders will be on track for practice and qualifying for the FIM MiniGP with Sunday the 15th featuring two MiniGP races.

As well as the FIM MiniGP, other classes include the Ohvale GP-0, Ohvale FP-2, Supermoto Pro, Supermoto Pro 250, plus Mini Motards / Groms. With this much on track activity, it will all-action, all-day across the weekend!

As an added bonus for spectators, entry is free all weekend.

For those unable to make it to the event, MiniGP Australia has a new live stream package that can be viewed via the official Facebook Page  or via their Youtube Channel

Motorcycling Australia CEO, Peter Doyle, notes that the MiniGP forms another part of the full racing picture in Australia: “It’s great to see this series heading to Sydney for Round Two. Round One in Melbourne was a great success and showed the incredible potential; from the bikes to the riders, teams and the series itself. It’s a great concept and exciting to see the next generation of riders showing casing their talents.”