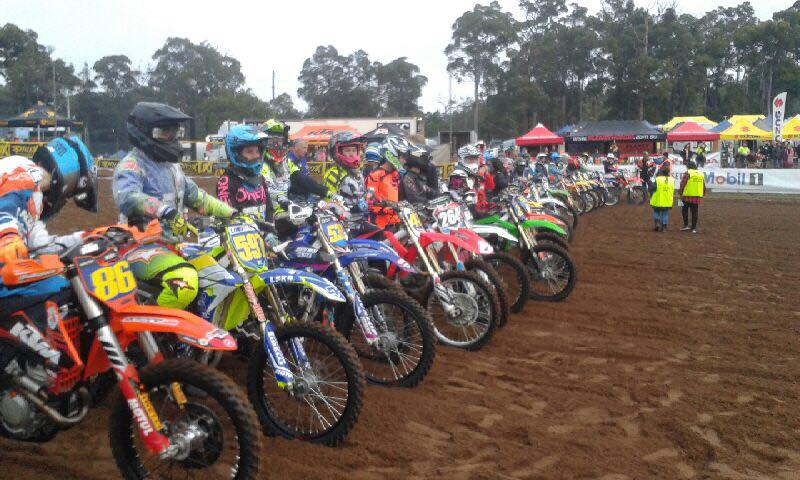 WEM Director Kevin Williams said he was very excited to be able to offer competitors of the MX Nationals support classes the opportunity to race at the world renowned track and to be able to be part of the famous Manjimup 15000 Motocross Event.

Williams said the decision was made earlier in the year to not have an MX National round in WA due to the economic climate however WEM still wanted to support Motocross in WA, work alongside MA and MWA in some way to do this and have a championship round that had spectacular spectator viewing.

“I feel that by having the 3 championships, Women’s, Vets 30-39 and 40 plus as part of the Manjimup 15000 is a big step in the right direction and achieves an outcome that everyone involved feels positive about” Williams said.

“We are proud to be associated with the world renowned Manjimup 15000 event” continued Williams “enabling the Vets and Women to race a track that many of them have dreamed about racing at or racing at once again. For some riders riding at on this track is on their bucket list-let alone competing at the iconic event itself. It will be a great opportunity too for the Vets competitors, their families and sponsors to catch up with old rivals and friends at a track that holds many memories for everyone involved-it’s a great fit.  There’s a lot of excitement around at the moment about who’s going to Manji!”

The support the WA Women Competitors and the FIM Award Winning MWAW Committee have given the 2017 MX Nationals Women’s championships over the past few years has been instrumental in Williams decision to hold an MX National Women’s Championship in Western Australia.

“The collective effort made by support crew and sponsors organising  and enabling a team of 10 women to compete and travel from WA to QLD naturally meant we would want to support a class that had supported us.  Additionally the level of competition racing and the amount of women entered in last year’s Inaugural Women’s class at the Manjimup 15000 was exceptional.  Not only was the racing close which was great for spectators and supporters, the inclusion of the women’s class was a positive step in the growth of the sport in WA” said Williams.

Motorcycling WA CEO Rick Gill said “Having the opportunity to host a national championship is a huge boost for MX in WA, and partnering with the nation’s biggest MX event at Manjimup will only benefit the sport even more.”

“The MWAW committee have introduced a number of initiatives to support the growth of women’s participation in the sport and the results are fantastic with more and more women in WA getting involved. We look forward to seeing a full grid on the line at Manji in 2018 for round one of the Australian Women’s MX championship.”

KTM Australia’s General Manager, renowned International Motocross Champion and two-time winner of the Manjimup 15000, Jeff Leisk, said “The Manjimup 15000 is an iconic event that is arguably the best in Australia, the track is unique and incredibly challenging with its super-fast straights and elevation changes.”

“Both the Women and the Vet’s competitors have the perfect canvas to show case their skills to the large crowd that is always on hand and with this year’s event being sanctioned as a national round racing will be extremely competitive.”

Australian and WA Vets Champion, Steve Mouritz, is thrilled with the news and said “In 2010 I competed in the Aussie Vets Championship whilst also competing in the Pro Open class under the support of Pirelli Motul Suzuki. I enjoyed racing alongside Australia’s top Pro Open riders, but the experience fell short of what I encountered racing in the Veterans Class.”

“There was nothing like banging bars with mates Cameron Taylor and Darryl King. It really reminded me of the 90’s. That event alone convinced me to make the journey, once again, to Coolum to compete in the Aus Vets Championship”

“Being better prepared second time around, and with some laps of the track under my belt, I was able to walk away with the win in 2012. Looking back at it now, it was one of my favourite wins and one event I never questioned what on earth I was doing that day. Fast forward 5 years and unfortunately work hasn’t given me the opportunity to make the journey back.

However after hearing that this year Kevin Williams has decided to incorporate the Australian Veterans Championship with the Manjimup 15000, I am super excited!”

“The Manjimup 15000 is an event that my kids and I look forward to each and every year. It’s great to watch the kids turn laps around such a great circuit and see the enjoyment that they get from competing in a world class event. Knowing that this year I can compete in the Aus Vets Championship the day after I watch my kids has got me counting down the days to the first weekend in June.”

Winner of last year’s Women’s Manjimup 15000 Class and runner up of the 2017 National Women’s Championshp’s, Jess Moore said today “I’m super excited to have the first round of the Women’s Nationals Championships in Manjimup, it’s definitely one of my favourite tracks in the country and the 15000 is such a good weekend of racing and great to see the Women’s Nationals finally come to WA”

“It’s also great to see the Motorcycling WA Women’s Committee get rewarded for the amount of effort they have put into women’s racing, especially after WA always being so well represented at the Women’s Nationals held at Coolum the last 2 years”