You are here: Home / Dirt Track / Brook Dominates at Barleigh Ranch
Back 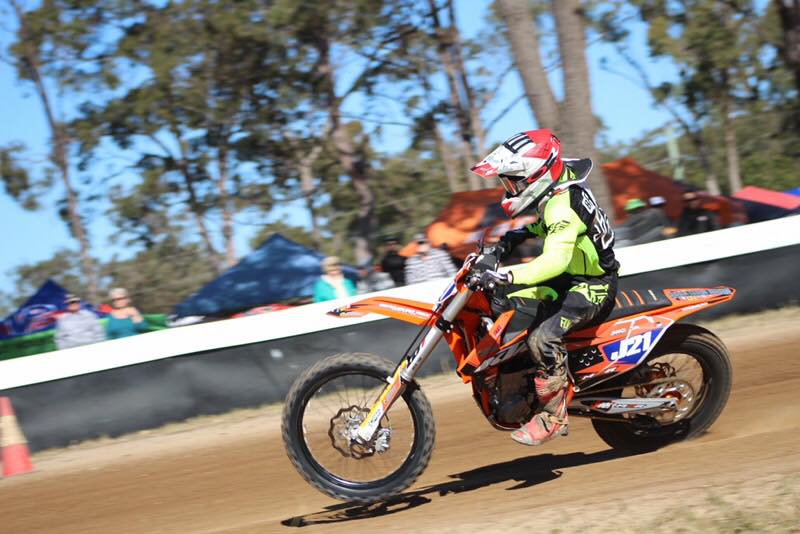 It was in fact Queensland riders who had a stranglehold on results providing the winners of seven of the nine championship classes which provided two days of top quality action for an appreciative crowd.

At the top of the pile was Brook who again showed his liking for the Barleigh Ranch track to claim three class wins – Pro 250, MX Open-and Pro 450 -and second place in the Pro Open class to exactly match his performance in the corresponding championship meeting at Tamworth last year. Brook showed no concerns over the shoulder injury he suffered at the Central Coast Cup meeting back in May.

Townsville rider Kayden Downing (2,1,2 in his heats) was an emphatic all-the-way winner in the Pro Open final while top qualifier, the unbeaten Brook battled hard after a poor start to just snatch second place on the line from Sean McLellan (1,3,3) with Daniel Wicks (4,4,2) fourth.

The Pro 250 class produced a clean-sweep of heat s and final for Brook, and plenty of very close competition behind him. Sam Davies (2,2,2) finished second in the final ahead of Jake Farnsworth (3,2,3) and Bailey Spencer (1,4,4).

It was another Brook clean-sweep in the MX Open, with Kayden Downing (2,fall, 2, won repechage) this time grabbing second in the shadow of the checkered flag ahead of Daniel Wicks (2,1,2) with Mackenzie Childs (1,2,1) fourth.

The final of the Pro 450 class was red-flagged, much to the chagrin of top qualifier, the unbeaten Daniel Wicks, who had a significant lead when Kayden Downing (2,1,1) fell.

In the re-run Brook (2,1,1) was closer to Wicks sooner, and got by with Mackenzie Childs (1,3,2) collecting his only rostrum place with third ahead of Bailey Spencer (1,2,3).

Brook also received the Rod Allen Memorial Trophy for the Pro 450 victory, presented by Ross Allen, a repeat of when Brook won the inaugural staging at the 2017 Trackmasters meeting.

Over five rounds the Under 19 class was only decided by a last lap pass in the final round leaving Jake Farnsworth (3,2,2,1,1) on top of Bailey Spencer (1,4,1,3,2), Harry Scott (4,1,3,2,3) and Angus Hutchinson (5,3,4,4,5). Harry Maxwell could not defend his crown after suffering a hand injury in a speedway crash the previous week leaving the only 2-wheel victory for the host state.

Hugh Skidmore was a commanding winner of the 500cc slider class which, not unexpectedly, consistently produced the quickest lap times of the meeting.

Not always the fastest starter, Skidmore was unbeaten, heading Matty Day (2,1,1), early race leader James Bevan (dns,2,dns) and defending champion James Davies (1,2,2) in the final.
In his last heat Hunter Anderson (3,3) firstly and then Davies (1,2,2) fell, ruling out Anderson with an ankle injury.

The Fiens also received the George Watson Memorial Trophy, presented by Chris Watson, which was first contested at the Trackmasters meeting last year.

Robert Booth was dominant and never headed in claiming the ATV Open class ahead of Kevin Griffiths (3,4,2,2,2), Ben Cartwright (4,2,3,4,4) and Ian Haggie (5,3,4,3,3,). Defending champion Matthew Griffiths was sidelined after following Booth home in the opening round.

Speedway Sidecars were relegated to a support class with just three (of the five entries) actually appearing.