Unlike most of his fellow bLU cRU Oceania Junior Cup classmates, Glenn Nelson can call himself a local of both Windaroo, Queensland (QLD) and the town of Kendal, in the South Lakeland District of Cumbria in the United Kingdom. The 12 year old, who features as this week’s bLU cRU Oceania Junior Cup profile, currently sits in 12th position on the inaugural leader board.

Of the six races our juniors have undertaken over the past two rounds, Nelson has completed three. The youngster has suffered a difficult blow, which saw him out for Race 2 and 3 of Round 1, as well as Race 3 in Round 2. For most competitors, this challenge would have been enough to sour their attitude. But not Nelson, whose sheer grit, determination and insatiable positivity shines through as he heads into Round 3 at Morgan Park Raceway, QLD this weekend.

Running in conjunction with Round 4 of the Motul Pirelli Australian Superbike Championship (ASBK), Morgan Park Raceway is a local track for #39, delivering an extra boost of confidence and drive to clock up strong lap times and in turn rake in those coveted points. Describing himself in three words as competitive, humble and keen, Nelson comes into the bLU cRU Oceania Junior Cup with former experience in Supermoto, Dirt Track, BMX, as well as a Dirt Track Australian Championship title and the first ever Coffs KTM 2018 NSW Short Course Road Race State Championships Rookies winner. 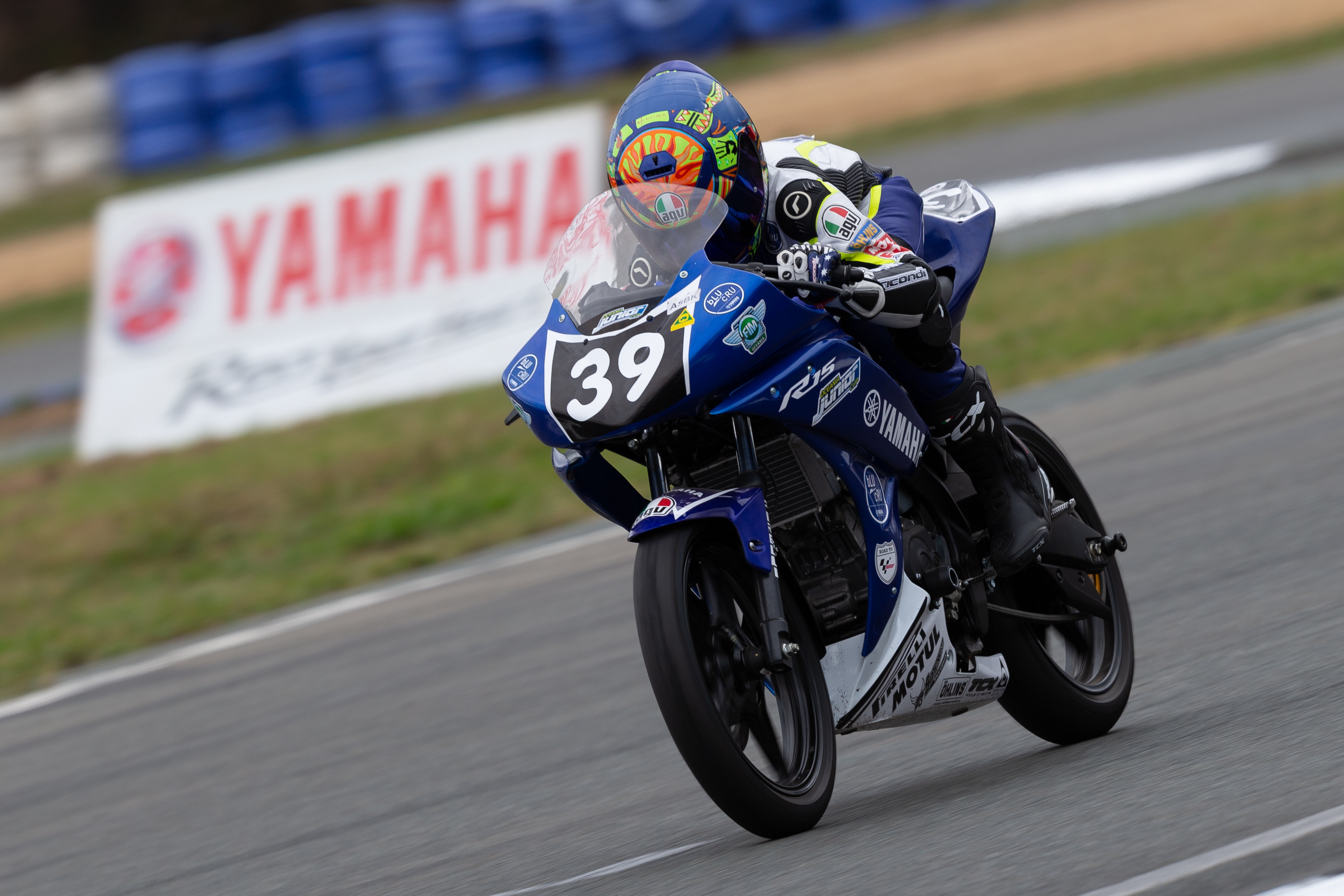 Tell us about where your love for motorcycle racing began and why?
It started when I used to go to the Isle of Man TT, when we lived in England. We used to go every year and would hang out in the pits for one of the riders called Lee Vernon, who sadly passed away back in 2012.

I also get a lot of my love of bikes from my grandad who used to be a mechanic for some Irish Road Racers. My dad and mum also grew around bikes, so I’ve been surrounded by the sport ever since I can remember!

My love for the sport is inherently because of the fun and speeds involved in riding! I’ve never really found riding scary!

Tell us about the first time you hopped on a motorcycle.
I remember my grandad used to push me around the backyard on his LC40 electric bike when I was two, and my love really grew from there! As I grew up, I used to ride BMX but one day broke my jaw in three places, which really put me off bikes and riding for a while. When I turned seven though, I got my first ever motorbike two weeks after doing the Come-n-Try Yamaha experience at a Troy Bayliss Expo! The rest is history after that!

Thinking back, tell us about one of your favourite memories growing up when it comes to motorcycling?
That would probably be my first time at the Isle of Man TT, when I was about three, and I saw the first bike go past me. When it flew past I think I nearly jumped 20 feet in the air!

Another great memory would be when I won a title for the Australian Dirt Track Championship back in 2016. I rode Dirt Track before we got into Road Race and that was a really special moment for me! Alongside Road Race, I now do Supermoto and also train in Mountain Bike riding.

What career do you hope to end up in? For example, WSBK or MotoGP racer?
I want to make it into the Red Bull MotoGP Rookies Cup or the Moto3 World Junior Cup! Something like that, that’s international, will be an absolute dream come true! 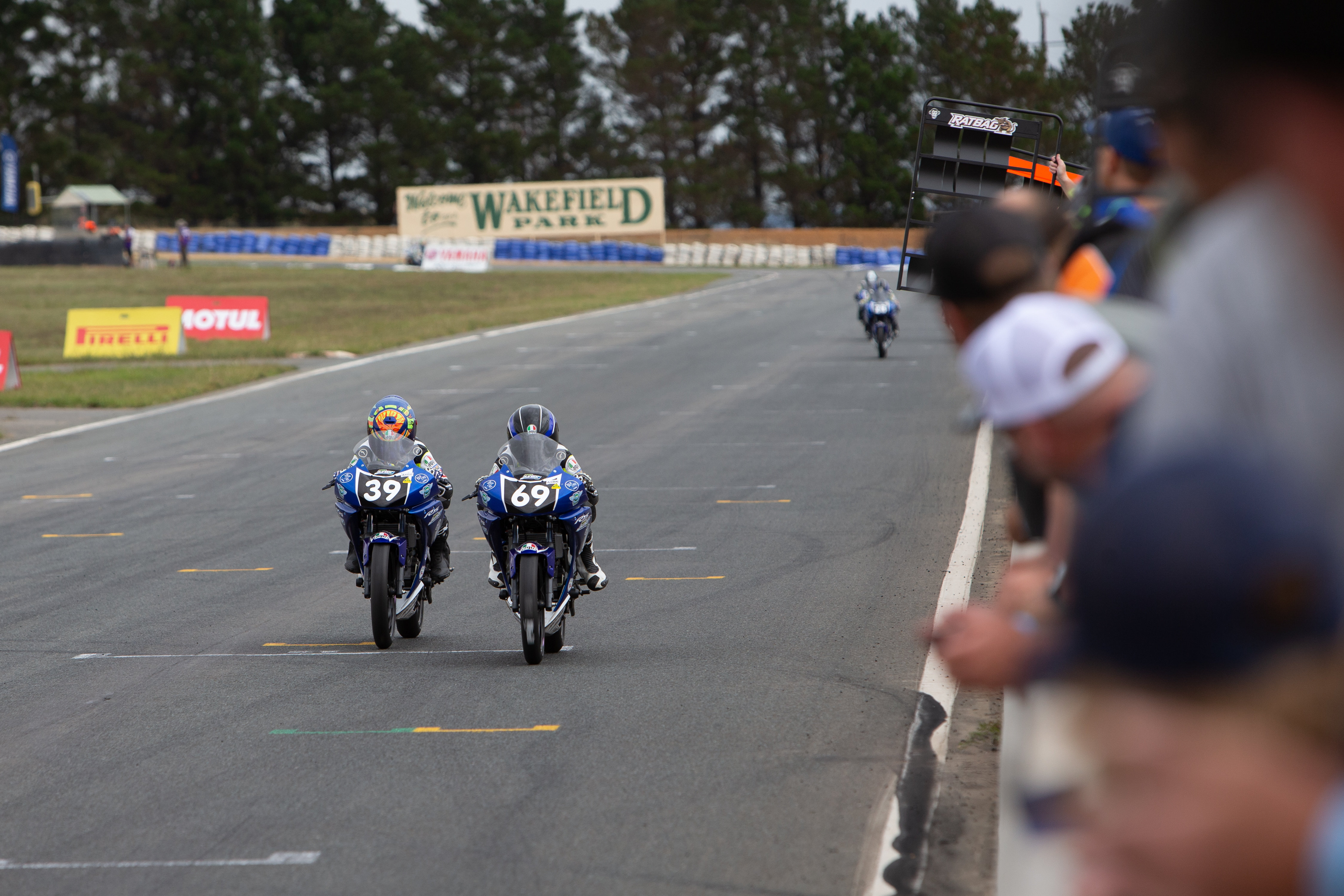 Tell us who your sporting idol is. How have they impacted you and your love for motorcycling?
When I was growing up my sporting idols were Michael Dunlop, Joey Dunlop and John McGuinness.

Nowadays, my idols are Fabio Quartararo, Valentino Rossi, Tony Arbolino and Tatsuki Suzuki. I look up to these guys because they have a lot of talent! Rossi has been doing MotoGP for a long time and is very experienced. Quartararo, Suzuki and Arbolino come with a lot of talent and a lot of speed, and they can show it on the track to win, which makes for a great race.

I try to copy their riding styles. For instance, I try and get my body on the side so I can keep the bike straight and on the fat part of the tyre. That also looks cool, I think!

What have you learnt from the bLU cRU Oceania Junior Cup?
The most important thing I’ve learnt is to always to stick with the pack. It gives the opportunity to get a good lap time and also gives you experience dealing with other riders. This experience is a big learning curve for a lot of my fellow bLU cRU Oceania Junior Cup classmates, but thankfully I have a bit of experience in this matter, so I feel a bit more confident in those pack environments.

But I’m finding that everyone is learning and growing, every single lap. So that means now that you need to be at the top of your game every round! Because everyone is at the top of their game and on the same bike, there are no advantages, so it all comes down to skill and focus!

Sponsors like Öhlins and Pirelli have helped us a lot too! Öhlins have taught us about suspension and what we need to look for and how to communicate that to mechanics. So we’re learning how to enhance our own individual riding style!

I’m coming into this weekend with my full potential! Morgan Park Raceway is my home track so hopefully we come away with a win! It’s a great track and I’m feeling confident, so it’s going to be a good weekend! 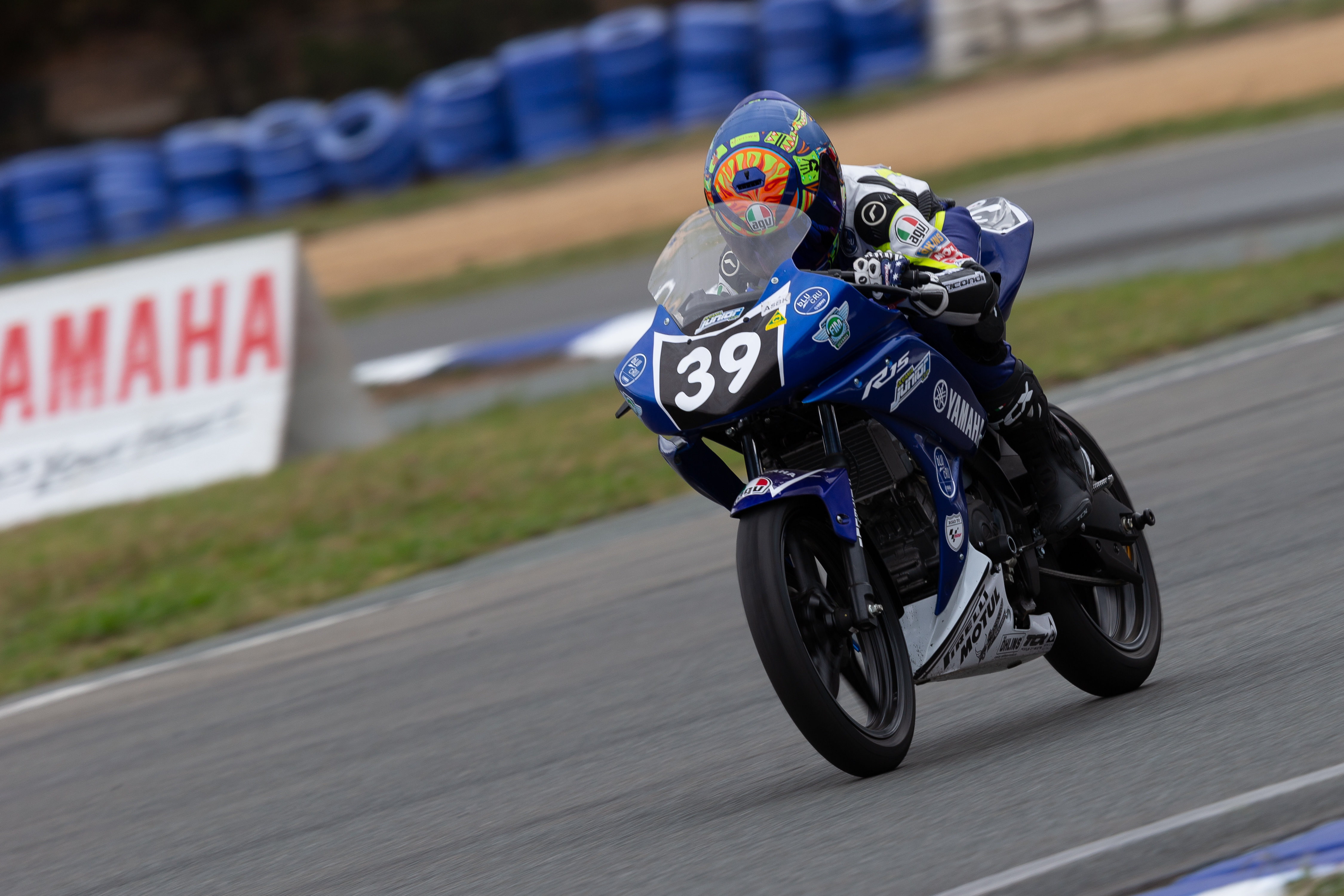 Tell us about your bike, helmet, leathers, gloves and boots. How are you adjusting to the new bike? How do you find the products that have been chosen specially for you?
I really enjoy the Yamaha YZF-R15 bike! It’s a good bike to develop on!

My leathers are the comfiest I’ve ever had! They’re stretchy and help me be at my full potential all the time! These are definitely the best leathers for juniors right now. Even when you crash, they don’t break, so you feel very safe.

The AGV looks good and they don’t fog up, which is exactly what you need! Even when you crash, they don’t scratch as bad as most others and the visors are strong and don’t snap.

The TCX boots are the best boots I’ve ever had! I only run TCX boots because I believe they’re the best brand of boots you can get.

The bLU cRU Oceania Junior Cup, even in its first year, is growing so much and that’s cool to see. It is very different to other things in the Junior Road Race world and I really like that it stands out of the crowd! 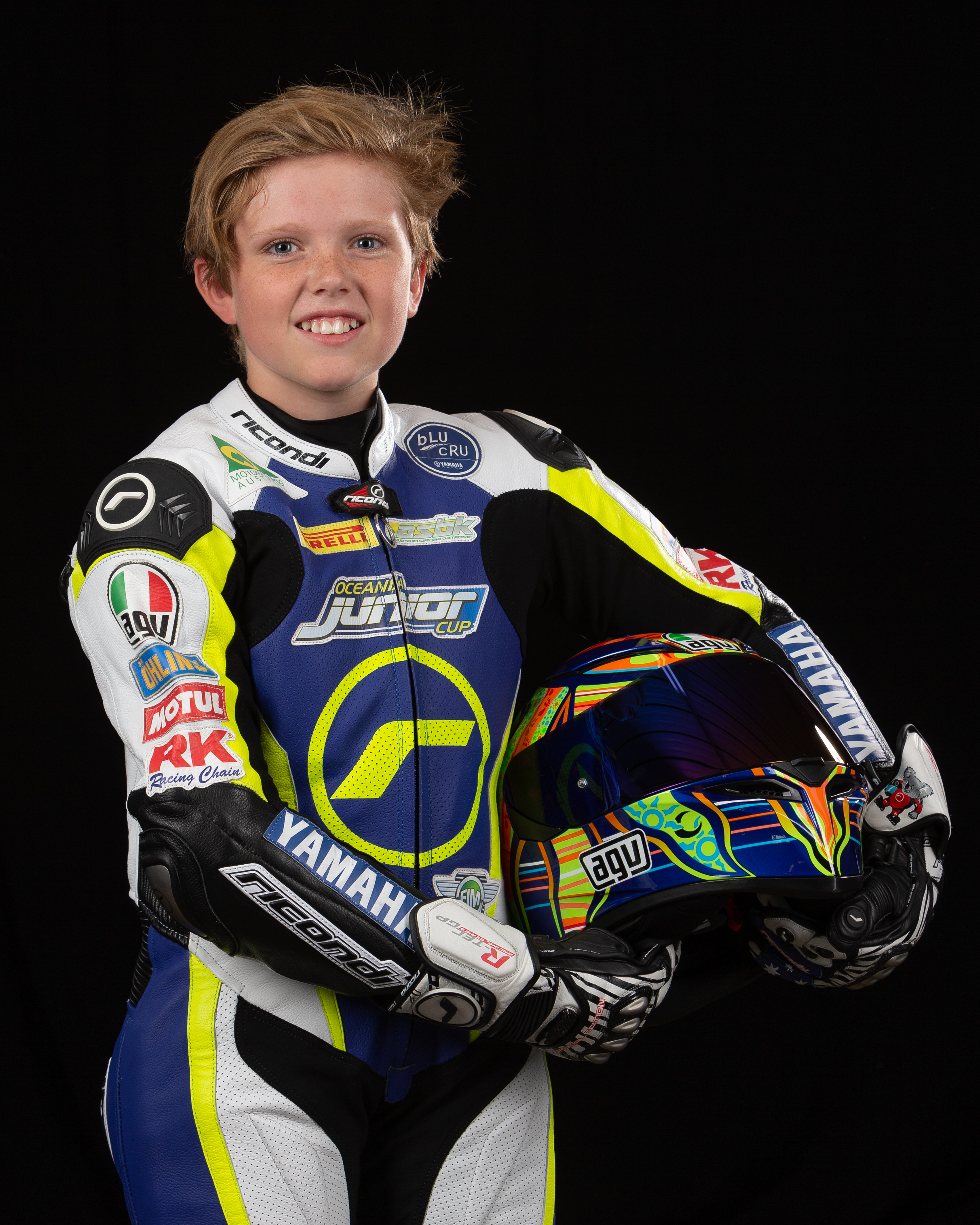