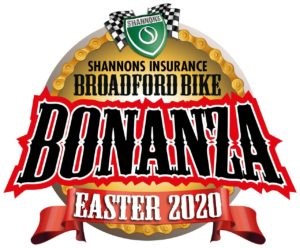 The 2020 Shannons Insurance Broadford Bike Bonanza (SIBBB) is already shaping up to be one for ages, with this year’s incarnation centred on ‘American Iron’. Crowds are set to be impressed with a huge turnout of Road Race, MX, Enduro, and Speedway classics as they hit the tracks from April 10, at the Victorian State Motorcycle & Sports Complex.

Past Bonanza’s have seen celebrations of Ducati, Honda, MotoGuzzi, Vincent’s and all manner of other motorcycle marques, however, the American Iron theme has always been in the pipeline, and what better way to enter a new decade than to look back in homage to legendary star spangled icons as Harley Davidson, Buell and Indian – to the (now) lesser known, Henderson, ACE, Simplex, Crocker, Excelsior, Iver, Pope, Wagner, Sears Roebuck, Hodaka, Curtiss, Flying Merkel, Mustang and Yankee, Cushman, to name a few. But, what to do with machines that are fast approaching 80, 90, 100, 120 years old, are still perfectly rideable, serviceable and highly desirable? Ride them of course!

In what could only be described as a perfect amalgamation of the 2020 Bonanza title sponsor, Shannons Insurance, the ‘American Iron’ theme and the Vintage racing scene in Australia, the Bonanza coordinators needed a poster child for the unique event.

The Bonner name has long been paired with curatorship and racing of vintage Indian and Harley Davidson’s since the 1980s, with Rob Bonner contributing his time and energy over many decades to the club (approx. 300 members in Oz) and to his racing in general.

Bianca was born into Indian camaraderie and motorcycle racing of all descriptions -with her family owing a suite of Indians over the years, even a Kawasaki H1 Mach 3 through the 80s. Bianca was gone hook line and sinker as soon as she was walking with such an array; “When we were kids we’d be lucky enough to sit in the sidecar on Dad’s ‘29 101 Scout” (think Roland ‘Rollie’ Free’s bike!) Bianca said. 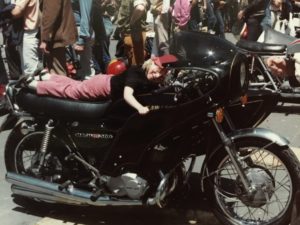 “My brother got into riding before I did. I remember being five years old telling my Dad that ‘I’d be doing that one day too.’ I was seven when I started racing 60cc & 80cc MX joining the Whittlesea and Shepparton Clubs (VIC), and shortly after started racing on the oiled dirt track at Shepparton.” Bonner started.

“I first raced Dirt Track and Junior Speedway for a couple of years – averagely, before upgrading to a 500cc Jawa Speedway solo and then to a YZ 490 Sidecar.”

“Dad and I always had a deal. As soon as I could get my road licence, and could start the Indian Scout, he would allow me to ride it. It was even fully road registered! With this in mind, I was licensed as soon as I possibly could be (17 and nine months). Spurred on by the terms of the deal, I spent ages in the shed kicking and kicking it and trying all different things until finally it roared into life! Dad was reluctant to live up to his end of the bargain!” Bonner recalls.

“Years ago I had a few classic ride days which I attended and latched onto the scene. I was fortunate enough to score a ride on a race prepped WR Harley at Barry Sheene – Eastern Creek.” 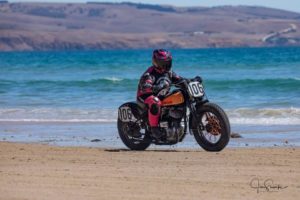 Bianca Bonner at Sellicks Beach 2018 on her 1942 Harley Davidson WR race bike. She won fastest Woman on the beach that weekend with a time of 1min 49sec.

“I now have a Harley WLA with a WR race motor to race in Hand Shift & Class C. We have three rounds of Class C; The Victorian Titles, Historic Motorcycle Racing Association of Victoria Historic Winton and The Southern Classic. When we are not competing in those events, the bikes are eligible for Vintage Class of upto 1200cc. HMRV have catered for our bikes in that class for those meetings.”

In the 1990’s, Class C was introduced to Australia from America, with it’s main growth being over the past two decades, as the Indian marque joined ranks here. The rules adopted Down Under, replicate the American Historic Racing Motorcycle Association rules, allowing for global competition when the opportunities present themselves in either country. Machines racing in the series are mostly stock, which keeps the cost down, competition close and enjoyment to the max.

Bonner continued; “Competitor numbers in these classes has actually grown in the past couple of years, to about 30 -35, bikes seem to be coming out of peoples sheds , people out of the wood work, 100 year old spare parts keep on turning up out of the blue! It’s amazing!” She said.

What’s it like to race a vintage bike like this? Bianca Bonner (Shannons Insurance, Girl Rider, Powder Puff Racing) shared;
“Jockey shift, tiny drum brakes, the bikes are so much fun to ride and the attachment is an emotional one, the nostalgia is unreal. The bikes are definitely not as fast as modern era bikes, but they do require more tact, care and planning. You certainly have to commit to what you are doing around the track. Cornering, acceleration and braking zones are all fully panned out well in advance, the non-synchro meshed gear boxes do not allow for sloppy or mismatched shifts, doing so will lock up the rear causing the skinny tyres to break traction, there’s no quick throttling out of that situation either. You need to be on your game lap after lap with a great deal of mechanical empathy for the bike.” 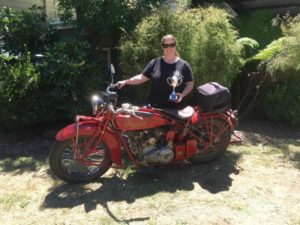 When asked what her experience has been in a traditionally male populated arena, Bonner quipped “As a woman in motorsport, I’ve been treated very kindly by everyone since the get go- right from when I was a kid. All the guys treated me as they would anyone else – just another competitor in their way! It is great to see the large number of girls coming through the ranks in all disciplines of riding over the past couple of decades especially.”

“There were are few girls racing MX with me at Goulburn Valley back in the early 90s, and one of them even ended up becoming my Junior 80cc sidecar passenger! – No issues except for a couple of young blokes cracking the sad’s when we beat them! But it was always in good fun. The vibe in the paddock was always a supportive one and I encourage all females to give it a go.”

We asked the Indian Club President what impact Burt Munroe’s infamous biopic, The World’s Fasted Indian, had on the popularity of Indians down under;
“It really revived the marque in a main stream way, however there were always are large number of Indian devotees.  There seems to be more classic Indians on the road now since the 2005 film. Perhaps the movie sparked a few people to complete their restorations in true Munroe style.” Bonner posed.

As a repeat Bonanza attendee and participant, Bonner said;

“Being a display and not a ‘race’ event, the SIBBB sees a plethora of bikes that would otherwise not see the light of day. These bikes are now worth a lot of money and parts are becoming scarce. Some of the bikes featured at Bonanza in are quarter of a million dollar bikes!”

“The spectators love it – Vintage machinery at any event is an absolute crowd pleaser. They can see, feel, hear and smell the machines. It brings a smile to young and old. Hearing comments and people coming up to you in the pits, saying ‘I used to have one of those, or  … my mate this or my Dad that.’  All bringing back memories.”

“For the 2020 SIBBB, I am hoping people will bring their bikes out of their sheds- whatever they may be, and at least have a think about riding them. The SIBBB is all about bringing enthusiasts together, and perhaps find a few that have lost their passion over the years due to life’s commitments. It’s all about reigniting that passion and passing the torch to the next generation.” Bonner ended.

Follow Us:  As always, keep up to date with all the latest news and information about the 2020 Shannons Insurance Broadford Bike Bonanza at ma.org.au and Facebook page. https://www.facebook.com/Broadfordbikebonanza/

So be sure to attend the Shannons Broadford Bike Bonanza to witness a diverse range of classic motorcycles on show and on track as they were intended to be!