ASBK Women Aiming For The Top

You are here: Home / News / ASBK Women Aiming For The Top
Back 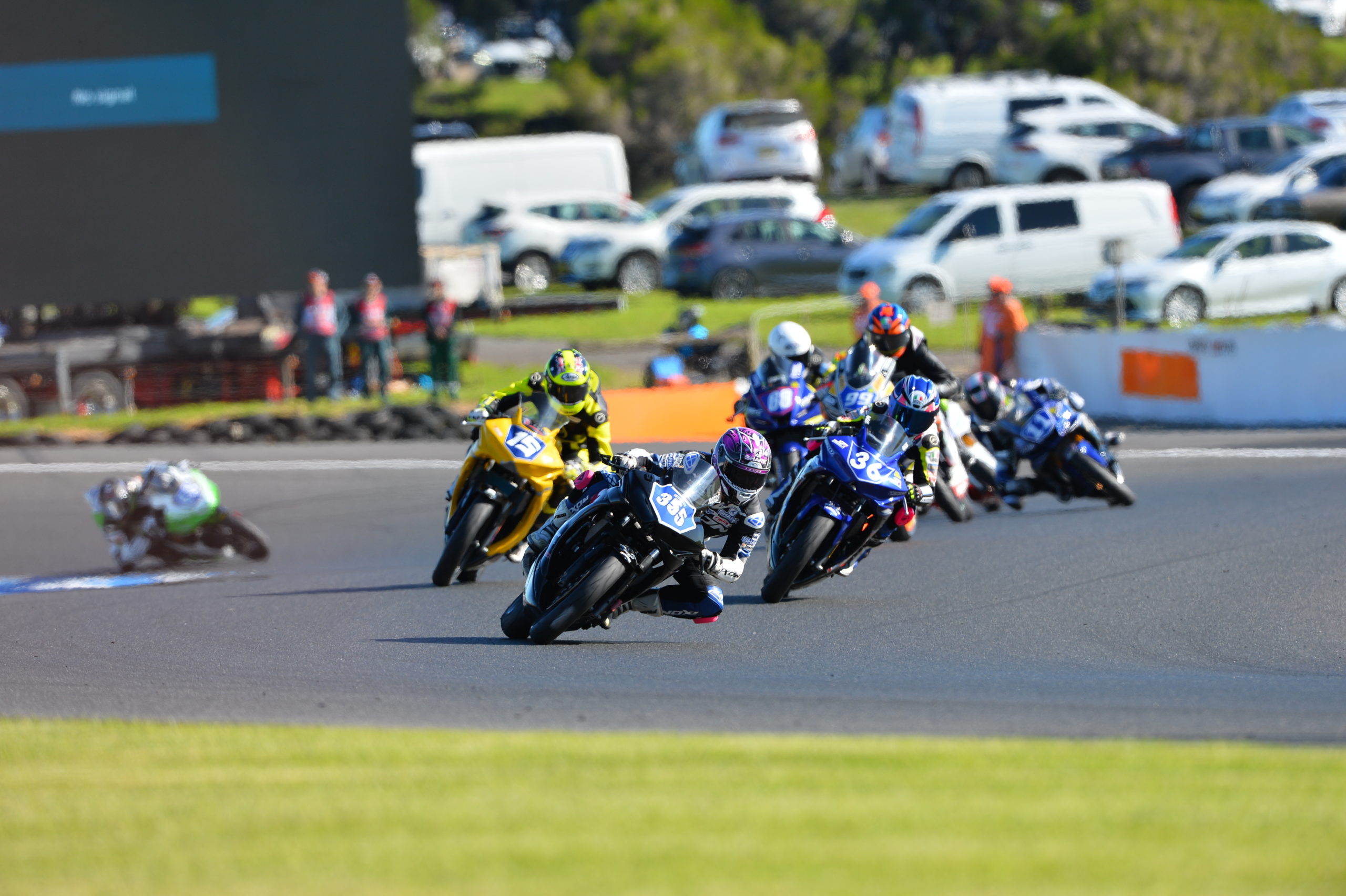 In a special 3 part feature story, we look at five gifted women competing in the ASBK YMI Supersport 300 class.

Five talented women competing in this year’s mi-bike Motorcycle Insurance Australian Superbike Championship, presented by Motul, (ASBK) are not only hoping for championship victory but are also hoping to inspire the next generation of female riders to get on track.

These women aren’t racing just to make up the numbers, they are talented, competitive, hungry with fire in their belly, and want to be on the top step of the podium, just as we saw at the first round of ASBK at Phillip Island as part of the Superbike World Championship earlier this year.

With more than 40 competitors, these women are cutting their teeth in the highly competitive YMI Supersport 300 class which produces spectacular bar to bar racing from the drop of the green flag to the chequered.

More often than not a dozen riders are within millimetres of each other as they fire out of the last turn battling to be first across the line.

At this year’s first round Laura Brown battled for the lead in race one dicing with several riders before crashing out on the second last lap over Lukey Heights, but she secured a third position podium in race two and eighth in race three putting her in 10th position in the Championship.

The Bare Bird, Bikebiz, Shark Helmets, IXON, Obvious Signs, West Sliders, Draggin Jeans sponsored Yamaha YZF-R3 rider has clearly stepped up from last year and will be one to watch in 2020.

Keegan Pickering aboard the Kompress Co, Jekyl + Hyde Moto, Earmold Australia, Fly Racing Australia, Yamaha sponsored Yamaha YZF-R3 returned to the championship after a big crash at the Bend last year, and managed to avoid the race one and two carnage finishing 31st and 28th respectively, and 29th in the third race to build her confidence back up for the season.

Newcomer, Hannah Stewart on the Lee Mechanical, Penrite Oil, Banhams Road Racing WA, Leading Edge, Original Canvas Works backed Yamaha YZF-R3, rode her first road bike just over 9 months ago and only her second time on the 300 got caught up in crashes race one and two and but secured 33rd in race three.

Despite the rough weekend on track for the first time ASBK entrant, Stewart managed to cut three seconds off her Official ASBK Test best lap time earlier this year and is eager to get back racing.

We caught up with the riders to get their thoughts on their first round, women in ASBK, and how they are keeping fit while the racing has been put on hold.

How was your first 2020 ASBK round at Phillip Island? 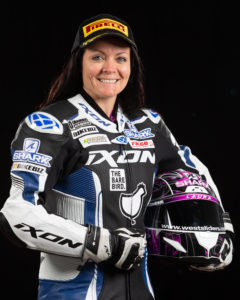 Laura Brown – All in all it was a very challenging round, the class is just getting faster and closer. I qualified in 4th place, which is crucial in this class, and in the first race I rode to my strategy as intended, setting my race position up perfectly in 4th approaching the last sector. I’d dropped off the front by three-tenths so I had to push hard to gain ground, but I carried a little too much corner speed over Lukey Heights and lost the rear. It was a big crash, and I was in a position to fight for the podium, so naturally I was very disappointed. My team basically had to rebuild my bike in time for race two, which proved to be as equally as tough as race one with lots of on track battles and position swaps, and I was very lucky to finish on the podium in third position. Race three I was in 2nd place for the first quarter of the race with a healthy gap back to 3rd, however a small change we made proved to be the wrong direction and I suffered a little with rear grip so I could not hold the advantage, and I was soon back amongst the pack dicing for the minor podium places. I finished 8th with only half a second between 2nd & 10th as we crossed the line, so it was anybody’s race for the remaining podium spots.  Despite one DNF I secured 10th in the championship after round one, so I couldn’t be happier.

Hannah Stewart – I loved the track at Philip Island and as I’m new to road racing, this was the only track I’ve been on. My first round at Philip Island was a great experience and it gave me an insight into what I have to do to run with the top riders.

Tayla Relph – Certainly not as I expected, however I’ve been going through some serious health issues that I was unaware of so that made the weekend a bit harder for me.

Stephany Kapilawi-James – The weekend went great. Managed to finish somewhere in the mid-pack amongst the SS300 class and had a few good battles. When slipstreaming is key, you really had to play your cards right of when to go and when to hold back to get a tow. On the other hand, when I jumped on the Supersport class, slipstreaming wasn’t really a key. It was all about hanging on when you pull out of the slipstream to brake for the corner and you feel the power of the Bass Strait wind wanting to rip you off your bike and everything is a blur, and that was only turn one. Also had a few moments here and there but it was all part of the learning. Overall, it was a great weekend, didn’t crash and had heaps of fun on and off the track.
Keegan Pickering – Round 1 of the ASBK combined with WSBK is always an event I look forward to every year – this year we went to Phillip Island with not much expectation as I had only road raced once since my accident back in April (2019) at The Bend Motorsport Park. We came away from the event with new knowledge of the circuit and bike, many memories and friendships. We finished the weekend better than we started and my times were still coming down, unfortunately we didn’t reach a new personal best but still happy with how we ended up.

Your thoughts on there being five women competing in ASBK this year?

Laura Brown – Wow I didn’t know there were five of us, that’s really encouraging, go girls. On one hand I’d like to see enough girls in the paddock to create a female class embedded within the main classes – although on the other hand I don’t like our gender to define who we are on the race track, so it’s mixed feelings on that subject for me. Either way, I’d love to see more girls dusting up the boys in any class. If ASBK could develop into one day having 15 or more females racing, then that would be amazing.

Hannah Stewart – It’s good to see 5 women in ASBK. It shows there is room for us chicks showing the boys what we are made of.

Tayla Relph – It is certainly great to see the numbers rising for female competitors in the sport, and I hope these numbers stay consistent, if not higher, throughout the year.

Stephany Kapilawi-James – Well it’s better than none at all. I hope the numbers do get better throughout the years. For example, last year we had 6 at the start then we slowly got depleted due to injuries, etc. but overall, it’s always great to see the girls representing.

Keegan Pickering – With five women competing this year, I think it’ll be interesting. We’re all determined and committed. This is a step in the right direction to expanding the gender equality in the sport and for ASBK.

How does it feel competing in what is a male dominated sport?

Laura Brown – Well, you know what they say ‘when the visor drops the bulls@*t stops’, so I give no quarter, and the lads give me even less.

Hannah Stewart – I’m happy to compete against the men. I interact with them, earn their respect and I don’t get easily offended. I like to be challenged when I ride with them, it makes you a better rider. 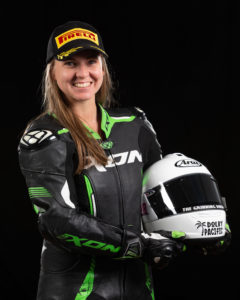 Stephany Kapilawi-James – I feel right at home when competing in such a male dominated sport -thanks to my 2 older brothers- I love the challenge and to push harder to be better. I’ve always been competitive and knew I didn’t quite fit in a team sports environment and that’s why motorsport is very different. Everyone looks the same with the gear on, it’s all about who’s got the better talent at the end of the day.

Keegan Pickering – I think in a male dominated sport as a female shouldn’t have its perks or differences, once a helmet is on, we are all equal, we’re all there to race our bikes.

Part 2 of this special feature story will be online this coming Wednesday, April 22, with part 3 on Friday, April 24, 2020

While the ASBK is currently in a pit stop due to COVID-19, make sure to stay up to date with the latest news on the mi-bike Motorcycle Insurance Australian Superbike Championship, presented by Motul at www.asbk.com.au as well as Facebook and Instagram