ASBK ’22: Alpinestars Superbike- The Final Day of The Season- Jones Takes All

You are here: Home / News / ASBK ’22: Alpinestars Superbike- The Final Day of The Season- Jones Takes All
Back 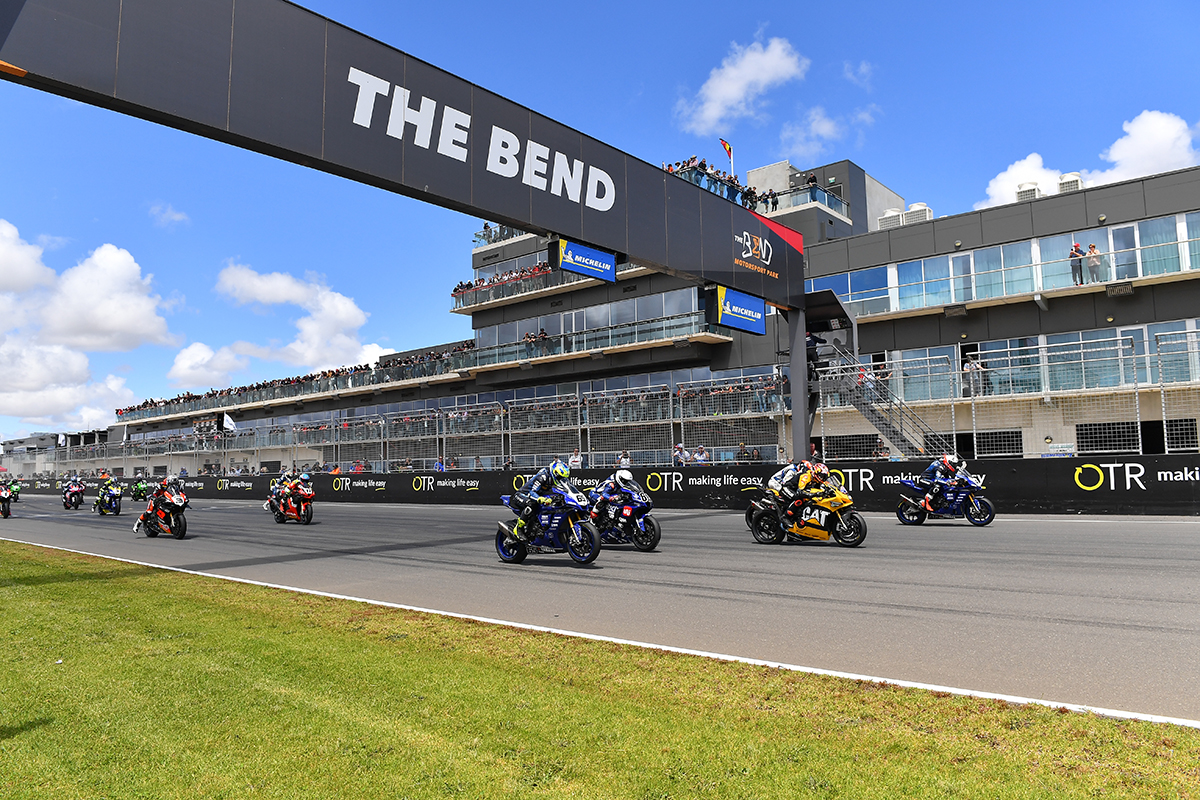 The morning warm-up was very short and sweet with most riders happy to carry their setup from Saturday into race day.

The overseas contingent who have been chasing setup from Friday- including riders like Marcel Shrötter and Travis Wyman, were keen to find some time and pace so were indeed going out with some new things on the go.

Jack Miller said he was happy to leave things as they were and given his P2 position the only real challenge for Jack will be the non-launch control starts on his Panigale V4R.

For the record, Sissis was quickest in the warm-up and those in the know nodded.

And so it was. Sissis just sent it from the line and jumped away into the lead while Miller slipped back to fifth. Allerton was second with Jones in third. Maxwell, Herfoss and Starting got great starts.

Halliday was caught napping and was 12th.

Sissis worked up a small gap over Allerton and Jones and no one who had been watching the Unitech Yamaha with Sissis aboard all weekend were surprised.

Jones tried a move into turn one of lap two and it cost him a place as the wry contender Miller pounced.

As our eyes were rightly on Miller, Staring and McConnell came together and both went down at turn one and that brought out the red flag.

The riders went to the grid for another go at the starting caper. Staring was allowed to rejoin (McConnell was excluded) and

Halliday would be thanking the racing gods, having been given another chance after his first start nightmare where he was 12th at the red flag.

Agius was missing with a clutch issue and Staring went late from pit lane. An electrical issue would end Staring’s charge shortly after.

At the restart, it was Sissis all over again with Glenn Allerton again second. Herfoss was faster this time and third, while newly minted SBK champion Jones was fourth. Miller did a better job off the line this time and yet was only fifth. Halliday would perhaps have been happier with sixth at this point and Maxwell settled for seventh from his 12th on the grid.

Miller pulled up with a chain issue and did not complete lap one, but was able to circulate to pit lane. His long face in his pit box told the story.

Meanwhile, Herfoss got past Allerton and Arthur Sissis was up the road a little, just .6 ahead.

In a fascinating and potentially explosive situation, teammates Waters and Maxwell were upon Mike Jones who was sixth. For all the potential of this situation, both riders passed the championship-leading #46 Jones without incident.

It was apparent that Jones was indeed happy to ride for the points needed to take the title.

Up front, the sentimental local favourite Arthur Sissis was doing his best work of the season with Herfoss for company. Waters was up to third, Maxwell fourth while Glenn Allerton found himself down in fifth.

Maxwell had an easy pass on teammate Waters, but for those who thought there were team orders, Waters nearly repassed the #1 Ducati shortly after. he would later reveal it was just due to a very hot tow down the straight from his team mate.

At half distance, Arthur Sissis was putting his speedway skills to good effect and was sliding here and there. Maxwell was now second on a huge charge and we could only ponder the tyre life on the Pirellis.

Lap six, and Maxwell took the lead and pulled out to a .4 second gap. He was riding like a man possessed and some consideration really had to be given to tyre life for the powerful Ducati.

Marcel Shrötter was doing the job for the Thriller Motorsport Team in tenth with West ahead and Metcher behind him.

Herfoss had Maxwell down to under .4 but it was clear there were some tyre degradation issues for some more than others as Sissis dropped to fifth. Shortly after, Herfoss took the lead into turn one of lap nine.

We now had a group of three with Herfoss, Maxwell and Allerton battling on. Waters could see them, but was just a little further back.

The last lap and Herfoss was hungry for his first win of 2022. Maxwell needed the 25 points and Allerton was similarly keen to salute for a win in a winless year.

As we headed to turn 17, the most likely passing point for The Bend, Herfoss did all he could to get a gap. Maxwell looked to be too far back. Allerton and Maxwell were briefly out of their seats and so were the crowd.

Herfoss’ gap was enough. He took his first win of the year at the second-to-last race of 2022.

That would be enough cause for an enormous celebration but for one factor. 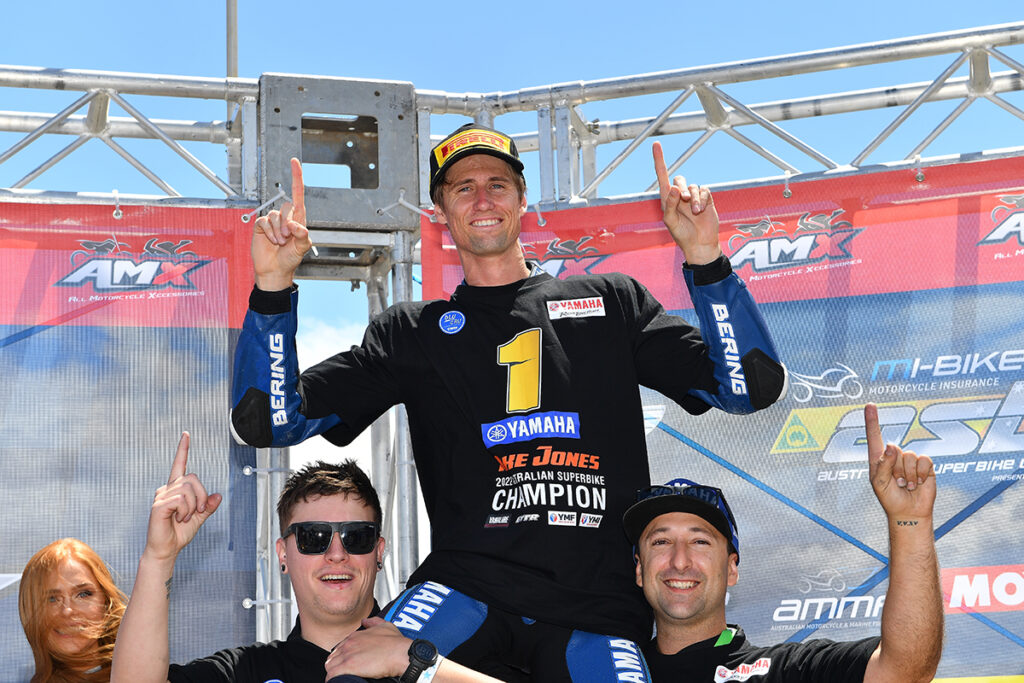 From the start line it looked like Sissis did it again, but it was that guy Jack Miller from full send mode Senna Agius and the always reliable Arthur Sissis.

At turn one, Schrotter and Waters came together to end their run.

Jones was now fourth with Herfoss and Maxwell for company.

Sissis was now feeling some heat and Jones was able to slip by and up into third.

And now we had a scenario for all the fans: Seventeen-year-old occasional Moto2 racer Senna Agius was in second position and chasing full-time MotoGP rider Jack Miller with the 2022 Alpinestars Superbike Champion Mike Jones chasing them both from third place.

So yeah, that happened.

Maxwell was on the move while Jones and Maxwell slipped by Agius to set off after Jack Miller.

Herfoss was close to his new teammate, but Allerton slipped in between the Hondas.

It was all we had dreamed of. Lap after lap of racing perfection from the nation’s finest.

Miller was never more than .2 ahead and Jones was stalking the back of the Thriller Motorsport bike, but Maxwell – in his final ASBK race- was very, VERY hungry to go out on a win.

Miller had Jones get past into turn one of lap six and Maxwell capitalised as well and was up to second. A few corners later, Maxwell took the lead and Allerton moved up to third. Miller was slipping back, but knowing Jack, he wasnt going to go out without a fight.

Maxwell, like Miller before, was leading, but also unable to get away. It was the showdown we all wanted, between the reigning champion and the heir apparent. The leading pair swapped the lead, but Maxwell restored the order while Agius passed Miller for fifth.

It was fast becoming a race for the ages. Maxwell, Jones and Allerton all on the limit. Herfoss worked his way to the back of that group, while the future of Australian racing Senna Agius gave chase ahead of the man of the MotoGP moment, Jack Miller.

Lap eight. Jones was up the inside of Maxwell at turn one, Herfoss was now up to third and Agius was the fastest man on circuit.

Herfoss muscled his way past Maxwell and set off after Jones, who was now .6 ahead.

It felt like Maxwell was losing grip while Jones was able to maintain the pace. Herfoss was keen to repeat his race one victory. Rarely have we seen a top ten with so much hunger for the podium and for the win.

Agius and Allerton swapped spots briefly, with the 40 year old asserting himself over the 17 year old, then Herfoss folded the front and Allerton went out in sympathy with him at turn five.
With less than half a lap left for the season, Jones was now two seconds ahead and kept it on track to take his sixth victory of the year.

Senna Agius took a sensational second place to ensure all assembled keep an eye on him in the coming years.

Maxwell was third in the final race of his ASBK career.

Jack Miller was an outstanding fourth, Sisiss fifth, Halliday in sixth, Ant West in a valiant seventh, local lad Falzon in eighth, Broc Pearson did well to be up to ninth and Joel Kelso was very impressive in tenth. 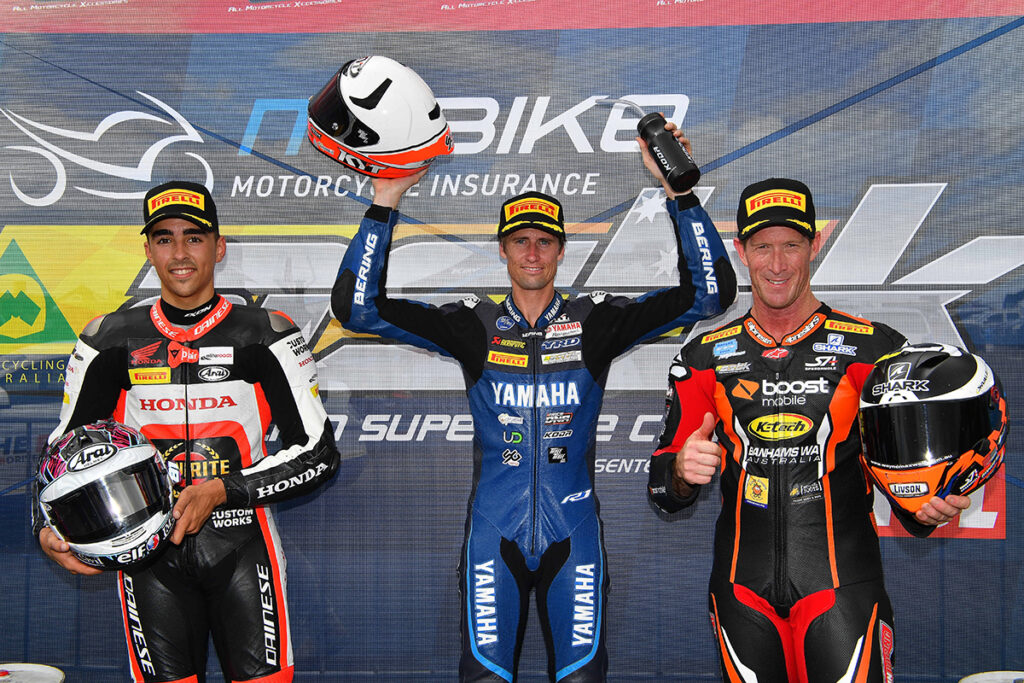 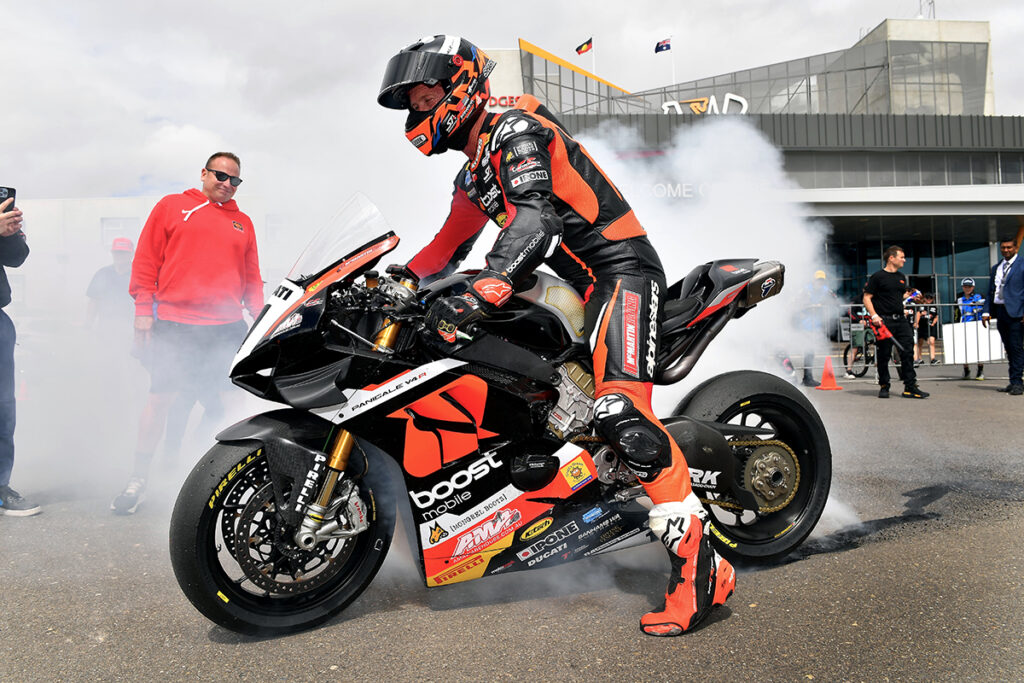