You are here: Home / Supermoto / Another Successful Newcastle International Supermoto
Back 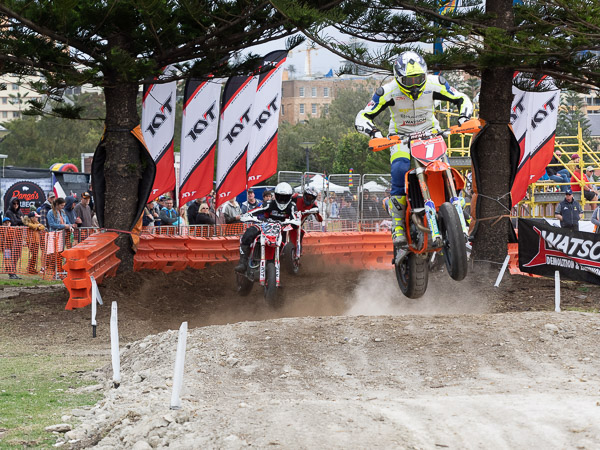 “You could almost say Class was in in a class of his own,” said event organiser Graeme Boyd after the racing. “That would be close to the truth, but he was pushed hard by five time AMA champ Gage McAllister, who did lead for much of the last race. However, it was always going to be tough for McAllister after he clipped a barrier on Saturday and injured his arm. That would have put most riders out for the weekend, so it was awesome to see him ride through the pain to take out second in the FIM Oceania Cup.”

It was an Aussie who took third place – retired supercross and motocross legend Craig Anderson. “I haven’t raced a SuperMoto since 2006,” Anderson said before the meeting, “but I’m really looking for to getting out there and giving it a shot.”

Give it a shot he did, but by his own admission made a few mistakes which cost him dearly in the Australian championship races, but he had that sorted for the international event and finished third in each of the three heats during Sunday’s racing.

A free event in the heart of the harbour city of Newcastle, the Newcastle International Supermoto attracted thousands of spectators from all over Australia and many international competitors from New Zealand, Asia and of course Europe and the USA.

As a free event it would have been impossible to run without the generous support of Visit NSW, the Newcastle City Council, Cooper’s Brewery and a host of local sponsors.

The Australian SuperMoto Championship is heading overseas with Class, but two Aussies took the minor placings – former Superbike racer Ben Attard and WA’s Damon Gibbons. Gibbons was part of a large contingent of riders who made the trek across the country for the event.

The Newcastle International Supermoto also hosted veteran, womens and junior classes of racing, showing the crowd how anyone can get out there and have a go at motorcycle racing.

“While it’s true the crowd numbers were down this year, with closed roads and restricted parking due to the new light rail being built and with poor weather (it was cold, windy with a little rain at different times over the weekend) many people didn’t come in to watch live – but we had tens of thousands watch our livestream over the weekend, which was fantastic to see.

“Hundreds of thousands more around the world will catch replays and highlights, making it one of the most watched events from Australia,” Boyd said.

Hundreds of photos can be viewed at https://nigelpaterson.smugmug.com/Supermoto-Newcastle-2018/